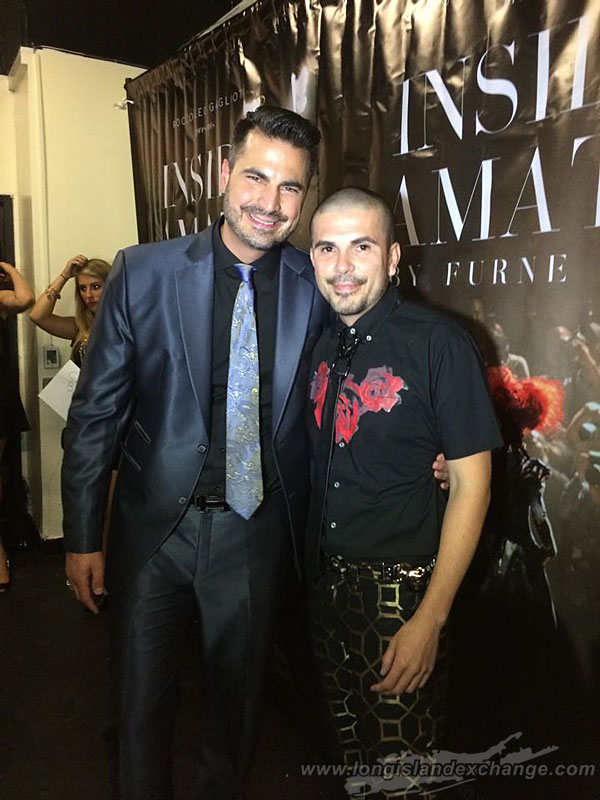 Rocco Leo Gaglioti and Erik Rosete at the Inside Amato Premiere

Zachary/Nathaniel was next to the runway presenting an inspired collection of dark hues, plunging necklines and leather features. Expert draping made for flattering silhouettes in the designs. Garments were expertly paired with sheer fabrics and leather. Tarek Sinno’s rich color scheme of blues, reds and golds accentuated the feminine form with fanciful ornate detailing and unexpected structured features. Striking lines and intricate jeweling elicited excitement from guests and media.

Official Makeup Sponsor The Organic Face and Official Hair Care Sponsor Marrakesh worked with designers bringing their visions to life on the runway. 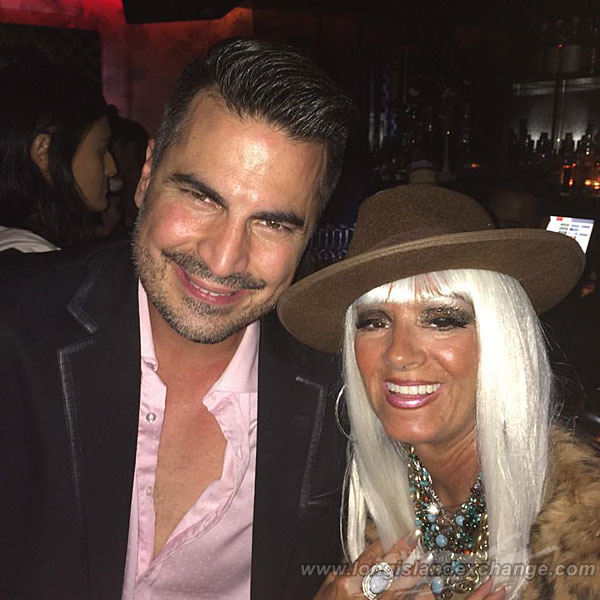 Cognac Wellerlane and Rocco Leo Gaglioti Director of Inside Amato

As a voice for artistic and cutting edge designers, Art Hearts Fashion is paving the way toward the future of Fashion Week. Art Hearts Fashion’s philanthropic drive stretches from coast to coast, putting the spotlight on how fashion can promote constructive ideals and influence the progressive evolution of the fashion industry. Each season, AHF works with the AIDS Healthcare Foundation and Make-A-Wish. Participating designers can be seen on every major Hollywood celebrity including: Beyonce, Lady Gaga, Katy Perry, Niki Minaj, Rita Ora, Jennifer Lopez, Shakira, Miley Cirus, Carrie Underwood, and countless more. The platform is unequivocally intertwined with the causes and organizations it supports.

Special thanks to Art Hearts Fashion sponsors and supporters including: AIDS Healthcare Foundation, VOSS Events, Savvy Traveler, and Monster Energy. The event was produced by Erik Rosete and ParkerWhitaker Productions 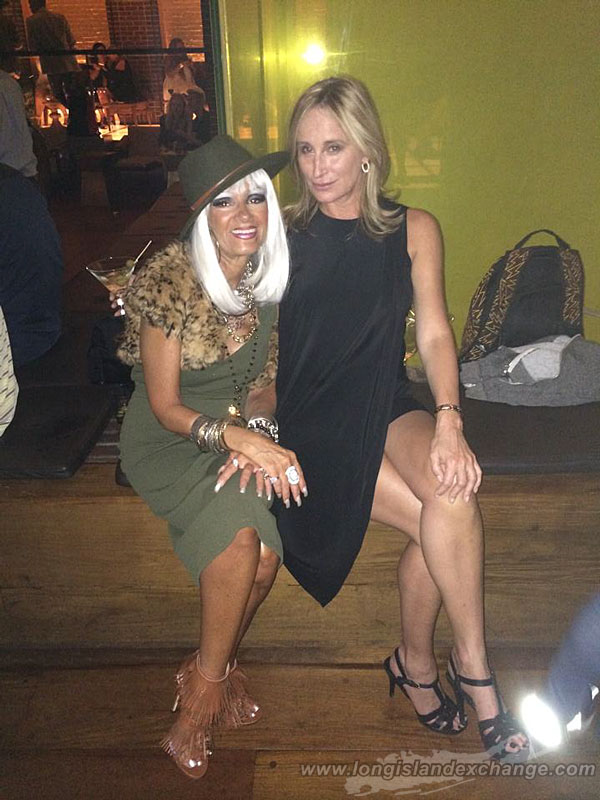 On September 16, 2017 over 2000 guests and celebrities came out for the finale night of Art Hearts Fashion, a decadent event of fashion and film at Liberty Theatre. The Gala kicked off with the film premiere of Inside Amato: A film by Rocco Leo Gaglioti. The intimate film takes the audience inside the fashion house of Amato Haute Couture and behind the scenes with celebrity designer Furne One. Following the premiere, Art Hearts Fashion guests enjoyed a fashion presentation by Divamp Couture followed by a performance by French Pop Star Petite Meller. The presentation featured Divamp’s avant garde futuristic armor and seductive corsets. The highly stylist pieces remained in sight throughout the evening.

film premiere of Inside Amato Directed by Rocco Leo Gaglioti

I also attended a very special evening to promote Soundaffects.org hosted by Malan Breton at his wrap party at the Hudson Hotel on September 15, 2015.

The event was a huge success as guests from all walks of life gathered in the Hudson Hotel to celebrate and mingle with the designer and his A-list guests. Celebrities such as Realty TV Star from “The Real Housewives of New York” Sonja Morgan, Maye Musk, Farrah Krenek, and Dr. Tabasum Mir came to give their support. There was also a special performances by Randy Jackson’s newest artist Wil.

In support of the cancer organization Sound Affects, Malan auctioned off 2 of his dresses one of which was his finale gown from his Spring Summer 2016 show last week in support of the war on cancer! Due to Breton’s event, Sound Affect’s was received more then $10,000 in donations for help fight the war on cancer. Just like his designs, this event was truly amazing and just a taste of what is to come in the future. 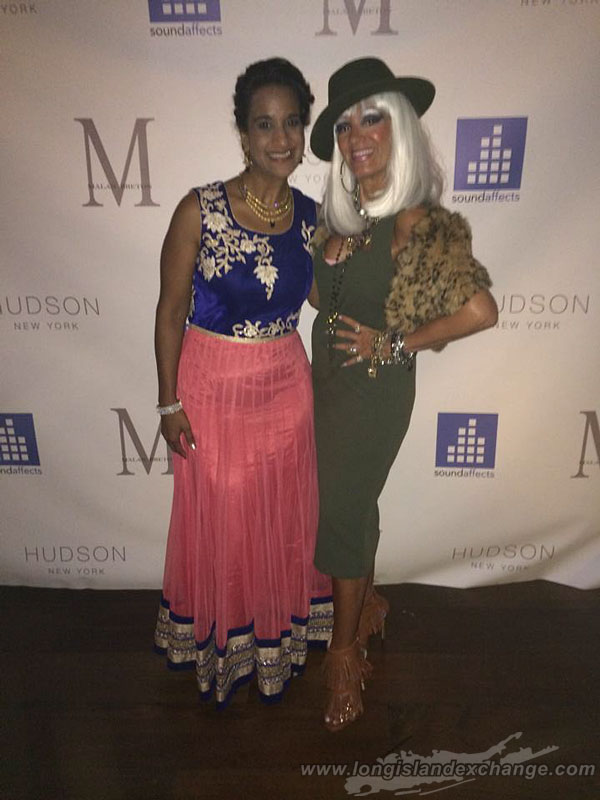 Mona Jhaveri Executive Director and Chairman of The Board of Soundaffects

Soundaffects.org’s mission is to support a crowdfunding platform to connect individuals seeking dramatically improved outcomes with bio-entrepreneurs actively working towards cures. They strategically partner with celebrity and amateur musical artists to promote their approach to revolutionizing the war on cancer. Music is their metaphorical torch.

Sound Affects offers a model for redefining our social contract for the war on cancer. Central to this, They believe the public can and must play a greater role in shaping a more innovative approach to fighting cancer. Their mission is to increase promising treatments in the pipeline by empowering individuals to directly support bio-entrepreneurs, translating research into groundbreaking cancer solutions.

I was honored to speak to Mona Jhaveri Executive Director and Chairman of The Board of Soundaffects.org who expressed, “Soundaffects.org is a charitable organization. We are a new organization and the way we distinguish ourselves is that we are fighting this war on cancer differently. We want to transform how the war on cancer is fought and financed. We are focusing on a new area, not research but what happens when research creates discoveries, cures breakthroughs……the public doesn’t necessarily understand whether or not they actually make it to people to help them. We are focused on that area to translate new breakthroughs and discoveries and into real medicines for people which is what we see in our great talent in our worth.”