(Long Island, N. Y.) 2011’s Insidious, directed by Saw creator James Wan, was a great little horror movie made on the cheap that relied on a thick atmosphere of dread, solid acting, and good, old-fashioned scares that were refreshing in this day and age of lame horror flicks and pointless remakes. It was one of the few modern movies that I’ve seen that really managed to get an audience involved (another that comes to mind is the first Paranormal Activity); people at screenings I attended were yelling, screaming, and talking to the screen, which is ever the hallmark of a great movie.

Of course, Insidious did major bank at the box office, but how could it not? It was a good movie that got widespread word-of-mouth, and it only cost something like a million bucks to make. Personally, with the success of such movies and several high-profile, big-budget flops this summer, I think Hollywood will eventually sit up and take notice. I’m hoping that this means we’ll be getting more cheap movies that take chances because studios aren’t sweating making back the $200+ million that they sank into the budget. And, maybe we’ll start seeing a whole lot less remakes and sequels and more original concepts and off-the-wall ideas? Hey, it’s a thought.

In the meantime, we’re getting a sequel to Insidious, entitled Insidious: Chapter 2, and we already know it’ll be another money-maker for Wan and the studio that backed it, because while the budget was blown up for this new installment, it still only cost $5 million to make; based on the good will (or, since it’s a horror movie, would that be ill will?) its predecessor generated, Chapter 2 should make back its investment on opening night alone…from there, it’s all gravy.

I won’t get too into the plot details other than to recap the basics, since the original ended on somewhat of a cliffhanger: Insidious was the tale of Josh Lambert (Patrick Wilson) and his wife Renai (Rose Byrne), whose son possessed an ability to project his “astral form” into a place called The Further, which is kind of like a waiting room for dead spirits to hang out in until they figure out that they’re actually dead. Anyway, their son’s spirit gets lost in The Further, and the Lamberts enlist Elise Ranier (Lin Shaye), a woman with psychic abilities, to help guide Josh into The Further to find his lost son before lost ghosts hijack the kid’s empty body. This leads to a confrontation with a demon who looks like a cross between Darth Maul and a ballerina…wait, what?

In fact, that’s the one point in an otherwise chilling and scary movie where Insidious went off the rails- building up the big, scary boogeyman the entire time, but when the curtain is finally drawn aside…he’s actually almost laughable. No, not almost, he WAS laughable. Seriously, if they couldn’t come up with a scary-looking dude, they should have just continued to keep him hidden. But they didn’t, and Darth Maul remained the one wart on an otherwise great film. 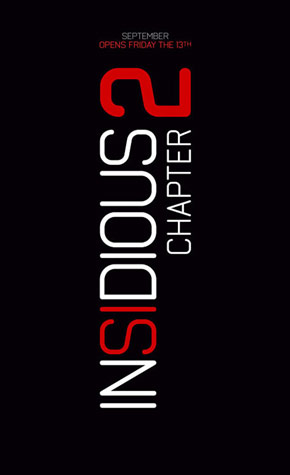 Insidious: Chapter 2 picks up right where the end of the first film left off, with Josh seemingly possessed by this creepy old lady spirit who has been haunting him since he himself was a kid. It seems that she jumped into his body while he was guiding his son home out of The Further (he thought it would be a good idea to stop and taunt her, the dummy), and Chapter 2 deals with the repercussions of Josh’s possession (no one knows at first, despite Josh killing Elise by strangling her), and the origins of the “old woman” that is currently inhabiting his body (hint: she’s…um, not quite what you think) and the quest to retrieve the real Josh, whose soul is trapped in The Further. What follows is…well, a lot like the stuff that happened in the first movie, actually.

And that’s the weak point of Insidious: Chapter 2. It feels less like its own movie and more like a Greatest Hits version of the original. The sequel hits a lot of the same beats as the first one and many of the scary events feel almost recycled. That’s not to say that there are no original bits of spookiness in Chapter 2, but after the fresh-feeling experience of the first movie (despite it being somewhat derivative of films like Poltergeist), it is a bit of a disappointment not to have that same type of experience this time around.

But Chapter 2 is still a very good horror movie with some excellent jumps, and I’m astounded that James Wan is capable of churning out so many quality films so quickly. I mean, didn’t The Conjuring just come out, what, a month or two ago? And he’s currently filming the next entry on the Fast and Furious series (replacing director Justin Lin)? The man is a machine, I’m telling you. And it helps that his cast is uniformly superb, with Patrick Wilson and Rose Byrne really standing out and getting you to feel their respective plights. It’s something that most horror films can’t be bothered with…normally, they’re just interested in getting to the next kill or sex scene.

So, while not quite as good as the original, Insidious: Chapter 2 is still a worthy entry in a noteworthy and effective horror series. Plus, you know it’ll make tons of dough, and the ending leaves everything wide open for a sequel, so I think it’s safe to say that Wan and company will be making yet another trip into The Further again soon. I’m looking forward to it.