(Long Island, N. Y.) Well, after Marvel conquered the world with the build-up and release of the ultimate comic book team-up movie, The Avengers, “Phase Two” (meaning the systematic build-up the eventual release of Avengers 2) is officially underway with the subject of today’s review- Iron Man 3.

Written and directed by series newcomer Shane Black, replacing Jon Favreau (who helmed the first two installments), Iron Man 3 has washed the bad taste of the disappointing IM2 out of my mouth, and while it doesn’t quite reach the heights of awesome that the original film did (itself the official kick start of
the so-called “Marvel Cinematic Universe”), it’s still a great installment, and in very many ways a breath of fresh air for the series in general.

Okay, we all know the story…billionaire playboy genius inventor Tony Stark (played by the main reason these movies are so enjoyable: the wit, quirkiness, and humor of actor Robert Downey, Jr.) invents a crude suit of robotic armor while held captive by terrorists in Afghanistan, eventually using it to escape. Once back in the civilized world, the previously free-wheeling Stark develops a conscience and fine-tunes his armor design into a cutting-edge combat machine and uses it to defend…I don’t know, I guess humanity? We never really see him patrolling neighborhoods like Spider-Man, but instead taking on more personal, global threats, such as terrorists, evil war profiteers, gods, and aliens. But he means well enough, and that’s what counts.

Anyway, stricken with Post-Traumatic Stress Disorder after his near-death experience in the climax of The Avengers, Tony has retreated into his lab, and spends the opening of Iron Man 3 dealing with his issues by estranging Pepper Potts (Gwyneth Paltrow), his girlfriend and CEO of Stark Industries, and building lots and lots of suits of experimental armor. However, Tony is brought out of his reclusive state when the activities of a mysterious terrorist known only as “The Mandarin” (Ben Kingsley) hit close to home, putting his right-hand man Happy Hogan (Jon Favreau) into a coma. When Stark calls out The Mandarin on live television, the madman strikes Iron Man where he’s most vulnerable, and as far as the world is concerned, Stark doesn’t survive the onslaught. 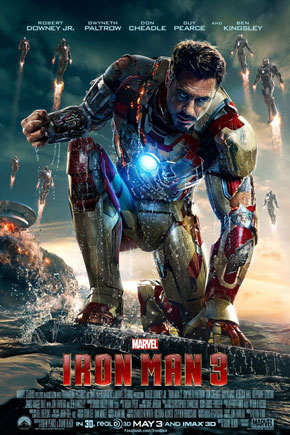 However, Tony not only lives, but (through circumstances I won’t get into here), he finds himself all-but marooned in rural Tennessee with a damaged suit of armor and a mystery on his hands to solve: who is The Mandarin? What is his connection with a dangerous scientist named Aldrich Killian (Guy Pearce)? Why are people glowing and blowing up for no good reason? Will Tony ever be able to hear the phrase “New York” again without freaking out? Why was I the only person in the theater who got the Westworld joke? These questions and MORE will be answered before the credits roll (well, except one, which kinda gets answered AFTER the credits).

First of all, Iron Man 3 is nothing like the first two films in the series…but I mean this in a good way. There’s actually a sizable chunk in the middle with zero Iron Man action at all, but I didn’t care ’cause it was still entertaining. Tony ends up spending a portion of the film as a gumshoe of sorts, and I couldn’t believe that during this segment they gave him a kid sidekick (played by Ty Simpkins) and the kid WASN’T ANNOYING. Usually, that’s instant death for a film.

In fact, some of the strongest parts of Iron Man 3 come from Stark’s seamless camaraderie with this boy, and while the overall story at times comes across as rushed and convoluted at times (and “been there, done that”- after all, when it comes down to it, Tony’s fighting yet another war profiteer), it’s also packed with engaging character interactions that really feel genuine. Hilariously mean-spirited at times, but genuine.

But don’t worry…there’s plenty of action and things going kaboom as well. In fact, with director Shane Black (who you might remember playing the dirty joke guy from Predator) calling the shots, Iron Man 3 is probably far more violent than both of the previous films in the series put together. The effects are fantastic, and the climax (involving countless remote-controlled suits of armor vs. an army of genetically-enhanced super-humans) is pretty mind-blowing. After the lackluster Iron Man 2, Shane Black has knocked it out of the park for the third installment, and while the ending gives the trilogy a sense of closure, it also thankfully leaves things wide open for more potential sequels.

I only have two real problems with the movie: one was the whole “running the suits by remote control” thing. At points in the film, Tony dons a headset which gives him the ability to pilot the suit remotely with as much precision as if he were actually wearing it. Why does he ever need to wear the armor and put himself in danger ever again? He could just hang out in his living room watching TV and if Iron Man loses, no big deal. Hell, JARVIS (Stark’s computer AI system, voiced by Paul Bettany) even controls multiple suits at once at a certain point of the film…apparently we don’t need Tony at all anymore? Not a big deal, but whatever.

And that bring me to problem number two…if I was a fan of the Mandarin as he was depicted in the comic books, there’s a twist concerning his character that would have infuriated me. But I’m not, so I personally didn’t care (in fact, I enjoyed the twist in a way, mostly because Ben Kingsley is awesome). However, without spoiling anything, this twist might also tick off casual fans unfamiliar with The Mandarin based on the advertising campaign, which portrays him in a way that is in direct opposition to how he is ultimately revealed to be in the movie itself. Again, I found the film enormously entertaining regardless, but I could completely understand how people might feel disappointed when the character of The Mandarin, who is built up like a grandiose super-villain, is undermined in a way by the aforementioned twist. I can’t say any more than that…and I might have said too much already.

Otherwise, Iron Man 3 is a great movie, a refreshing departure from the norm, and a more-than-worthy addition to the already-stellar Marvel movie lineup. Go check it out, but considering the fact that it just had the second-biggest opening weekend in history, chances are you already have.

Up next on Marvel’s cinematic plate later this year is Thor 2, and I for one know a certain young lady who can’t wait to see if series baddie Loki gets his hair under control after how messy it was in the trailer. Loki fans are strange.