(Long Island, N.Y.) I’d given up on Adam Sandler long, long ago…2010’s Grown Ups was pretty much the final straw for me when it came to ever expecting a semi-amusing film from him ever again. Well, leave it to Sandler to drive that point home with the instant death that is Jack and Jill, the movie that seems to have been the result of a concerted scientific effort to create the most reprehensible piece of garbage ever committed to celluloid.

If you’ve seen the trailer, then you pretty much already know what you’re getting into… Sandler plays Jack Sadelstein, an advertising executive with a disgusting, needy, ill-mannered, flatulent (apparently we’re not too old for non-stop fart jokes) twin sister, Jill. The catch, of course, is that she’s played by Sandler in drag! Doesn’t that already make you want to hurl in delight at the comedic prospects? Huh?

Of course, Jack has a wonderful wife (played by the ever-slumming Katie Holmes…you’d think hubby Tom Cruise would pull a few strings for the poor girl), all of whom think Jill is awesome and that Jack just isn’t giving her a chance. But trust me, folks…she’s one of the most unlikable characters ever conceived, and Jack and Jill takes every chance to drive that point home to the audience, over and over.

Of course, the kicker comes at the end, when we’re suddenly expected to forget the previous 90 minutes of the film and suddenly embrace Jill not in spite of her faults, but because of them. 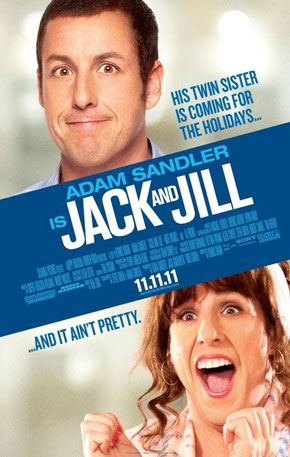 Jack and Jill is juvenile, unfunny, and just plain stupid, with more blatant product placement than any recent movie I can think of. Now, there was a time, long, long ago, when Adam Sandler actually made

some amusing films. I’ve never really been a fan of his, but I never used to shudder with the anticipation of brutal torture whenever one of his trailers hit the theaters. Now, it’s like the guy just doesn’t give a damn about what scripts he accepts.

And, apparently, a lot of other celebrities feel the same way, based on the sheer amount of big-name cameos in this movie. Of special note is Al Pacino, playing himself. Seems that one of Jack’s big accounts, Dunkin’ Donuts, wants Pacino to do a commercial or they’re taking a walk. Oh, and in an “ironic” twist of fate, Pacino also falls madly in love with Jill and Jack has to help set the two up to help the Dunkin’ Donuts deal go through, which I guess is supposed to be really funny or something.

But Pacino isn’t the only actor disgracing themselves here. Johnny Depp, Regis Philbin, Drew Carey, Shaquille O’Neal, and a whole host of others pop up for a quick paycheck and a tiny bit of erosion to their immortal souls. Oh, and apparently Dana Carvey felt THIS was the movie to come out of retirement for. Smart move, Dana. It’s not like I’d want to see another Wayne’s World movie (actually, yes I would).

So, Jack and Jill: it’s as bad as you expected it to be. It’s as bad as all the critics are saying. And, of course, I’M saying it’s bad, and when I say a movie is bad…well, it’s really time to run for cover, folks, because my standards are pretty much in the gutter. Avoid at all costs, let we get treated to Jack and Jill 2…and 3…and 4…