On the one hand, it’s almost fashionable to bash on the guy; he’s considered somewhat of an eccentric by the public at large, what with his devotion to Scientology, the infamous couch-hopping incident on Oprah Winfrey’s talk show back in the day, and other sundry quirks that have been pestering him later in his career. However, when you take a step back and judge the man solely on his work…you’ve got to admit, the man brings the goods pretty much every time he gets in front of the camera.

He’s got acting ability, charisma, intensity, physicality…as much as I may hate to admit it, the dude’s a total package, pretty much. I guess there’s a reason his career has spanned so many decades; people are able to separate the entertainer from the man and simply enjoy his performances.

Jack Reacher is the name of Cruise’s latest cinematic effort (he plays the eponymous title role), and again, he surprises me. The previews and trailers, I thought, looked horrible…just total cheese-fests oozing with clichéd dialogue, describing Jack Reacher more or less as “a man who doesn’t play by the rules” and “who just cares about right and wrong” or something dumb like that. My opinion further soured when I found out that Reacher is based on a series of crime novels by a guy named Lee Child, wherein the character being brought to life by Cruise is supposed to be an unstoppable force of nature who clocks in at 6’5″ and 250lbs; stats that Cruise clearly fails to even closely achieve. It just seemed like a classic case of miscasting, and one that

would render the film unwatchable, I figured. 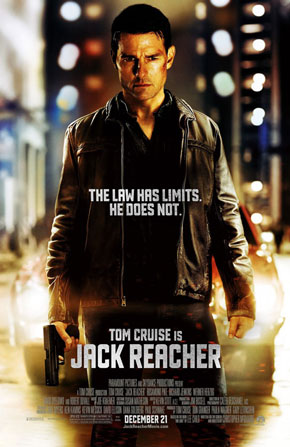 Yet, hadn’t Cruise been seemingly miscast before, only to prove the naysayers wrong? I remembered back when he had been announced as playing Lestat in the film adaptation of Anne Rice’s Interview with the Vampire, causing an uproar with fans of the novel…I myself being one of them. After all, how could this prissy little pretty boy play such a devious and complex character? Even Anne Rice herself was furious by the casting choice. However he ended up being great in the role (even Rice herself apologized after seeing the finished film), and successfully opened up my mind to the idea of actors effectively being cast against type. It’s a glorious thing when it works.

But every few years it appears that I need to be reminded of that idea…thankfully Cruise has done so yet again.

Jack Reacher (Cruise) is a direct, no-nonsense, former Army Military Police officer who gets caught up in an investigation of a former army sharpshooter (Joseph Sikora) accused of murdering five random people. Obviously it’s a setup, as the case against this guy is just TOO perfect, but no one is buying his proclamations of innocence. So, who does the suspect call for help? Jack Reacher, of course, who is sort of like a one-person A-Team; he lives life now as a drifter and only pops up when he’s needed to right wrongs. Or something.

But not only is Reacher a great military detective who gets to the bottom of things, he’s also a monster of a human being who can dismantle five bar thugs in a brawl like it’s nothing. Despite not possessing the supremely imposing measurements of his literary counterpart that would make such a feat easy to believe, Cruise instead has to rely on other physical gifts. But in the end, he still gets the job done. I suppose I might feel differently if I was a fan of the books, but as an outsider

to the whole Jack Reacher thing, I just didn’t care…today’s action heroes unfortunately aren’t giant, massively muscled Austrians who can body-slam men occupying actual phone booths (remember those, cell phone users?), so I guess I have to be satisfied with tight editing and good choreography instead. Luckily, Reacher has plenty of both.

The inclusion of awesome German filmmaker and occasional actor Werner Herzog as the villain only kicked things up into the stratosphere for me, and as Reacher beats bad guys and

pieces together the mystery behind his friend’s frame-job, Herzog provides one of the scariest characters since his fellow countryman Diter Laser (greatest name ever) starred in The Human Centipede. Why are Germans so damn scary?

Jack Reacher is fast-paced, well-acted, and is pretty much just a fun film to watch. The fights and stunts are well-done and edited with an eye for fluidity and detail, and

there’s a pretty darn nifty car chase scene that pretty much tops any I’ve seen in the last year or so. No, when the movie ended I didn’t step out of the theater thinking I had just witnessed the birth of the next great action franchise, but I nonetheless felt I had spent my time wisely and would certainly enjoy seeing a sequel down the line. You might as well, so I recommend that you give Mr. Cruise’s latest effort a shot.