(Long Island, N. Y.) Jack the Giant Slayer has been getting ripped apart early on by both critics and audiences alike based on the fairly lame advertising campaign that predated its release. That’s a common problem in the movie business…the quality of a trailer can make or break a film, and a bad one can totally sink it.

There have been several recent high-profile box office bombs, most notably John Carter and The Last Stand, and many point the finger of blame not on the quality of the films themselves, but on trailers that perhaps

weren’t representative of the quality or actual content of the final product.

However, I can’t say that was the case with Jack the Giant Slayer’s recent floppage at the box office on its opening weekend. I can say with the utmost authority that the somewhat bland trailer that’s been running in the months leading up to its release perfectly represented the somewhat bland feature it was pushing on audiences.

Director Bryan Singer, who helmed the first two successful X-Men movies (and the upcoming X-Men: First Class sequel Days of Future Past) has made a $200 million stumble Jack the Giant Slayer. An update of the classic children’s fable Jack and the Beanstalk, the movie tells the rather uninteresting tale of the eponymous Jack (Nicholas Hoult) a loser who stupidly sells his uncle’s horse for some supposedly magical beans (well, the beans were actually collateral, but whatever). Said beans are capable of growing beanstalks miles high when exposed to water, which Jack is warned about before the new owner of his Uncle’s horse rides off. 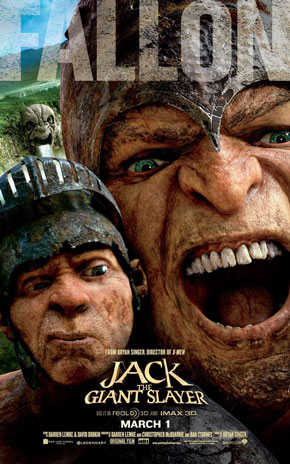 However, Jack’s new beans were actually stolen property; see, the back story of the movie establishes

that a previous giant beanstalk had reached the realm of giants far above the clouds, prompting an invasion by the unstoppable behemoths that were only stopped by the king of that era and his magical crown, which essentially makes the wearer the king of the giants. Banished back to the clouds, the land soon settled back into peace.

Such things eventually faded into legend, but the beans and the crown still exist, and are part of the plans of the evil Lord Roderick (Stanley Tucci) to take over the land and gain the hand of the princess, Isabelle (Eleanor Tomlinson). When Jack gets mixed into the picture by accidentally growing a mammoth beanstalk of his own that takes his house and the princess up into the clouds, he’s charged by the King to ascend the huge green veggie to the land of the giants with his

royal guard and get her back. Unfortunately, Roderick has the magic crown and his own plans…

Bland, middle-of-the-road, ‘eh’…any phrase or cliché that conveys mediocrity also describes the experience of watching Jack the Giant Slayer. It’s by no means a bad movie, but one devoid of any excitement, laughs, or interesting developments. The plot speeds along fast enough, so it’s never really boring, but it’s never really engaging on any level either. The dialogue, the action, the storyline…nothing really grabs you, so you just settle into a haze and wait until the credits.

However, there IS a good-natured air throughout the proceedings that make it tough to actually hate the movie. Plus, the giants themselves, while goofy-looking in a design sense, are still pretty effective and fun antagonists. That’s something I feel the need to say, lest I come across

as a hardcore detractor of Jack the Giant Slayer; despite my criticisms, it certainly has some

The performances are solid, but out of the entire cast I’d that say Ewan McGregor, who played Elmont, the head of the King’s Guards, was the only real high point of the movie. Successfully playing a cocky bad-ass with a humorous air, McGregor was pretty much the only character with any personality. Stanley Tucci was a decent villain, and I guess Nicholas Hoult was likable enough as Jack, but none really jumped off the screen like McGregor did with his arrogant swagger.

A lot of ire has also been directed at the quality of the computer effects that fill pretty much every frame of the movie; and while they are indeed highly-detailed and well-animated, there’s something just…off by it all. Things don’t quite look real. It’s hard to point out the problem, but the movie doesn’t quite look like they got every cent out of its bloated $200 million budget. It’s possible that the filmmakers took this approach on purpose to make the movie look more storybook-like, but overall, the visuals are a bit underwhelming. They do, however, convey an effective sense of scale, so it’s not a total failure.

Jack the Giant Slayer might be an okay movie for kids (despite its PG-13 rating, there’s really nothing objectionable about its content), but most adults will be bored or, at best, barely entertained. Approach with caution; hopefully Director Bryan Singer will put forth a better effort with the next X-Men installment.