(Long Island, N. Y.) I’ll admit it…I’m a Jackass fan. From the 2000-2002 MTV television show and the three films that followed, I’ve always gotten a hugely perverse kick out of Johnny Knoxville and his band of mentally unbalanced misfits as they engaged in all manner of skits, pranks, and stunts, most of which involved pain, injury, nudity and/or some form of bodily excrement.

2010’s Jackass 3D, while inspired at times, for the most part just felt like the well had finally run dry. The whole gimmick was just starting to feel forced, and perhaps it was just time for these guys to retire and get normal 9-to-5 jobs. I mean, they’re almost all in their 40’s now…time to grow up, right?

However, to my surprise, there is now a fourth Jackass movie, and it actually succeeds where the previous one faltered. How, you may ask? By upping the ante? Nope…by stripping the Jackass concept down to its core and, believe it or not, taking just one skit and stretching out for the entire duration of a feature-length film. Sounds crazy? Yeah, but that’s Johnny Knoxville for ya. 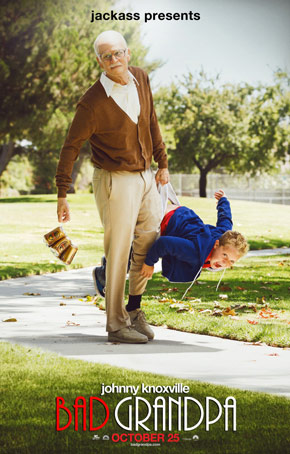 Jackass Presents: Bad Grandpa is centered around Knoxville’s Irving Zisman character; hidden under layers of latex and make-up, he plays a cantankerous 86 year old man whose outrageous behavior is tempered by the begrudging slack the victim of his pranks typically gives to the elderly. After all, those old folks can’t help getting their genitals stuck in vending machines, can they?

Much like Sasha Baron Cohen’s Borat character, Bad Grandpa’s gimmick is all about the fact that people generally don’t take the elderly (or, in Borat’s case, foreigners) all that seriously, so when Knoxville rolls into an all-black strip club on ladies’ night in full Zisman mode and offers patrons a “serving of Irving,” the women laugh it off.

Until he drops his drawers and lets it…um, all hang out, so to speak. Then all hell breaks loose, and the harmless old guy is no longer quite so harmless? But hey…it’s all in good fun.

Much like Baron Cohen’s 2006 Borat movie, Bad Grandpa is a series of hidden-camera skits that prey upon the unsuspecting public, loosely stitched together by a storyline involving Zisman taking a road trip with his grandson Billy (Jackson Nicoll). It seems that Billy’s mom is off to jail and the newly-widowed Zisman has his dreams of womanizing dashed when he is reluctantly charged with the task of delivering Billy to live with his deadbeat dad.

What follows is a cross-country journey involving strip clubs, flatulence, bingo halls, shoplifting, corpse humor, property destruction, heavy-handed (and unsuccessful) pick-up techniques, malfunctioning kiddie rides, twisted child beauty pageants, binge drinking…basically all manner of tomfoolery, but, shockingly enough, all tied together with a slight emotional edge and some genuine heart that a film like this desperately needs in order to avoid being just another gross-out comedy. It’s not as gut-bustingly hilarious as perhaps it aspires to be, but it’s still consistently funny and enjoyable.

Knoxville, while displaying his usually comic timing and improvisational abilities, also surprisingly manages to inject Irving Zisman with a bit of a soul as well. Little Jackson Nicoll matches Knoxville’s performance as an adorable, baby-faced boy with the heart of a devil (he reminds me a lot of the Man Show Boy, if anyone remembers that kid). It’s no spoiler to say that, over the course of their road trip, Zisman and Billy form a bond, and that slow-building affection is genuinely touching…when grandpa isn’t blasting diner walls with his excrement, that is.

Jackass Presents: Bad Grandpa isn’t for everyone; but if the idea of a man and his grandson engaging in a heart-warming afternoon of fishing on the very same bridge that they just tossed grandma’s dead body off of, then Bad Grandpa is for you.