(Long Island, N.Y.) You know, people are always ready to hate when one of the big boys takes a fall in Hollywood. Everyone was writing off John Carter, Disney’s big $250 million dollar sci-fi/fantasy epic, as the next Ishtar before it was even released. Based on the first of a series of novels penned by Edgar Rice Burroughs way back in 1912 (the first of the “Barsoom” series, titled “A Princess of Mars”), John Carter is the live action directorial debut of Andrew Stanton of Pixar fame; the man who had previously given mankind the precious, undeserved gifts known as WALL-E and Finding Nemo… two of the finest animated films ever made.

WALL-E in particular is an all-time favorite of mine…I remember back when I reviewed it that I had just given my first four-star review to Frank Darabont’s horror flick The Mist, and a mere three-and-a-half stars to Stanton’s WALL-E. Ah, hindsight…I’ve said this before, but I should have transposed those scores, or at least just given WALL-E four stars of its own. They’re both amazing movies, but the emotional resonance of WALL-E edges out The Mist just a little,

Anyway, as I said, John Carter is Andrew Stanton’s first gig directing flesh-and-blood actors. Don’t get me wrong, there’s lots and lots (and lots and lots) of computer generated people in this movie as well, but give the guy a break, okay? Maybe in his next movie he’ll move on to a cast that’s maybe 75% real.

Now, as well read as I am, I’ve never actually read any of Burroughs’ novels (although I did just download “A Princess of Mars” for free on my Android Kindle app…yes, it’s free, go check it out), but I am aware of their esteemed reputation, even if the Barsoom series would be considered a tad obscure by today’s movie-going public. But from what I’ve heard, Stanton’s adaptation is fairly faithful, which appears to be its strength…and its’ failing. 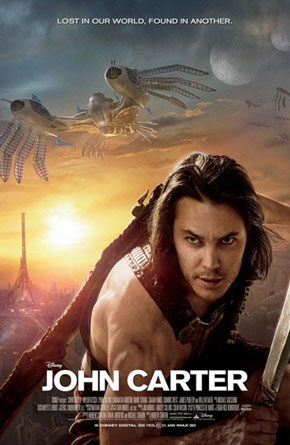 The movie is set during the Civil War era, and revolves around the eponymous John Carter (Taylor Kitsch, who I only remember as Gambit in the crappy Wolverine movie), a Confederate Army captain who mysteriously finds himself transported to the planet Mars (or “Barsoom,” as the inhabitants call it), where he is forced to take part in conflicts that are tearing the planet apart. Along the way, Carter gets

mixed up with Princess Dejah Thoris (Lynn Collins), and decides, like most hero types eventually do, to save the planet.

Now, you’d think that a simple human wouldn’t really be all that pivotal to world events when he’s surrounded by giant four-armed Martians, but Carter’s got a similar deal to Superman: due to Mars’ lower gravity and Carter’s greater bone density, he has super-human strength and jumping abilities, which is pretty cool. But in contrast, I guess Martians would be pretty wimpy on Earth, huh?

Back on track…the world of Mars…er, Barsoom, is brought to life with a rather stunning mixture of live-action actors and locations mixed with a generous helping of

expertly-rendered CG. The various computer generated creatures, vehicles, and landscape embellishments all blend together seamlessly with the practical elements- you never once get the feeling that these are just actors standing in front of a green screen. Some of the design choices, however, while true to Burroughs’ novels, might be considered suspect by some, evoking far too many deeply buried memories of the horrid Star Wars prequels. But there’s no denying that, visually, John Carter is beautiful…but EVERY movie is beautiful these days, and it takes a truly great story populated with likable characters to really put a movie over the top, and in that respect, John Carter stumbles a bit.

all, if someone’s backing your picture to the tune of $250 large, it’s a given that they expect massive box office numbers right out of the gate. That’s a huge load of pressure to put on someone, and for the most part, Stanton (who also co-wrote the script) did a fine job directing the movie. He’s obviously a master storyteller, but where the movie falters is in its complexity; there’s just too much going on, to the point that the movie becomes murky and hard to follow.

Breathtaking action scenes are separated by long stretches of tedium, and it’s not clear what age range Stanton was aiming

for- while he succeeded in crafting tales that appealed to both kids and adults (without alienating either) with WALL-E and Finding Nemo, John Carter feels awkward when attempting to adhere to its PG-13 rating, since it otherwise feels like a children’s movie; it is without any of the subtle sophistication that would appeal to a grownup, making me think that maybe they should have just gone for a full-on PG rating instead.

Taylor Kitsch, who I found to be horrible in Wolverine, actually does a solid job here as John Carter. He’s athletic, charismatic, and…well, I have no other words that end with “tic,” but suffice it to say that he’s good. Lynn Collins as the Princess of Mars does an amazing job of looking hot and half-naked, but thankfully she’s a fine actress as well, or all that would be for naught. She also shares some good chemistry with Kitsch, and seeing as how the central theme of John Carter is romance, that’s a good thing…certainly better than if they started stabbing each other to death on-screen, I would think.

With a backing cast consisting of Willem Dafoe, Thomas Haden Church, Dominic West, and Mark Strong, John Carter pretty much delivers when it comes to the acting and eye candy. It’s a shame that the story is such a mess, and that the film itself doesn’t as seamlessly walk the fence between adult and child fare like Stanton’s previous works do. Don’t get me wrong, John Carter is still a more entertaining and rewarding experience than 99% of the crap that’s released nowadays…even though he’s not on his “A” game, Stanton still proves himself a superior writer and director who imbues his characters with memorable personalities.

Despite its problems, John Carter never ceases to feel like a true attempt to create something special, as opposed to just being a typical soulless, focus group-tested, by-the-numbers Hollywood attempt to kick-start a franchise. And for that reason alone, it’s worth going to see it.