(Long Island, N.Y.) Taking the pro wrestling world by storm, Dwayne Johnson (AKA The Rock) left at the top of his game to pursue leading man roles in Hollywood, and with his charisma and impressive physical attributes, he seemed poised to take over the action movie crown for this generation. Hell, even the Austrian Oak himself, the godly ARNOLD, passed the torch to Johnson via a cameo in one of his early films. So, with all that going for him, did Johnson find a way to screw it all up? You betcha.

While initially making a few solid yet unremarkable action flicks and even being cast against type in a few ensemble pieces, Johnson soon tired of success and acclaim and started picking some of the worst scripts imaginable, many of them lame kiddie movies made by the Walt Disney. For a while there, it was clear that Johnson was purely out to make a buck while taking the express train to Scrubsville; clearly, a Syfy Channel movie of the week appearance was soon in the cards.

However, Johnson’s career is in something of an upswing lately. He’s cut down on the inane kid movies and embraced more mature, action-oriented fare once again- killing, cussing, and just generally being a bad-ass. Perhaps he stopped picking random scripts out of a barrel while blindfolded? Who knows, but while Johnson is making an attempt to actually live up to his huge potential now, it’s clear that he still wishes to maintain his relationship with Disney, hence the subject of today’s review: Journey 2: The Mysterious Island, a film that, while geared more for children, still actually manages to entertain those of us who are actually potty-trained as well.

When I first saw the poster for Journey 2: The Mysterious Island, I thought the “2” was an attempt to hip-hop up the title or something stupid like that. However, in reality this flick is supposed to be a sequel to a 2008 Brendan Fraser movie called Journey to the Center of The Earth, which I never saw (but I’m sure it had precious little to do with the classic Jules Verne novel it took its name from). Anyway, since I never saw the 2008 movie, I’m not sure how Journey 2 is a sequel, since Fraser is out, The Rock is in, and I don’t know if any of the other cast members from the original returned or not. 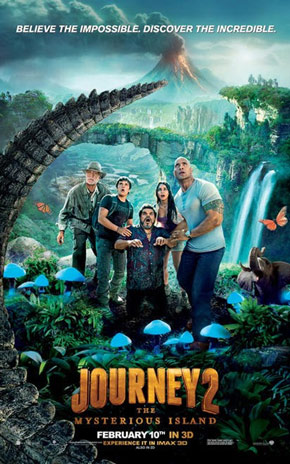 But it doesn’t really matter if you saw the first movie, since the story here is as simple as they come: Sean (Josh Hutcherson) has a new step-daddy named Hank (Johnson). They don’t get along (I was waiting for the inevitable cry of “YOU’RE NOT MY REAL FATHER!” at some point, but sadly, it didn’t happen). One day Sean gets an enigmatic, secret coded message and, in the spirit of bonding with his annoying twerp of a stepson, Hank uses his Navy training to help him decipher it. The message reveals that Sean’s explorer grandfather has discovered…Mysterious Island! Yes, the very same one from the Jules Verne novel of the same name.

Anyway, here’s the thing that had me confused (besides everything else)…they don’t explain ANYTHING to the audience. I’m not joking when I say the scene plays out exactly like this:

Sean: “Wow, grandpa discovered Mysterious Island! I have to go there right now!”

And they go! It’s never explained what Mysterious Island is or what they expect to find there, or even why it’s so damn mysterious to begin with! Heck, we’re barely even introduced to the characters themselves before the adventure gets rolling…seriously, it’s like an ADD-afflicted three-year-old wrote the script and just couldn’t wait to get to the good bits. The movie very much depends on the fact that A) you’re intimately familiar with the works of Jules Verne, and B) you’re intimately familiar with the previous movie. Luckily, I’ve read quite a bit of Verne, but I inwardly pitied audience members who hadn’t…at least the ones that actually care about silly little things like a reasonable plot.

But once you get past this bit of juvenile nonsense and our duo arrives at Mysterious Island via a dim helicopter pilot named Gabato (Luis Guzmán) and his daughter Kailani (Vanessa Hudgens) and meets up with Sean’s grandpa (Michael Caine), the movie actually turns out to be quite fun and even charming to a certain degree. Mysterious Island is home to all sorts of wacked-out creatures and stunningly beautiful environments, and the CG used to bring them all to life is actually pretty convincing as our gang traverses the land and gets into all sorts of adventures. However, things get real when it’s discovered that, out of the thousands of years that Mysterious Island has existed, THIS is the day that it’s going to sink into the ocean (huh?), and the gang has to discover a way off the island before it’s too late! But wait, don’t they have a helicopter to escape in? Oh, yeah…I didn’t mention that Gabato’s helicopter had crashed when they first got there. Well, it did. They’re stuck.

I could go on about how nice the abundance of CG in this movie looks, but I could say that about 99% of the movies made nowadays, so what’s the point? Instead, let’s ignore that, and the borderline-retarded story, and instead talk briefly about what makes Journey 2 work as shockingly well as it does: the actors. Simply put, Dwayne Johnson has charisma. Even in his worst films, he’s very likable, but when paired with some greats like Michael Caine and Luis Guzmán (all of whom have excellent chemistry with one another), you have a film that could have been very generic, but instead gets you all warm and fuzzy. Shocking, I know!

Plus, Johnson was clearly bulking up for the new G.I. Joe movie he’s starring in while filming Journey 2, as he’s FREAKING HUGE here. There’s actually this bizarre scene where people are bouncing wild berries off The Rock’s pecs, because…well, I’m not sure why. The whole scene was actually disturbing and weird, actually. But the point is: he’s an all-the-way big dude.

I can’t end this review without mentioning the short film that plays before this movie. It’s a Looney Tunes number called Daffy’s Rhapsody. It’s a CG cartoon but here’s the kicker: the voices where actually done by the late, great original voice of the Looney Tunes himself, Mel Blanc! Turns out that he originally recorded the skit in the early 1950s for some kids’ album; the filmmakers cleaned up the audio, rendered stars Daffy Duck and Elmer Fudd, and the end result is pretty darn awesome. Seeing Daffy in 3D was actually kind of weird (they even rendered his feathers), but in a very cool way. Daffy’s Rhapsody brought back the feel of vintage Looney Tunes in a way that modern attempts done from scratch just haven’t been able to capture, and I’d almost say Journey 2 was worth the price of admission alone for its inclusion.

Actually, no, it’s not, as 3D movie ticket prices are astronomical, but it’s certainly worth sneaking into before seeing another movie you’re more interested in that’s starting at about the same time, and they leaving when it’s over.

But that’s not taking anything away from Journey 2: The Mysterious Island itself…it’s a charming and enjoyable experience, albeit a very simple and brain-dead one. The cast is good, and visuals great, and the action is a blast. It’s an incredibly solid family film; nothing more, nothing less. And it’s a good career move for Dwayne Johnson…hopefully the new G.I. Joe movie he has coming out in June of this year will continue the trend.