(Long Island, N. Y.) Judge Dredd, England’s most popular comic book hero, got his start in the pages of 2000AD Magazine way back in the 1970’s. Taking place in a post-apocalyptic America, the Judge Dredd comic concerns the last remnants of humanity who have holed up a giant walled metropolis known as Mega City One. Containing 800 million residents, unemployment and crime run rampant in Mega City One, and to combat the social chaos, a new breed of lawman is created: the Judges.

Patrolling Mega City One on their Lawmaster motorcycles, the Judges are heavily armed and are Judge, Jury, and Executioner all rolled into one, able to dispense on-the-spot criminal sentencing on perpetrators, up to and including death. The most feared and respected of these Judges is Dredd, a stoic, tough-as-nails veteran whose mission is life is to bring law and justice to the masses…. and if he has to curtail a few personal freedoms along the way, well, that’s okay by him.

Judge Dredd has been a successful cult comic for decades thanks to its striking view of the possible future of humanity, outlandish black comedy, and biting social commentary. In 1995, Hollywood tried their first attempt at adapting the comic to the silver screen with Sylvester Stallone in the lead role, and the results are still the butt of many a joke by Dredd fans and casual viewers alike. While the film got many things right, it got just as many wrong, including committing the ultimate sacrilege among fans: Dredd removed his helmet for most of the movie. NOTE: Dredd NEVER removes helmet! How could he be a credible metaphor for the facelessness of the justice system if he’s constantly mugging for the camera like Sly did?

A critical and commercial flop, the Judge Dredd movie faded into the classification of “so bad its good” and stayed there. Certainly, fans never expected their favorite lawman to venture out of the funny pages and into cinemas again. 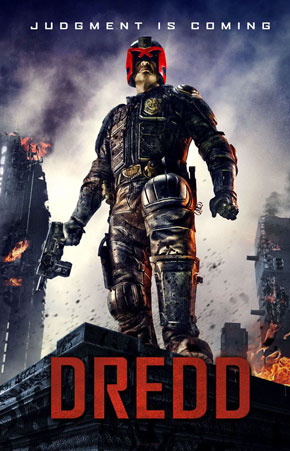 Well, surprise, surprise. It’s 2012 and I’m reviewing Dredd (or, if you feel like shelling out an extra $20 or so, “Dredd 3D”). A British/South African co-production directed by Pete Travis, written by Alex Garland, and starring Karl Urban (Star Trek, Lord of the Rings) as the eponymous Mega City Judge, and wow, does this film ever wash the taste of Stallone’s cinematic misstep out of my mouth. It’s not a remake of the 1995 flick…it’s a new, unrelated adaptation of the comic. The plot concerns Dredd taking a rookie Judge, Cassandra Anderson, out on a “make her or break her” training run, and the two find themselves responding to a homicide in a massive city block-sized building run by a vicious drug boss known as Ma-Ma (Lena Headey), who’s peddling a massively addictive narcotic known as “Slo-Mo,” which causes the user to experience time at a fraction of its normal passing.

Mirroring the plot of awesome Indonesian action movie The Raid, Dredd and Anderson become trapped in the building and have to fight their way through armies of baddies in their attempt to bring Ma-Ma to justice. But despite the aforementioned plot similarities with The Raid, Dredd’s pacing and sci-fi elements make enough of a difference that I didn’t really find myself comparing the two much, thankfully.

Despite some obvious budget constraints, this movie pretty much kicked unholy amounts of booty. Karl Urban was perfect as Dredd…scowling, raspy-voiced, and uncompromising, he IS the law! If you’re ever read the comic, you’ll be happy to know that he NEVER does anything that was un-Dredd-like, like crying, smiling, or (gasp!) kissing a yucky girl.

He also never removes the helmet. Well, actually, that’s a small lie…he DOES have one shot in the movie where he’s not wearing the helmet. It’s his big “suit-up” scene in the beginning, but he’s completely in shadow so you don’t even get a hint of his face. Once the helmet goes on, it stays on and never comes off. The helmet and Lawgiver pistol are spot-on to the comic, and the slightly re-designed uniform is awesome.

Yeah, it was weird seeing Dredd driving around in a city that looked pretty much like a modern-day metropolis (as opposed to a futuristic mass of gleaming metallic towers and highways), especially after watching Stallone’s Dredd flick, which at least had the look of Mega City One right for the most part, albeit molded 100% from CG. In Dredd, they clearly filmed in a actual city, but at least they peppered the area with a bunch of huge CG buildings to make it look more like the Mega City One from the comics.

Visually, the 1995 Judge Dredd movie had a lot going for it; despite the astonishing amount of cheese, the film had some fantastic production design which really brought Mega City One and The Cursed Earth to life from the comics in a very breathtaking and believable way. In addition, make-up and practical effects work on characters such as the Angel Gang and the ABC Warrior Robot were benchmark achievements in the genre. Heck, Stallone was even pretty solid as the character of Dredd…but then the helmet comes off, the cheese oozes in, and the instant death that is Rob Schneider is unleashed, and the movie just goes off the rails and never recovers. But visually, at least, the 1995 version is pretty hot.

In this respect, Dredd 3D doesn’t quite stack up against Stallone’s flick…part of the obvious budget constraints I was talking about. No robots, no aliens, no flying cars, no sprawling, crowded metropolises…nothing like that. The Stallone film had the money ($90 million in 1995 dollars vs. Dredd’s $45 mil in 2012 dollars) to at least give Mega City One the sense of scale and futuristic tech that this movie couldn’t, unfortunately. However, Dredd did a lot with its tiny budget…despite obviously rolling back the timeline to a more modern-day looking society populated with vehicles that you could look out of your window right now and see, it otherwise never looked or felt cheap. If they had tried to do something on the level of the Stallone flick on their budget Dredd probably would have looked like a Syfy Channel movie of the week.

Still, the tech was where it counts. The lawgiver handguns still shoot varied ammo types by voice command (standard, full-auto, incendiary, high-ex, stun, flares, etc.) and the judges still ride around in their cool motorcycles with machine guns and stuff mounted on them.

The 3D was actually pretty effective, especially during the fancy-shmancy “Slo-Mo” scenes. Those were actually beautiful, even when it was a shot of someone’s head getting blown open by Dredd with the guy’s teeth flying out and everything. It wasn’t just extreme slow motion; they also applied filters to the film to make the colors really pop during these scenes, giving it a surreal look. A really interesting, unique visual effect, and one that actually figured into the plot of the movie; Slo-Mo wasn’t just for show.

The violence was high and the acting top-notch, especially for an action flick- Olivia Thirlby, the actress playing Judge Anderson is good, and Lena Headey was very solid as the bad gal; she quite isually striking, with her matted hair and facial scarring. The pace is a tad slower in parts than I was expecting, but that’s not really a bad thing. Also, Dredd’s gun runs out of ammo way too fast, but that might just be because he kills so damn many people with it.

Oh, I WAS angry that there was no “Walter the Wobot” cameo. But otherwise, this is the Judge Dredd movie I’ve been waiting for since I was a kid. It’s fun and very loyal to the comic without going overboard on the outlandish black humor (which worked in the comic but would have seemed silly in live-action), and it’s about 1,000,000x better than the Stallone mess in most respects. And while it’s not currently breaking box office records here in the States, it’s not too late! If you’re in the market for a well-made, fun, violent sci-fi/action movie with an interesting plot device, I’d highly recommend you check it out. Besides, I’d love a sequel with a bigger budget and Judge Death, please, so go out and support Dredd!