(Long Island, N. Y.) Kick-Ass 2 is basically more Kick-Ass but less of the irony that defined the original film, with its real-world take on the whole superhero business. In other words, while entertaining on a base level, it’s also basically become what it first set out to parody.

The first Kick-Ass, released in 2010 and directed by the awesome Matthew Vaughn (X-Men: First Class), was based on a “mature readers” comic book created by writer Mark Millar and artist John Romita, Jr. To make the movie he wanted, Vaughn achieved independent backing, which enabled him to thumb his nose at the Hollywood bigwigs and do pretty much whatever the hell he wanted.

Kick-Ass was the heart-warming story of average geek Dave Lizewski (Aaron Johnson), who one day decides to don a goofy green wetsuit and fight crime just like the superheroes in comic books. Dubbing himself “Kick-Ass” but possessing no equivalent abilities that such a nom de plume would suggest, he is

soon left battered and broken by thugs after attempting to stop a robbery.

But, lucky for Kick-Ass the extensive nerve damage and the plates and screws now holding him together create a hero far more capable of taking a beating, and once he’s discharged from the hospital, he goes right back into crime fighting.

Filmed defending a beating victim from a gang attack (’cause you know kids love filming cool stuff with their smart phones), Kick-Ass ends up a YouTube sensation and attracts the attention of a real crime fighting duo: Big Daddy (Nicolas Cage), a cross between Batman and The Punisher, and his daughter, Hit-Girl (Chloë Grace Moretz), an 11 year-old kid who swears like a sailor and brutally slices and dices bad guys without remorse. Together, they enter into conflict with Mafia kingpin Frank D’Amico (Mark Strong) and his son Chris (Christopher Mintz-Plasse), blood is spilt, things blow up, the bad guys are beaten, etc, etc, etc. 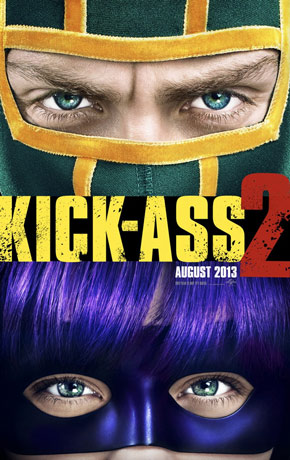 Kick-Ass 2 picks up with Kick-Ass being trained by Hit-Girl to be a better crime fighter, while she attempts to give up the game and lead the life of a normal teenage girl (at the behest of her guardian Marcus after the death of Big Daddy in the previous movie). Meanwhile, Chris D’Amico, whose father perished at the hands of Kick-Ass and his bazooka in their last encounter, uses his inheritance to become a super villain, calling himself…um…well, “The M-Fer.” Only, that’s not the whole name. It’s a bad word. I can’t type it here or I’ll get fired. But I’m sure you get it, right?

Anyway, Kick-Ass’ exploits have inspired the city, and soon there’s costumed vigilantes everywhere. Kick-Ass joins a team of heroes called “Justice Forever,” led by Colonel Stars and Stripes (Jim Carrey). Meanwhile, The M-Fer hires a team of super villains to back him up, and starts doing his best to make Kick-Ass pay for his father’s death. Meanwhile, Hit-Girl, who is honestly the only real capable fighter in the entire movie, is trying her hardest to fit in with the popular girls in high school…and failing miserably. Will she become Hit-Girl again and save Kick-Ass from certain death at the hands of The M-Fer and his gang, the Toxic Mega-C…um, well…it’s another bad word.

It rhymes with “runts.” You do the math.

Overall, the first Kick-Ass was a pretty fun movie, especially when you take into consideration the writing/directing skills of Matthew Vaughn; whereas the characters of the comic

book were rather loathsome and unlikable (even the good guys), Vaughn did what he could to humanize them and, in the case of Hit-Girl, tone down some of the REALLY objectionable aspects of her character for the film adaptation. Oh, you didn’t think she could be more offensive (or awesome)? Well, for example, Vaughn thankfully omitted her

habit of doing cocaine before battle, which I think REALLY would have sent people over the deep end. No, there was still some glaring issues regarding the characters of Kick-Ass and how invested the film got you in their plights, bit overall it was a solid and fun movie.

However, the sequel, written and directed this time by Jeff Wadlow (Matthew Vaughn co-produced), while still fun in many respects, seems to fall a bit short of the mark set by the first movie. Wadlow seems unwilling to put the effort into it to either make the characters semi-relatable or wholeheartedly embrace the parody of superhero films like his predecessor did. Thus, you get a movie that basically almost becomes what the first installment set out to make fun of. It’s a shame, because the cast is as solid as before and the actions scenes are just as hard-hitting, gory, and intense.

Aaron Johnson, with his awkward delivery, was really good, although something seemed to be missing from his performance this time around; he seemed slightly less intense for whatever reason. But once again the scene-stealer, of course, is Chloë Grace Moretz’s Hit-Girl. Yes, she’s a good actress, but it’s her bravery in taking such a messed-up role that really makes her stand out. After shocking audiences with the brash and foul-mouthed Hit-Girl when she was

just 12, she returns to do it again as a teenager, whereas most actresses her are more worried about starring in the latest crappy Twilight rip-off film. She owns this movie, plain and simple.

Oh, and Christopher Mintz-Plasse? He’s okay, but man, if he wasn’t typecast as a nerd before (and he was), this movie seals the deal forever. I just couldn’t take him seriously as a villain. Not for a second.

Kick-Ass 2, just like the original, hits a speed bump and slows way down in the middle, throwing off the pace rather significantly (it does recover for the ending, however). And, despite being a major part of the marketing, Jim Carrey‘s role is basically one step up from a glorified cameo; it’s that brief.

Also, some of the humor is hit or miss, and at times even far too tasteless for even someone as twisted as myself; an attempted sexual assault is actually played for laughs (the perp couldn’t “perform”), which is just gross. Yes, I know that, in the comic Kick-Ass 2 is based on, the rape actually takes place (that’s one reason out of many that I won’t be reading it), so at least the director had the good sense to reign in that scene, but I think the movie would have been better served if he had just removed it altogether.

Otherwise, if you liked the first Kick-Ass, there’s (almost) no reason why you wouldn’t like Kick-Ass 2. It’s certainly not for everyone, however, but if you dig your action bloody and tasteless (who doesn’t?), you should dig it.