(Long Island, N.Y.) Kick-Ass, a hyper-violent new action/comedy based on a Marvel comic book, is causing some degree of controversy. That controversy is mostly centered around the 11-year old superhero “Hit-Girl” who cusses and kills bad guys left and right with an assortment of guns and bladed weapons. Personally, I enjoyed the character, but I’m sick. Seriously, though, I enjoyed Hit-Girl in much the same way that I enjoy anything that crosses lines in an attempt to be different from the norm. But also, in the back of my mind, I wondered how her parents could let their kid

portray such a risqué character (obviously they’re either wonderful or horrible people). And deep down, I can understand why people might be bent out of shape… heck, even film critic god Roger Ebert himself called the idea of Hit-Girl “morally reprehensible,” and went on to denounce Kick-Ass for its supposed effect on the kids that will inevitably view it.

Now, I’m going to take the obvious route here and point out that Kick-Ass is an R-rated movie; it’s made for adults, NOT children. Of course, what does that rating really mean? Kids, with or without parental consent, will get into the theater one way or another. For example, a friend of mine reported seeing a row of 5 year-olds(!!!) at the showing he attended. Um, hello? Child Protective Services?

But does the fact that kids will manage to watch Kick-Ass in any way invalidate it’s existence? Alcohol isn’t for children either, but High School kids hold keg parties every weekend. Does that make alcohol “morally reprehensible”? What about cigarettes? Porn? Firearms? Spray Paint? My point is, calling a movie (or anything else) aimed at grown-ups to task for its detrimental effects on those too young to legally consume it is a tad much. Personally, I find it more disturbing that people are upset over Hit-Girl’s potty mouth and not the amount of blood she spills, not to mention a rather explicit sex scene between 2 other underage characters at one point. As per the norm in America, sex and violence is fine as long as you don’t drop the F-Bomb. 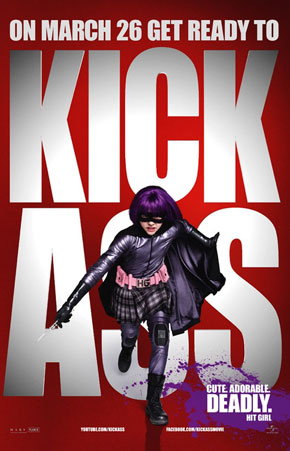 Kick-Ass, directed by Matthew Vaughn, has an interesting development history, which began before the first issue of the comic it’s based on had even hit newsstands. Intrigued by the gritty and (somewhat) realistic take of youths donning costumes and fighting crime in a world where such activities are normally confined to comic books and TV, Vaughn got in touch with the creators of the graphic novel (Mark Millar and John Romita, Jr.) and worked out a movie deal. Approaching major studios for financing, Vaughn was told to cut down the violence, make the characters older, and so on…all things he refused to do. He eventually found independent backing, which enabled him to thumb his nose at the Hollywood big-wigs and do pretty much whatever he wanted. And boy, did he ever.

Our film involves Dave Lizewski (Aaron Johnson), an average (if geeky) teenager who, inspired by comic books, dubs himself “Kick-Ass” and dons a green wetsuit to become a superhero. Of course, he has no idea what he’s doing and is soon beaten, stabbed, and run over by a car. Believe it or not, this misfortune is actually a stroke of luck- between the extensive nerve damage and the plates and screws now holding him together, Dave emerges from the hospital far hardier and more capable of withstanding a beating. His enthusiasm undeterred, he throws himself back into his “duties” and soon becomes an overnight sensation when kids film him single-handedly defending someone from a gang and uploads it to YouTube.

Kick-Ass soon attracts the attention of the brutal crime fighting duo of Big Daddy (Nicolas Cage) and his daughter, Hit-Girl (Chloë Grace Moretz), who see potential in the clumsy yet passionate Kick-Ass. Unfortunately, he also attracts the attention of Mafia kingpin Frank D’Amico (Mark Strong) an his son Chris (McLovin himself, Christopher Mintz-Plasse, who has succeeded in forever typecasting himself as a nerd). They mistake Kick-Ass for the masked vigilante responsible for thwarting their recent schemes when it was actually Big Daddy, who has a long-standing vendetta against D’Amico. D’Amico’s son Chris,

eager to prove himself to his

father, hatches a plan to draw Kick-Ass out by posing as a fellow superhero, “Red Mist.” Soon Big Daddy and Hit-Girl are also drawn in by Red Mist’s deceit, which leads to a bloody and final confrontation between the heroes and the mob.

Kick-Ass is a fun entry into the swelling comic book-based movie field, effectively serving as both a unique take on superhero films and an effective satire of the genre itself. The cast is collectively very good- British actor Aaron Johnson, with his flawless American accent and intense, awkward delivery, especially stood out. Nic Cage was a lot of fun as Big Daddy, seemingly channeling the spirit of William Shatner whenever in costume, while assuming a far goofier demeanor the rest of the time. But the scene-stealer, of course, is Chloë Grace Moretz’s Hit-Girl. It’s not because she’s a good actress (she is); it’s because you don’t normally see movies where masked 11 year-old girls look into the camera and growl insults that make the collective jaw of the audience drop to the popcorn-stained carpet of the theater in shock. Oh, and then she proceeds to slice a room of thugs into piles of quivering, bloody sushi- that’s an attention-getter as well. It’s nothing that Arnold Schwarzenegger hasn’t done better when he was making action flicks, but we’re talking about a CHILD, here. Geez.

In addition of getting solid performances out of his actors, Matthew Vaughn has put together a excellent film on a technical level. The editing of the fight scenes is about as good as it gets- tight editing, camera work and choreography ensure you see and feel every visceral blow landed in each fight. The pacing, aside from one exception covered below, is fast, and the production design is inspired and true to the comic- in addition to the costumes and weapons looking authentic, a nice touch includes a character’s origin scene rendered using cell-shaded computer graphics, giving the appearance of a 3D comic book come to life.

However, there are problems with Kick-Ass. Minor is the fact that it slows down mid-way and starts to drag a bit. It eventually regains its composure and the pace picks up, but that speed bump is exactly what the otherwise fast-paced movie didn’t need. But the bigger problem lies with the characters: despite being a fairly likable bunch (reportedly more so than they were in the comic), they’re not fleshed out in any way, and as a result, it’s hard to be moved when the big emotional scenes come up…and they do. Although it started out rather lightheartedly, Kick-Ass took a decidedly dark turn halfway through and when tragedy struck, I felt myself oddly disconnected. Now, I understand that this is primarily an action/comedy and not some overwrought drama, but if you’re going to inject the film with dramatic elements in an attempt to draw in the audience, you darn well better give them a reason to care. Kick-Ass doesn’t do really bother to do this. Occasionally you’re reminded that the characters are human beings, but make no mistake; all this movie is really about are laughs and cool characters slaughtering the bad guys in flashy, over-the-top ways. Which, when just taken on it’s own, can be a good thing as long as you don’t expect anything more from it.

So, while not without its faults, Kick-Ass is a fine example of a film made outside the restrictive Hollywood studio system and the risks/departures from the norm it can take as a result. If you’re in any way a fan of superhero or action movies, not to mention the idea of breaking the homogenized, focus-tested stranglehold major studios have over film development, be sure to support it. And if you take your little children to see it thinking “Oh, how cute- superheroes! This’ll tide little Jimmy and Mandy over until the next Spiderman movie,” please beat yourself over the head with

a brick. Kick-Ass is rated R for a reason, people!