(Long Island, N.Y.) Man, Lawless is BRUTAL. Brutal, I say! Oh, and it’s a great movie, too. Read on, brethren. Directed by John Hillcoat and based on Matt Bondurant’s 2008 novel “The Wettest County in the World” (what a terrible title) about his grandfather and great uncles in Prohibition-era Virginia, Lawless (a much better title) tells the tale of the Bondurant brothers – Forrest (Tom Hardy), Howard (Jason Clarke) and Jack (Shia LaBeouf) – and their backwoods liquor bootlegging business.

At first things are running smoothly, with local law enforcement turning a blind eye in exchange for a few cases of the good stuff. But things start to get ugly when corrupt cops from the Big City show up to get a piece of the pie as well, led by Special Agent Charlie Rakes (Guy Pearce). Real ugly, and soon the hills are flowing with blood instead of moonshine, and anyone and everyone is fair game for a bullet, knife, or bucket of hot tar. Justice was harsh in Prohibition-era rural America, and Lawless pulls no punches whatsoever; as I said, it’s a brutal movie.

Beautifully filmed in sets locales that scream authentic Prohibition era, Lawless included countless little touches that serve to envelop you in the sights and sounds of backwoods Virginia. Don’t let the “Based On A True Story” quote at the beginning of the film fool you; while Lawless is based on real characters, the majority (if not all) of the narrative is completely fictionalized. But that doesn’t stop the film from being a gripping, absorbing crime drama with fleshed-out, humanized characters that are brought to life with some high-caliber acting. Even being aware of the spectacular ensemble cast going into my screening, Lawless’ quality truly surprised me.

I don’t want to give anything away, but the reason Lawless manages to build and sustain a nonstop mounting level of tension throughout its running time is because it’s the kind of movie where anything can happen to anyone at any time. I can’t really say any more than that, as I don’t want to spoil anything, but you know how in 99 percent of movies you know that nothing overtly bad will happen to the leads? I mean, they’re the leads, right? Can’t have a movie without them, right? Not so in Lawless; everyone is fair game, and with that fact set firmly in place comes all that beautiful tension I was talking about. There’s something frightening yet exhilarating when every character in a film is fair game that all the CG in the world can’t compare to. 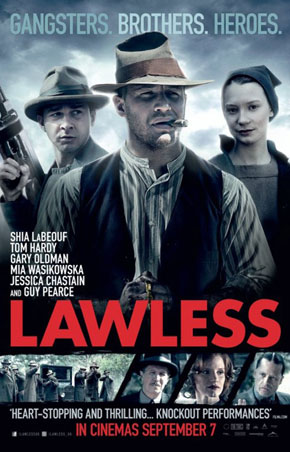 Tom Hardy (I still can’t believe this guy was the skinny little Captain Picard clone in Star Trek: Nemesis) continues his climb to stardom (or is he already there?) with his performance as Forrest Bondurant. Once again confirming his status of melting into the roles he takes, the hulking Hardy manages a quite credible Southern accident (when he actually speaks, that is…most of his communication comes in grunts, moans, and grumbles) and playing the part equally split between quiet and pensive and explosively violent. Yet, despite all that, he still manages to be endearing in a way…the hallmark of a great actor.

Still, there’s this one ongoing plot point about Forrest Bondurant that, while I won’t spoil here, does get to be a little silly as the film goes on. I’ll leave it to you to figure it out, but I feel Lawless would have been better served not going where it goes with his character.

Shia LaBeouf is Shia LaBeouf. Fan of him or not, Lawless will not change your mind about him either way, as once again he plays a dork whose primary facial expression is one of confusion, with a secondary of fear when he’s getting beaten up any one of a hundred times over the course of the film. His character of Jack Bondurant is basically a spineless punching bag, and when he FINALLY has his big “manning up” scene, you almost don’t care, because the scene wouldn’t have even been needed (and people close to him wouldn’t have died) if he hadn’t been such a wussy-boy beforehand.

Gary Oldman is great in the 14 seconds he’s actually in the film. He plays a legendary gangster in a nice return to violent form after years of playing nice-guy roles, but…well, he’s in the film for 14 seconds, so he doesn’t really get to do much with it.

And I’ve GOT to talk about Guy Pearce. His Special Agent Charlie Rakes is equal parts prissy, sophisticated, disturbing, and crazy, and it’s one of the more memorable screen villains, both in appearance and in action, that I’ve seen in a while. With his fancy, pastel double-breasted suits to his Alfalfa-like, inch-wide part down the middle of his hair, his suave mannerisms belay the true psychopath lying in wait just beneath the surface. Truly a bad guy that you desperately want to die, as my friend Don, who watched Lawless with me, can attest to.

Jessica Chastain, who plays the attractive city-gal character of Maggie Beauford and love interest for Forrest, seemed out of place both in her desire to work in the Bondurant’s disgusting backwoods diner and, well, as a love interest for Hardy’s frumpy character. I mean, why him? But it’s a credit to her that she nonetheless makes the role work, playing Maggie as a strong, caring, independent character with a murky past she’s obviously trying to leave behind in order to make a new life…even one where she’s serving roadkill to toothless old drunks on a daily basis. Man, what could she be running from that’s worse than that…??

The remainder of the main cast – Dane DeHaan, Mia Wasikowska, and Jason Clarke – all excel in their roles as well, although Wasikowska’s character falling for LaBeouf is about as unbelievable as any of the other supermodel characters that fall for him in his other films, but at least Wasikowska is a good enough actress that she makes her fall for him a gradual thing, with actual resistance shown early on, so I guess it was easier to buy in this case. Sorta.

So, if you want to watch a wonderfully-directed, visually arresting, period piece about an especially tumultuous and nasty era in American history with some fantastic acting, Lawless comes with my highest recommendation. It’s not perfect (especially the ending), but neither was the time period nor the characters it depicts. Go check it out.