(Long Island, N.Y.) Well, well, well…if it isn’t the most unoriginal action movie ever made: Lockout. Written and produced by Luc Besson, who has brought us great films such as Taken and From Paris With Love, Lockout falls directly into line with Besson’s established formula: take a cool, deadly, charismatic leading man, add him into a simple, derivative, one-note plot, set the blender to “kill,” and stand back and watch the carnage.

It’s funny how little details can separate two films that, on paper, can be almost identical in theme and/or content. Now, last week, I gave the awesome Indonesian flick The Raid four, count ’em, FOUR stars, within the context of being the best pure action movie made in the last 10-20 years. Did it have a plot? Not really. Originality? Nope. Dialogue? Barely. Insane, heart-pounding, unique, masterfully choreographed action scenes that blast you in the face, one after another after another, until you almost can’t take it anymore? YOU BETCHA.

And yet, when you put it side-by-side with another movie that takes the same simplistic approach – Lockout – their similarities only serve to
free it exam pdf highlight the weaknesses of Besson’s film and underscore the strengths of The Raid. How? Well, I’ll get to that shortly. First, let’s tackle Lockout’s plot.

Prepare for cliché overload in 3…2…1…Snow (Guy Pearce? In an action movie? Huh?) plays a government agent (cliché #1) convicted of a crime which he did not commit (cliché #2) who is offered a pardon (cliché #3) if he rescues the President’s daughter (cliché #4) from a prison (cliché #5), which happens to be in outer space (I guess that’s not really a cliché) which has been taken over by its prisoners after a riot (cliché #6). Snow is tough (cliché #7), insubordinate (cliché #8), spouts non-stop one-liners (cliché #9), and plays by his own rules (cliché #10). Those in charge loathe the idea of sending him in (cliché #11), but are forced to since he’s the only man available who can get the job done (cliché #12). 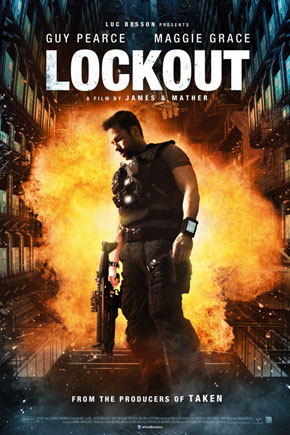 Whew! Yeah, I warned you…Lockout leaves no stone unturned when it comes to recycling plot elements from just about every action movie ever made. But otherwise, Lockout is a very straightforward tale; all the characters are simply caricatures you’ve seen billions of times before, the plot contains no twists, turns, or deviations from its narrative, and the action scenes, while solid, never fully manage to impress, partly due to the Lockout’s somewhat low-budget feel.

Not that’s there’s anything wrong about being low-budget, but when you overextend yourself beyond what your budget can accurately portray, you run the risk of heading into SyFy Original Movie territory, which is a place you don’t wanna be. Lockout actually mostly manages to look pretty impressive from a visual standpoint despite its $20 million budget, but it’s uneven; sometimes it also looks cheap. Meanwhile The Raid, which cost much less to produce, nonetheless looks consistently better because it’s low budget was dispersed into a production more realistic when considering the money available. Instead of an expensive CG space station, we have a run-down building, and the money is spent in ways more advantageous to the production.

Likewise, where Lockout and The Raid both are driven by simple plots, The Raid also works better in this respect due to the fact that the limited storyline enabled the filmmakers to run wild with inventive fight and stunt scenes without having to give each one context; sometimes working with less enables you to do more. Lockout, however, seems hampered by its simplicity. It delivers good action and fight scenes, but nothing that ever tries to push the envelope. Perhaps it’s because it’s not a film made with a cast of crazy Indonesians willing to throw themselves headfirst into walls and off of balconies, or perhaps it’s because Lockout is such a slave to the genre conventions that it’s following, but it’s bare-bones plot comes across as sluggish and predictable without the exhilarating combat delivered with nonstop intensity by The Raid. Instead, the gaps between fights just come across as filler instead of something driving a good narrative. Hell, I don’t think The Raid had ANY gaps.

Don’t get me wrong…Lockout is a good, solid action movie with a neat science fiction twist. But it’s so weighed down with following every action cliché ever conceived that it never really becomes engaging, because you feel like you’re watching every old-school action film ever made rolled up into a package that brings nothing new to the table. Plus, it had the misfortune of being reviewed by me mere days after watching The Raid, and ANY action movie would suffer in comparison in that case.