Addiction — The One Area Where Celebrities are Just Like Us

Now, don’t get me wrong. I don’t think any recovering 21-year-old addict should be drinking nor doing any other type of drugs, period. But, is it that big of a deal that she had a sip of champagne on New Year’s, recovering alcoholic or not? 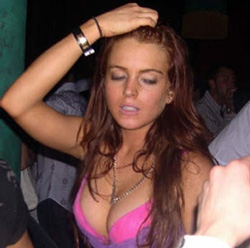 According to the reports, she controlled herself and only drank from the bottle because it was passed to her on a dance floor. She then proceeded to call her sponsor and not fall completely off the wagon and into alcohol oblivion.

So, my question is whether what Lindsay did was really worth all the hoopla. And while I think that any recovering alcoholic should stay miles away from beer, wine, liquor, champagne, and maybe even cough syrup, that is not necessarily very realistic.

I think when I go on a diet I should stay away from all the cookies and sweets I crave. But, if I go to a birthday party, someone hands me a slice of cake, and I take a bite that doesn’t necessarily mean I’m going to lose it and eat the whole cake. Do you see the difference?

Lindsay shouldn’t have taken that drink because she knows she is vulnerable. She shouldn’t have even been at the party around alcohol. But, that is very limiting and a decision to stay home on New Year’s for a young celebrity is certainly a difficult one to make.

A Little Self Control

In fact, we are all presented with difficult decisions every single day. And, we frequently make the wrong choices.

Even if I am on a diet, I don’t avoid birthday parties or restaurants that serve dessert. I just manage to control myself most of the time and only slip up here and there.

The point is that you have to learn self-control. Avoiding every situation where you might be around your weakness, alcohol for Lindsay and anything with sugar for me, then you won’t live a very fulfilling life. The point of recovery and therapy is to find a way to control your urges, get over your addiction, and live a normal life.

But, how normal is having every misstep printed in every national magazine, on thousands of websites, and broadcast on TV? It must be completely mortifying.

I admit I have snuck sweets when on a diet as if hiding my consumption from others would make it less real. If my failure to control myself was printed in my local paper I would feel ashamed and embarrassed.

So, my point is, how do celebrities manage to get over addictions and other personal problems they may have if they are never allowed even on misstep without being crucified in the press? We all learn from our mistakes, and even grow in spite of them.

I think we should give celebrities a little more space and a lot more understanding. Sure, they are richer, prettier, and thinner than the rest of us. But, they have absolutely no privacy and are judged at the drop of the hat. So, the next time you start thinking how Lindsay is an out of control celebrity with a drinking problem think of all the things you could call yourself.

I might be a perpetually dieting closet chocolate eater, but that doesn’t mean I’m not trying.

As the New Year gets off to a start let’s think about giving everyone a little more breathing room and a break or too, even the celebrities who seem to be asking for our criticism. It’s a great exercise in self-control to stop criticizing everyone else and try and focus on what they are doing right. Who knows, I might give myself a break or two and start eating my chocolate in front of anyone who cares to see!