Guests enjoyed a spectacular performance by the renowned group Disco Unlimited that added to a once in a lifetime experience. Disco Unlimited performs classic dance hits with a modern twist.

The Crescent Beach Club is famous for its romantic views of the beach and water of the Long Island Sound. Patrons dined on a lavish 5 star buffet including seafood, sushi, & top meat stations as well as tasting delicious cocktails overflowing with premium top shelf liquor all evening long.

The event was hosted by Celebrity Radio Host Stephanie O of LINEWS Radio and Mikki May. I had the pleasure of sitting down with Stepanie Ovadia and talking about her radio show, her law practice and her eight children, which she admits is her greatest accomplishment. 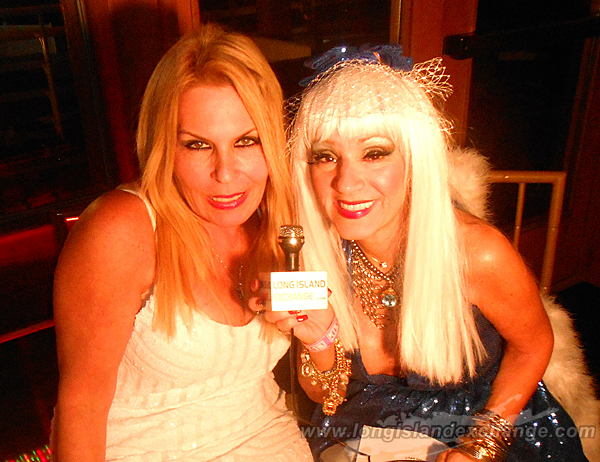 Introduce yourself to the camera.

Stephanie: Hi I am Stephanie and yes I am a mother of 8 and this is my greatest accomplishment.

You have been an attorney for so many years, how did you parlay being an attorney into a show biz career?

Stephanie: I don’t know. You know it was one of those things I always liked. A friend of mine said to me, that when we were in 10th grade I said “One day I am going to be an attorney and I am going to have a show” and so I became an attorney and it took a lot of years to work on having a radio show and so hopefully turning that into something more. I just enjoy it. I am a people person and I enjoy it but my greatest claim is my children and their accomplishments.

That leads me to my next question. A mother of eight You have been an attorney for many years. How difficult is it to juggle a career and have these eight kids, what advice can you give us. It’s hard to raise one child let alone eight. Can you give my audience some advice on how to achieve success and to do both juggle a career and raise kids. How can we all do it with just maybe raising one or two?

Stephanie: You know I really don’t know how I did it. Looking back part of it was being younger, I had more energy. I never thought about the future. Like everything was daily. I lived daily. There was just a a daily routine. I had my children. I had a routine with them and I never sweated the small stuff. I really didn’t because my son had asthma so we had big issues and I tried to just deal with big issues and not smaller issues. It somehow worked for me. I don’t know if today, I am a little older if I could manage that many kids and all their issues. I think its the opposite for me as my kids have gotten older they have become more self sufficient and they really have less problems. I know people say bigger children, bigger problems but I really haven’t found that situation.

So the key really is to not look so far into the future just do it on a daily basis and get through that day and that’s how you can juggle both a career and raising children at the same time.

Stephanie: I was also good at having children. I never was the kind of person who had any problems. I was very fortunate. I got pregnant, I gave birth, I went right back to work.

You really didn’t think about it. It was something that just happened.

You didn’t start out being an entertainment lawyer. Tell my audience what kind of law did you practice?

Stephanie: I was a personal injury attorney and I still am. I still love personal injury work. The problem is and I know this is going to sound somewhat crazy but its going to make sense. Years ago there was a lot more personal injury cases because cars weren’t built the same. There weren’t the same safety standards in our every day living. Now that safety standards are at a much higher level there really isn’t as much personal injury work. It really started phasing out and not only that but also because things are built so much better even when there is an accident the injuries are not as great anymore because the cars are made better and there are other factors involved. Even with machinery that’s made so much better today that you don’t have the same injuries as you had. So really personal injury is phasing itself out and that’s how I kind of picked up other types of law.

Entertainment law, is that more difficult?

Yes, I know all about it.

Stephanie: There are a lot of entertainers. There is only a very small percentage that make money that hire a lawyer and that is the bottom line.

You use to be Lindsey Lohan’s lawyer or are you still her lawyer?

Stephanie: You know what I really can’t talk about clients but I love that family, I love Dina.

Absolutely, who doesn’t love that family!

Stephanie: You know what they are a wonderful, wonderful family and that’s about all I can say. They are very good people.

You were named Top 2014 Women in Business by the Queens Courier. Tell my audience what this award means to you.

Stephanie: Well you know what I was very humbled by that award. That award really meant a lot to me because I kind of do my thing. I go about my business. I raise my kids. I have tried to be the best mom I can and really nobody even tells me that your kids are always like, “I hate my mom” They don’t always say that but you know every mom has gone through that when your kids say “I hate you” you know teenagers but you very rarely get acknowledged for things you have done because I just go about my business so when somebody acknowledges me it tells me wow, you did a good job. I am really humbled by it. I was so excited I couldn’t even believe it.

It’s wonderful. You must be so thrilled.

Stephanie: I was, I really was and you know I am really thrilled everyday because I am fortunate. Like I said. My second oldest son is a doctor already. He is actually a plastic surgeon.

Tell my audience about the radio show.

Stephanie: Well I was fortunate enough. Actually it’s kind of a funny story because I started out in New Jersey on College Radio. Rutgers University was looking for an older person who wanted a radio show. Some one came to me and said “You know what you always wanted a radio show so why don’t you give it a shot.” I said “All right” and I started on college radio. Very funny and when a friend of mine heard about my show and he said “You know what, why don’t you start a new talk radio here on 103.9 FM.” He said “Why don’t you come and talk to the people and see if they would be interested in your show” and I was very fortunate that they loved the show. They picked it up here in Long Island and now we are moving it to the Florida market.

Stephanie: It’s getting bigger and bigger. The audience is just huge now.

Tell my audience about the topics you discuss on your show. It’s a lot of gossip and entertainment?

Stephanie: I am fortunate that a dear friend of mine, Adrian Schwartz who is the head of Life & Style and In Touch Magazine co-host with me every week. So we actually sit and we figure out really cool topics and we make them into shows and we love it.

I love it. I love the idea. I want you to tell my audience where we can go to find out more information. What is your website?

Stephanie: Go to http://www.stephanieoshow.com or friend me on facebook/Stephanie Ovadia or go to 103.9 and read about me on their site and thank you for interviewing me. I love you. You are amazing!

Stephanie Ovadia is the original Octo-Mom, as well as a practicing entertainment attorney and radio show host. She is the mother of eight children, ranging from seven to twenty-five years of age. She has represented numerous celebrities including those from reality shows such as Mob Wives, The Real Housewives of New York, The Real Housewives of New Jersey and Jerseylicious. Now, this Long Island mother/attorney is hosting a celebrity gossip and reality show recap radio show with a new set of rules and a slew of celebrity guest appearances. The Stephanie O Show is the best source for the latest celebrity news and gossip, featuring exclusives from Star Magazine & Radar Online.

I also had a chance to chat with two very dynamic vocalists from Disco Unlimited who were entertaining that night at the Crescent Beach Club. 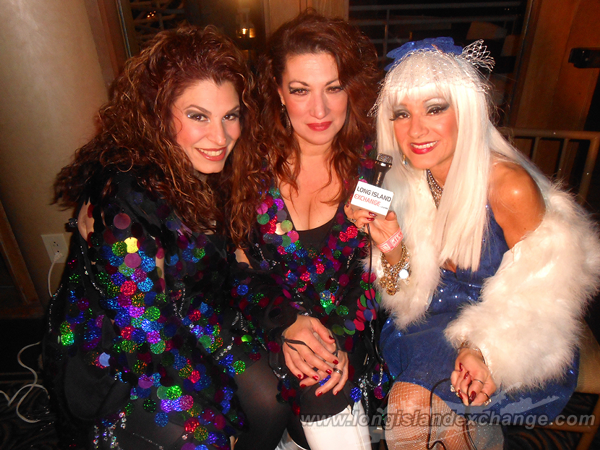 Introduce yourself to the camera

Sista Soul: And I am Sista Soul from Disco Unlimited.

Tell my audience about the whole idea of disco. How did you get into this?

Sista Sou: Well it’s funny enough. It all got started with church. A friend of ours asked us all to sing and do modern Christian music at a church and we have all known each other for thirty years but we never sang and performed together and we started doing that music and we said “Oh my gosh this is something” and then I said to Annie, “What’s your favorite music to sing” and she said, Disco.

Sista Soul: So we gave it a whirl. It started on Halloween, so the costumes were there the first time we played and they have been there ever since. People love it.

You guys are fabulous! Tell my audience what is your favorite song?

Boogie Sista: We have so many favorites.

Sista Soul: “Everybody get up and Boogie.” We like a lot of classic stuff from Studio 54 like “Romeo and Juliet,” “Souvenirs” some of the things you don’t hear all the time. They really are a lot of fun for us to perform. I am a huge Donna Summer fan.

Boogie Sista: We do “Dancing Queen.” We do a whole bunch of Alba, we just have so much fun We just enjoy ourselves.

Sista Soul: The website is http://discounlimitedband.com and you can also friend us on facebook/DiscoUnlimited or you can just Google “Disco Unlimited” and you will find us everywhere.

Disco Unlimited instantly transports the scene to a place when Saturday nights meant white suits, platform shoes and excellent dance moves; and dance you will to top disco hits like “Dancing Queen” and “Disco Inferno.” This band has fast become the hottest disco show and dance group on the East Coast. Close your eyes and you will truly believe you are listening to the original artists. Disco Unlimited is a group of six unique and experienced musicians that had everyone on the dance floor.