(Long Island, N.Y.) In the Bible, fire and brimstone are known as “the torments suffered by sinners in hell”. But here on Long Island, Brimstone is anything but demonic. In fact, he one of the sweetest guys I ever had the pleasure interviewing. Don’t let the photo or the character fool you. Although professional wrestler, Will Kaye (AKA Brimstone) is a destroyer in the ring, he’s a smart, well-spoken family man with his heart in the right place. His larger-than-life character is about to hit the comic books.

Kaye, a father and Long Island resident was big on the music scene many years ago and has deep roots in the wrestling community. About his 11-year history as a wrestler: “I’m the person who originally launched the NYWC (New York Wrestling Connection), and created Critical Mass Pro Wrestling, the professional wrestling school which produced a few WWE stars, and many up and comers,” says Kaye. He currently works with PWR Wrestling (www.pwrwrestling.com) utilizing his years of knowledge. ” I’m also a member of the Unified Wrestling Federation run by my trainer and mentor, “The Original” Gino Carusso. 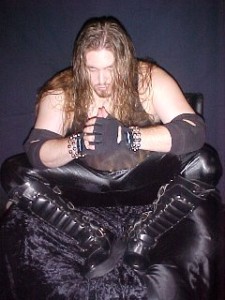 Will Kaye (AKA Brimstone)

This is quite an accomplishment considering the dropout rate for pro wrestling in about 90 percent. “You have a 10 percentile that actually continues with it and makes it through training,” says Kaye. He says many people who get involved with wrestling think it’s all the glam and the glitz and they don’t realize it’s a lot of hard work and effort that goes into the training. But Kaye stuck with it and transformed into the character, Brimstone. “I’m the kind of character now who is an unstoppable force in the ring where I’ll go in and I’ll clean house.” A destroyer–with a heart. Kaye confesses he often likes to give the young guys in the ring their chance to shine. But make no bones about it (or “break” no bones, for that matter) he’s a dominant force in the ring not to be meddled with.

Interesting career choice considering as a kid growing up in Uniondale, he was never into sports. He dabbled in hockey,”I really didn’t play very well, but I was the bruiser,” jokes Kaye.”I spent most of the time in the penalty box.” If someone in your family is a wrestling fan, Kaye often does shows and autograph signings around Long Island. The big news these days: There’s a comic book in the works based on his wrestling character entitled, ” The Borderhounds.” www.borderhounds.com

As for being a professional wrestler, Kaye says he’s just a regular guy. “I do the same thing that everybody else does, except for ten-15 minutes in a match–I’m Brimstone. It’s a wonderful thing. I absolutely love the sport and the business.”