(Long Island, N. Y.) Don’t let the goofy name fool you…Looper is a pretty hard-edged sci-fi/action film with a brain. Looper opens like any self-respecting science fiction movie does: with a voice-over courtesy of the main character explaining the world you’re about to enter to the audience. Judge Dredd did it last week when I watched Dredd 3D, and this week Joseph “Joe” Simmons (played by Joseph Gordon-Levitt) did it at the beginning of Looper. It’s standard sci-fi procedure, folks…everyone does it.

So, what’s a Looper, you ask? Well, in 30 years time travel is invented and subsequently outlawed, because we all know the naughty shenanigans that time travel can be used for, right? Unfortunately for criminals, super-duper forensic techniques have also been invented, ensuring that it’s impossible for criminals to get rid of a dead body. Therefore, a black market has been developed for stashing those bodies; using illegal time travel machines, the mob of the future transports unwanted dudes 30 years into the past, where contracted hit-men known as “Loopers” are waiting with a big ol’ blunderbuss (kinda like a shotgun for dummies). The Looper blows away the victim, collects the silver bars strapped to their back as payment, and disposes of the corpse.

Oh, there’s a twist; eventually, every Looper knows that he’ll be killing their future counterpart for a big final payment of gold. It’s just part of the job, but while they then are officially “retired” and can live the good life, they have to do so knowing that in 30 years they’ll be staring down the same barrel of a gun that they killed themselves with back in the day. Wacky concept, huh?

Joe Simmons (Gordon-Levitt) is one such Looper. He spends his days doing the future mob’s dirty work, and his nights taking drugs and partying. That is, until one day he finds himself face-to-face with his future counterpart, played by Bruce Willis. However, there’s a catch; whereas the victims of a Looper generally arrive wearing a hood, Old Joe arrives unmasked, giving Young Joe pause. That pause is all Old Joe needs to make good his escape, which lands Young Joe in hot water with his bosses, including Abe (Jeff Daniels), a mobster from the future sent back to manage the Loopers. 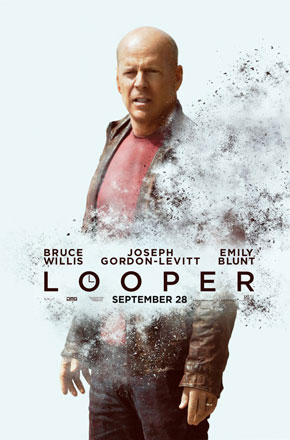 This leads both Young and Old Joe on a chase that involves a Terminator-like plot development where Old Joe is determined to make changes to the past to affect the future…changes that Young Joe is worried might actually lead to disaster. So, it’s a battle between the mob and the two Joes, and one fact established early on in the film provides little comfort- that the future is not set, and anything and everything can be changed.

Looper is a very good movie with some amazing performances…heck, it’s the most alive I’ve seen Bruce Willis in a role in years. I’ve always thought that, in the right roles, Willis is an amazingly gifted actor, and Looper proves that he still has that spark…again, in the right roles. Hopefully he’ll keep picking them.

Joseph Gordon-Levitt continues to carve out his niche in Hollywood, proving himself to be a talented, versatile actor who can seemingly tackle almost any type of role. He does a pretty uncanny Willis impersonation…in fact, I was more impressed by his merits as a thespian in Looper than I was by the technology on display that helped to complete his transformation. It appeared that a combination of facial expressions, make-up effects, and CGI were used to make him more closely resemble a young Bruce Willis, but the end result (as far as I’m concerned, anyway) were…weird. Most of the time, Gordon-Levitt looked more like a transsexual Robert De Niro. Whatever they did, however, at least they got Willis’s nose dead-on; the rest, not so much. Thankfully, Joseph Gordon-Levitt’s performance picks up the slack in that department.

I thought the farm sequence, where Young Joe encounters a single mother (Emily Blunt) and her telekinetic son Cid (Pierce Gagnon), kinda slowed the pace down to a crawl for a bit, but overall, a very enjoyable, well-written and intelligent movie with some impressive action sequences.

Oh, and the young Seth/old Seth scene early on was chilling. If you watch it, you’ll know what I mean.