(Long Island, N. Y.) I didn’t like Machete, director Robert Rodriguez‘s 2007 attempt to expand a fake trailer he made for the violent exploitation spoof “Grindhouse” into a full-length feature film. Now I like its new sequel, Machete Kills, even less.

In theory, Machete should have been awesome. In reality, you can make anything look awesome for 2 minutes, but when you need to pad it out to 90, then the seams start to show, so to speak. Danny Trejo, a re-occurring actor in Rodriguez’s flicks for ages, stars in his first lead as the eponymous Machete, reprising his role from the Grindhouse trailer. He’s plays an ex-Federale who is the most dangerous Mexican on the planet.

Or rather, he would be, if Trejo wasn’t a few months shy of hitting 70 years of age; I thought the guy could barely hobble across the screen in the first movie, but he’s really coming across as broken-down…not the best guy to craft an action movie around, if you ask me. If Rodriguez had made Machete maybe 15 or 20 years ago, Trejo would have been awesome in it, but now it’s just sad. If the proposed third film ever gets made (which probably won’t happen after this past weekend’s lackluster take at the box office), the poor guy’ll need a walker.

The plot of Machete Kills, in theory, should be hilarious fun; Machete is recruited by U.S. President Rathcock (Carlos Estévez, AKA Charlie Sheen acting under his real birth name) to stop a madman from launching a deadly missile aimed at Washington, D.C. in a move that mirrors the James Bond flick Moonraker. The story opens up from there to involve a worldwide criminal organization (again, similar to SPECTRE from the Bond movies) headed up by the evil Luther Voz (Mel Gibson, clearly spoofing his own recent image as a nutty bully). 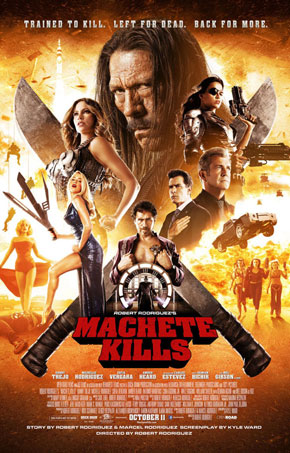 There’s also an eclectic backing cast comprised from a “who’s who” of celebrities, including Michelle Rodriguez, Sofía Vergara, Amber Heard, Lady Gaga, Antonio Banderas, Cuba Gooding Jr., Jessica Alba…the list goes on and on and on. I guess, on paper, Machete Kills should be good for a laugh, right? Or at least a bout of morbid curiosity?

Nope. Much like the original, Robert Rodriguez found a way to stretch out a gag far beyond its breaking point, taking crazy B-movie action and somehow making it BORING. It doesn’t help that the effects are sub-SyFy movie-level quality, which is strange because Rodriguez is the one man in Hollywood that can make a great-looking film for something like $20, but here the CG blood and explosions look like something out of a Playstation One game. Was this done on purpose to add to the spoof? I don’t know, but I just remember the good old days when every Robert Rodriguez movie WASN’T a spoof; I mean, the man has made some impressive films in the past, but now all he’s interested in doing is winking at the camera.

Now I’m going to cut and paste a small paragraph from my review of the original Machete, because I said this stuff well enough the first time around:

“Too many corny, talky scenes, too much bad digital gore (especially where physical gore effects would have worked better- that’s just lazy), and barely any good laughs brought this movie down several notches for me. Plus, most of the action scenes seemed poorly staged and filmed, which is an oddity in a Robert Rodriguez movie.”

Ah, thank you, Chris. But there are some good gags and some decent action/gore scenes to be had in Machete Kills, and in some ways Rodriguez hits the mark slightly more often than he did in the lackluster first entry in the series; but it’s just not enough, and the overall experience of this movie is one of pain and boredom sprinkled with a laugh here and there.

Machete Kills is bad, and you probably should skip it; but hey, maybe you might find a few fun nuggets to enjoy if you look hard enough. Probably not, however.