I really don’t remember much about Men in Black II, honestly. I remember it being bad, of course, and I remember that Lara Flynn Boyle (no relation) was a fairly lame villain, and that Johnny Knoxville was her insanely annoying sidekick, and I remember the film just trying WAY too hard to live up the original and failing miserably. I also remember the rampant product placement everywhere, to the point where a PlayStation Dual Shock controller was used to pilot a flying car (Columbia Pictures distributes the MIB movies, and is owned by – you guessed it – Sony, the maker of the PlayStation). Other than that, I remember very little, other than the general bad taste I get in my mouth whenever I think of Men in Black II, which is rarely.

The Men in Black series started in 1997 and is based on some comic book that I’ve never heard of. The original movie was actually pretty great…the premise is that mankind has been clandestinely dealing with extraterrestrials for decades through a super-secret agency called the Men in Black, who monitor their comings and goings on Earth, acting as ambassadors and, when needed, law enforcement. In the original film, grumpy veteran MIB operative Agent K (Tommy Lee Jones) recruits streetwise smartass Agent J (Will Smith) into the organization, and together the mismatched pair (is there ever any other kind in these movies?) save the planet from a giant monster cockroach. Men in Black 2 saw the duo back together again, but that movie just sucked, so can we FINALLY get to Men in Black 3, please? 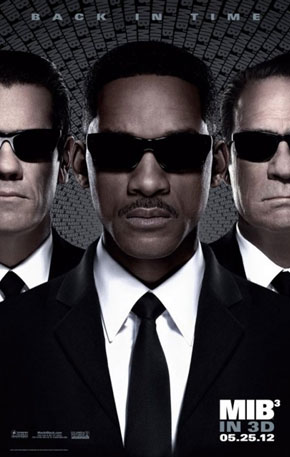 Men in Black III involves a bad guy named Boris (Jemaine Clement), incarcerated and de-armed by Agent K 40 years prior, who escapes from a lunar penal colony with revenge on his mind. He travels back in time to murder K to change the present, ala The Terminator, and is successful. But for some reason, Agent J still remembers K despite now existing in a timeline where the two never met…of course, if the two never met, and K recruited J into MIB, how is J still an MIB agent? Wha…? All I know is that it has something to do with chocolate milk. Seriously.

Also, in this alternate timeline, K’s death in the past has resulted in an alien invasion in the present, so everything’s pretty much gone kaplooey. Naturally, it’s up to Agent J to set things right.

So, J travels back in time to stop K’s murder and, in doing so, runs into a 29 year-old K (played by Josh Brolin), who is just as brusque in his youth although not nearly as curmudgeonly, which gives J insight into his partner that he never had before, allowing the two to finally bond (well, sort of). The two agents team-up against the duo of past and future Boris, with the future of the planet (not to mention K’s future, or lack thereof) hanging in the balance.

Men in Black III was fun. It didn’t try too hard, unlike the previous movie. It had a fun, emotional dynamic that, honestly, not even the first movie had. I’m not saying it’s a better film than the original…it’s not. But none of the MIB movies really dealt with J and K’s relationship and the feelings behind it to this degree, which is something the series needed by this point. The slapstick and wiseass comedy was toned down, which I also found to be welcome, because Will Smith playing Will Smith for the billionth time would have been just too much. Smith still plays J as an obnoxious loudmouth, don’t get me wrong, but his performance is tempered with maturity and experience now, as if Smith realized that, after 15 years as an MIB agent, J wouldn’t still be acting like a total buffoon.

Tommy Lee Jones is Tommy Lee Jones, playing K as his usual crusty, cranky old guy character. He really isn’t in the movie that much, because he gets murdered early on, but when he’s around, you get what you expect. But the scene-stealer here is Josh Brolin as Jones’ younger counterpart. Thankfully, MIB3 doesn’t just rely on the gimmick that Brolin can do a dead-on Jones impersonation strictly for laughs…instead, Brolin takes the part and makes it his own, injecting K with a bit of warmth and humanity. Honestly, if they make a MIB4, I’d be okay with them finding a way to replace Jones with Brolin.

And oh, yes…Boris. Possibly the best villain of the series, Jemaine Clement plays Boris (don’t call him Boris the Animal) both as well-spoken and articulate (with a smooth British accent), and yet bad-ass and horrifying at the same time. Also noteworthy is his character design…while basically humanoid, Boris is eventually revealed as a hideous mass assembly of appendages; a brilliant idea that harkens back to the design of Stan Winston’s Predator in terms of sheer originality. MIB creature designer Ken Baker is truly a master of his craft.

Of course, MIB3 isn’t perfect…several aspects contribute to it falling short of the fantastic original film. First off are some of the inconsistencies when it comes to the changes to the time stream and their affects on J, which I already covered. Next is this odd sub-plot where modern K is even more grumpy and cranky than usual (bordering on outright depression, actually), which is attributed to some unexplained event in his past that is supposed to have been really, really horrible. Eventually, this event is revealed, and while it’s not pleasant, it’s certainly nothing that would forevermore disfigure your personality the way it happened to K. And without spoiling anything, this event also changes some of the dynamics of the first movie…in a negative way, in my opinion.

But, overall, Men in Black III is fun, funny, and a fairly original and creative take on the whole MIB premise. That said, I think they’ve milked the series for pretty much everything that they can by this point…when a franchise has to resort to the whole time travel MacGuffin, you know it’s just about run out of steam. But if MIB3 is indeed the last of the series, at least it’s going out with its head held high.