(Long Island, N.Y.) I’ve always given the Mission: Impossible films (themselves based on the classic TV series) a passing glance, but I’ve never gotten too into them. I’m not sure why…what I’ve seen is pretty solid, I like action films, and series star Tom Cruise, general battiness aside, is a good actor who seems to handle action scenes fairly well. But, despite all those pluses, the series never really grabbed me…I’m not sure why.

Well, here we are at installment number four, entitled Mission: Impossible – Ghost Protocol, and the producers have finally done something that hooked me in: they hired Brad Bird to direct it. Now, you might know Mr. Bird’s from when he was working with Pixar, where he helmed an amazing animated film called The Incredibles. Man, I love that movie…and it was having that movie alone on his resume that made me interested in checking out Bird’s first attempt in directing a live-action flick. The result? It seems that he has as much talent with flesh-and-blood actors as he does with CG ones.

In Ghost Protocol, Cruise plays IMF Agent Ethan Hunt, out to save the world from terrorists bent on starting a nuclear war. However, Hunt is made the scapegoat of a botched operation and forced to “go underground” to complete the mission, completely devoid of support…aside from his fellow team, however, made up of government stooge with a secret William Brandt (Jeremy Renner), tech nerd Benji Dunn (Simon Pegg), and butt-kickin’ babe Jane Carter (Paula Patton). Together, the rag-tag band scrapes together what high-tech gadgets they can from a hidden safe house, and set out to stop the end of the world. 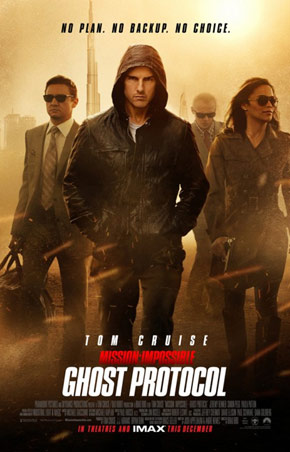 Having a good director like Brad Bird, one who has already established himself as having a great grasp of balancing character and action, is really the key to a film working or not. Yes, things blow up and crazy, way over-the-top things occur, but you’re able to suspend disbelief because the action pieces are so well-done and, for the most part, original- a chase scene in a sandstorm, a fist-fight in a weird, futuristic parking garage, and the money shot scene from the commercials where Cruise scales a tower in Dubai using Spider-Man gloves are all prime examples. Renner floating around via a wacky magnetic suit is a fun scene as well.

Having a great cast doesn’t hurt, either. Cruise continues to deliver the goods, even at the age of 49…yes, the men is 49! Aside from an obvious hair dye job, the man really seems to be defying the ravages of time, easily holding his own in the film’s many action scenes. As for his co-stars and fellow IMF Agents, no, we don’t get lots of character development or tid-bits about their past, but we do get to experience their fully-developed personalities, which in a movie like this is possibly even more important, especially when they’re as likable as they are. Frankly, as good as Cruise is, he’s practically upstaged by his cohorts, especially Pegg and Patton. Renner’s good, too.

Oh, and I have to make special note of Paula Patton…in a movie landscape densely populated with scrawny, wimpy action movie chicks that we’re supposed to buy as butt-kickers, Patton stands out as a women who’s actually believable in the role. She’s still feminine, but she’s not waifish. Girl’s got curves, and they’re all muscle. I’d like to see her go head-to-head with Gina Carano (an MMA fighter who’s starring in Steven Soderbergh’s upcoming spy flick Haywire) for the crown of toughest action movie gal. Girls like Zoe Saldana can just sit on the sideline chewing on a lettuce leaf and watch.

As for the script of Ghost Protocol, it’s a bit messy and clichéd, but honestly, you won’t care. In the end, it’s a fun, fast-paced, exciting movie and a great start for director Bird as he ventures into the realm of live-action (although I wish he’s get off his butt and finally make The Incredibles 2…I mean, come on, guy). Top marks for all involved, and highly recommended.