The Brooklyn Bridge is among of the oldest suspension bridges in the United States that stretches 5,989 feet over the East River connecting both boroughs of Manhattan and Brooklyn in New York City. The interdependence between Brooklyn and Manhattan has roots as deep as transition of both areas from agriculture to modern urban centers of industry, commerce, and residence as well.

The Brooklyn Bridge was known as the largest suspension bridge upon completion and the first steel-wire suspension bridge. There are almost 150 thousand vehicles using the Brooklyn Bridge everyday. Its distinctive design and massive proportions are as much a wonder for onlookers as its real utility. It is also difficult to imagine the enormous stresses the concept of the bridge and its construction actually caused, as one takes in today’s scene of its worth to the community. 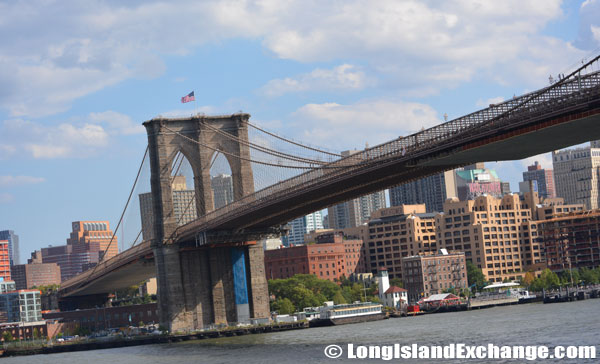 The bridge was constructed on January 3rd, 1870. It was completed thirteen years later and was first opened for use on May 24th, 1883. The Brooklyn Bridge was designed by German-born John Augustus Roebling in Trenton, New Jersey. He had earlier designed and constructed other suspension bridges, such as Roebling’s Delaware Aqueduct, the John A. Roebling Suspension Bridge, and the Waco Suspension Bridge. Roebling planned to run two elevated railroad tracks, which were to connect to elevated railroad systems in New York and Brooklyn, down the center of the bridge. On either side of the tracks, he designed four lanes – two lanes on two outer roadways – for use by carriages and horseback riders. Directly over the tracks, he also provided an elevated promenade for pedestrians and bicyclists. On that very first day on its opening, there were an approximation of 1,800 vehicles and 150,300 people crossed what was then the only land passage between Manhattan and Brooklyn.

The bridge’s main span over the East River is 1,595 feet 6 inches (486.3 m). It took almost 14 difficult years to construct the bridge and about 30 people lost their lives while making it. A rumor had been issued that a certain cause of their death is due to a contractor supplied inferior grade material in a bid to cut corners. There were other deaths because 19th century safety practices were poor and to some extent, due to rank bad luck. Though all of its controversy and tragedy that provoked before it was ready for use, the Brooklyn Bridge had still become a symbol of not only of the greatness of New York, but also of American ingenuity.

The Brooklyn Bridge was designated a National Historic Landmark by the federal government and a National Historic Civil Engineering Landmark by the American Society of Civil Engineers. In recent decades, the landmark structure has been refurbished to handle the traffic demands during its second century. But now, the bridge accommodates six lanes of automobile traffic, carries approximately 145,000 vehicles per day (AADT).

After nearly 120 years, the bridge still has the 44th longest main span among the world’s suspension bridges. The NYCDOT plans to completely rebuild all of the elevated approaches to the bridge, which city inspectors rated “structurally deficient” under the Federal Highway Administration’s (FHWA) rating system. They also plan to construct a new direct ramp to connect the westbound lanes of the bridge to the southbound FDR Drive.