Hollis Hills is an upper-middle class neighborhood within the northeast section of Queens, part of the Metropolitan area of New York City. The neighborhood is surrounded by the Grand Central Parkway to the south, Kingsbury Avenue and Richland Avenue to the north, Hollis Hills Terrace to the west and Springfield Boulevard to the east.

As of the 2000 census, there were 3,206 people residing in the area. The median income for a household in the village was $112,820. Hollis Hills has not been included in the 2010 Census, so there is no update to the population data for this community. 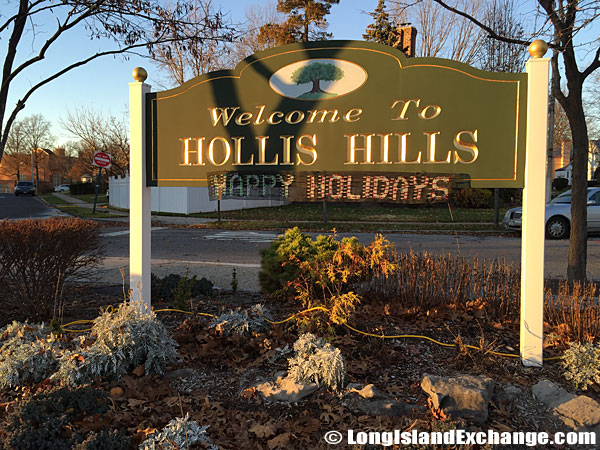 A sign welcomes visitors and residents to the neighborhood of Hollis Hills Queens. 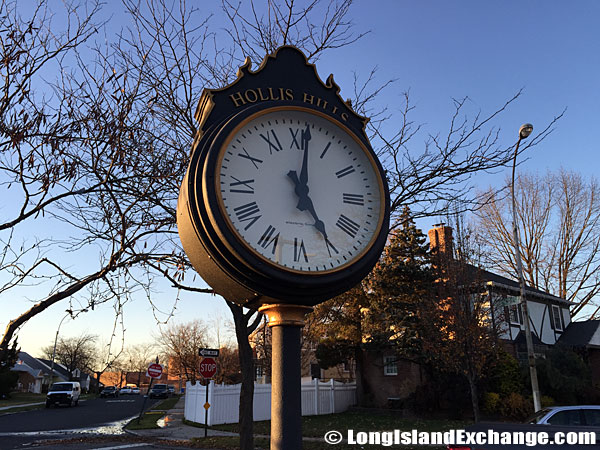 A clock with its neighborhood charm stands near the areas welcome sign. 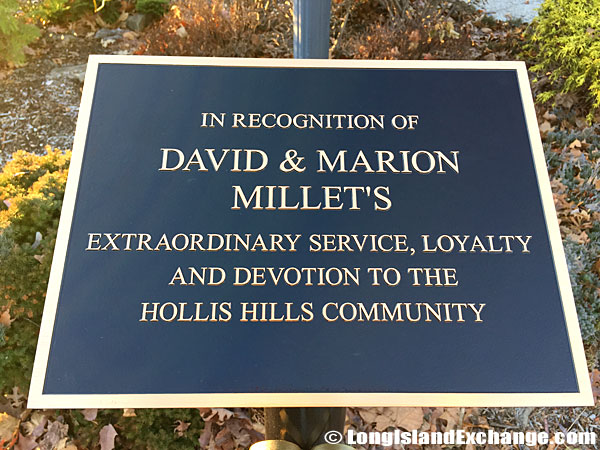 A plaque in recognition of David and Marion Millet’s for extraordinary service, loyalty and devotion to the Hollis Hills community.

Hollis Hills is physically distinguished from the neighboring areas of Holliswood and Hollis by a slight elevation above sea level, thanks to a quirk of a retreating glacier from the last Ice Age. It is close in proximity to Manhattan and can be accessed by car in about 20 minutes during non-rush hour periods.  Penn Station is 28 minutes away via the Long Island Rail Road. 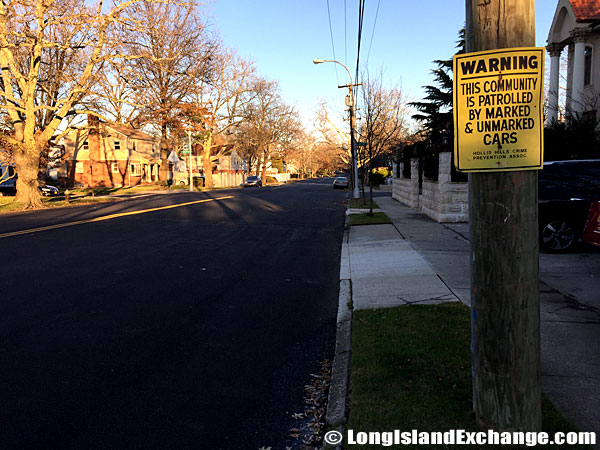 A sign warns visitors that the community of Hollis Hills is patrolled by marked and unmarked cars. 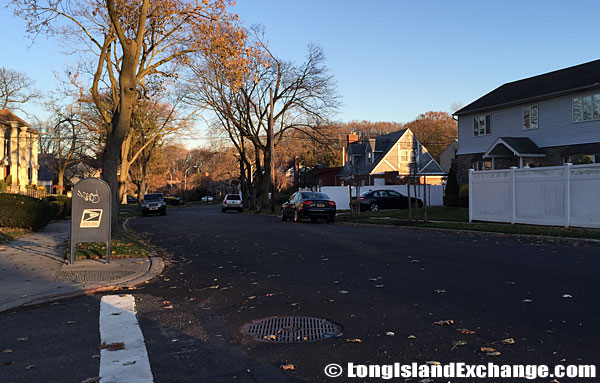 A typical side street in the neighborhood of Hollis Hills. 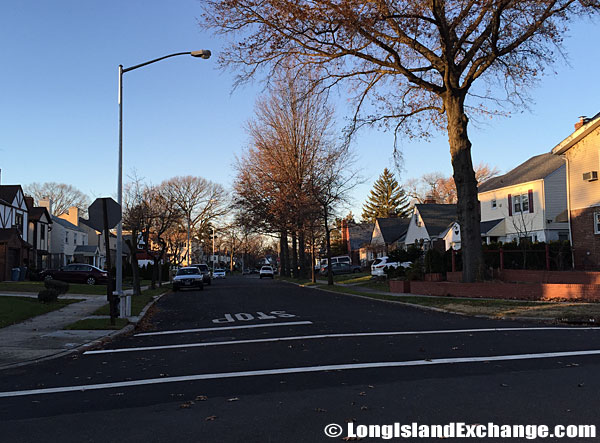 A typical side street in the neighborhood of Hollis Hills.

The original Hollis was named after a town in New Hampshire, and the newer community got its name because north of Hillside Avenue the land raises. In 1939, the Surrey Estates homes were among the first to be built in Hollis Hills. Most of the others were built after World War II. There’s a lot of children who grow up in the neighborhood whom still remain here to raise their own families. 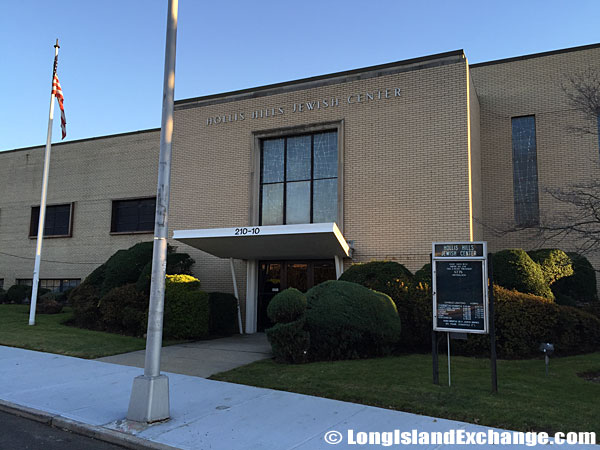 The Hollis Hills Jewish Center, serving the community since members of the faith began moving in around 1948. 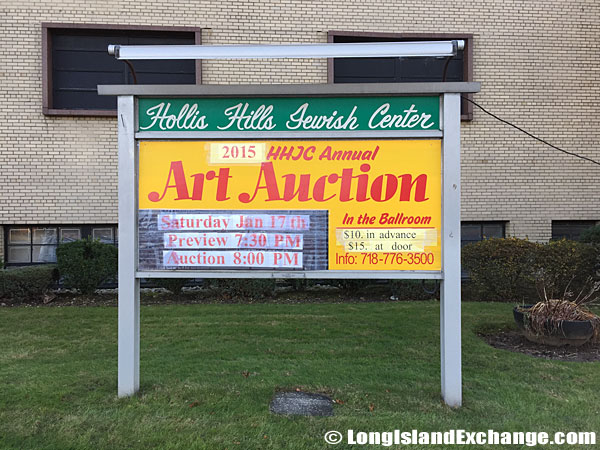 The Hollis Hills Jewish Center hosts the Goods and Service Auction, the Bazaar and the Art Auction, among other events throughout the year. 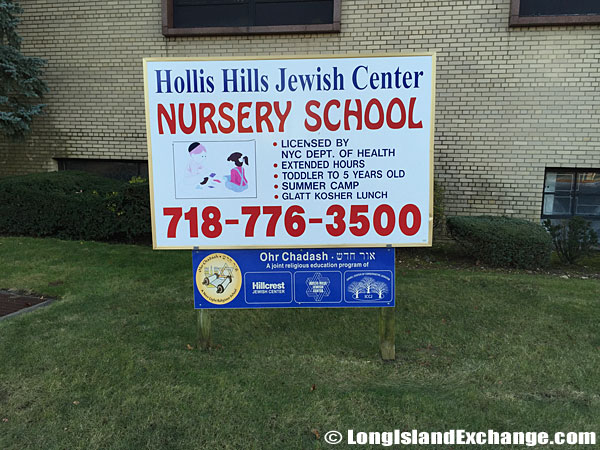 Although it is not required to be a practicing Christian or Jewish to qualify for the right to live in Hollis Hills, there are several Churches and Synagogues which can be found in the neighborhood. The Chapel of the Redeemer Lutheran Church dates back to the years of World War II, when some of the first homes in Hollis Hills were built. The American Martyrs Roman Catholic Church has conducted services for over 5 decades though its present site which dates back to 1968. The Hollis Hills Jewish Center has also served the community ever since members of the faith began moving in around 1948. 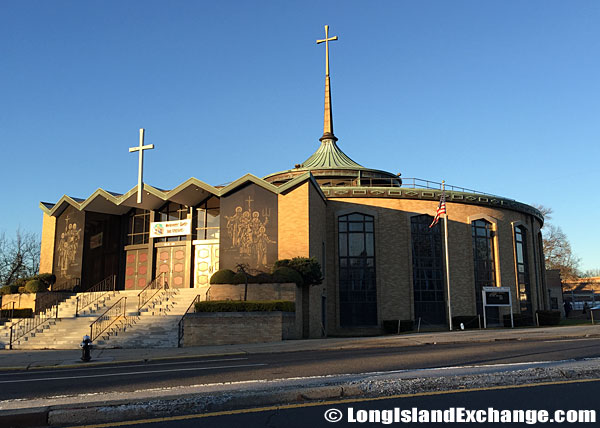 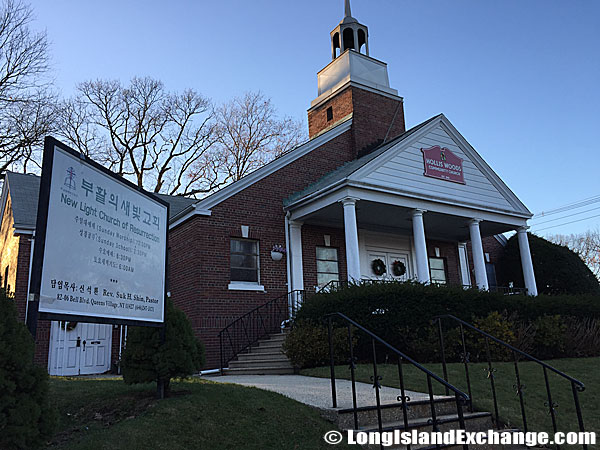 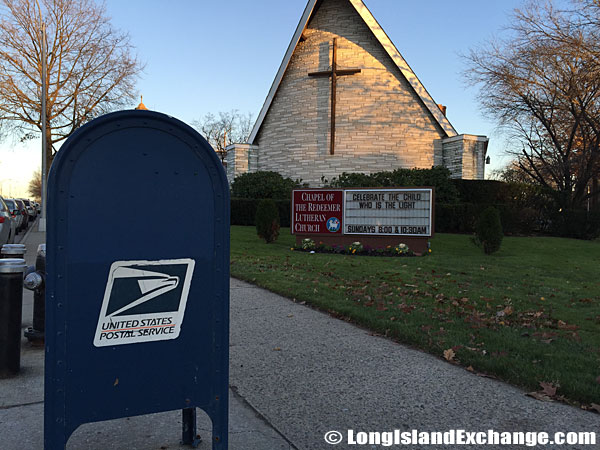 The Chapel of the Redeemer Lutheran Church.

The neighborhood is home to the Hollis Hills Civic Association which is responsible for preserving the tree dominated neighborhood landscape and goes about its conservation objectives with unvarying integrity and salutary professionalism. Hollis Hills lacks shopping centers and restaurants but many residents still prefer it that way. The only stores and restaurants within the community are in small bunches at 212th Street and Union Turnpike and farther east on the turnpike at Springfield Boulevard. It does have a public library, at Bell Boulevard and Union Turnpike. 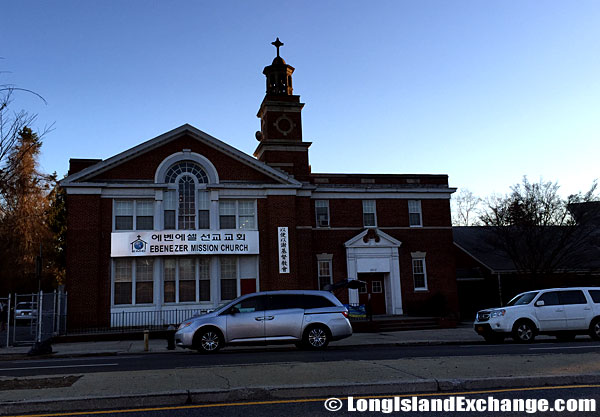 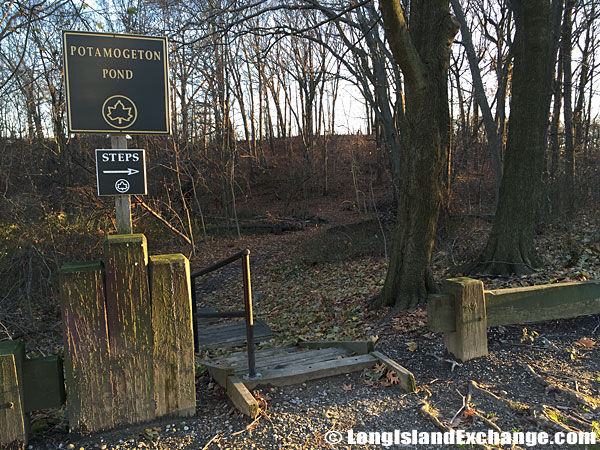 Potamogeton Pond, accessible from this staircase at 86th Avenue and 217th Street.

Education is the primary reason that many families ultimately decide on Hollis Hills for a place to live. Children can attend the Chapel of the Redeemer Lutheran School on Union Turnpike and 220th Street, which offers kindergarten through sixth grade classes and has an enrollment of 94 children. Hollis Hills also has the Roman Catholic American Martyrs School, which has 235 pupils in kindergarten through eighth grade. Two of the finest and largest parks are within the neighborhood. Alley Pond and Cunningham parks have acres and acres of forest, running and bicycling paths, indoor and outdoor tennis courts, playgrounds, ball fields, picnic areas and a nature center.