All proceeds went to ICAMI’s Global Stress Initiative and the J. Luce Foundation. Guests gathered at SPACE SIXTEEN SOHO, 311 West Broadway between 6pm and 8pm on Monday April 20th for the event.

Mitzi Perdue, wife of the late Frank Perdue, earned degrees from Harvard University and George Washington University. As a former rice grower, and syndicated columnist, television and radio host, she frequently gives inspirational talks, encouraging people (particularly young people) to be all they can be. 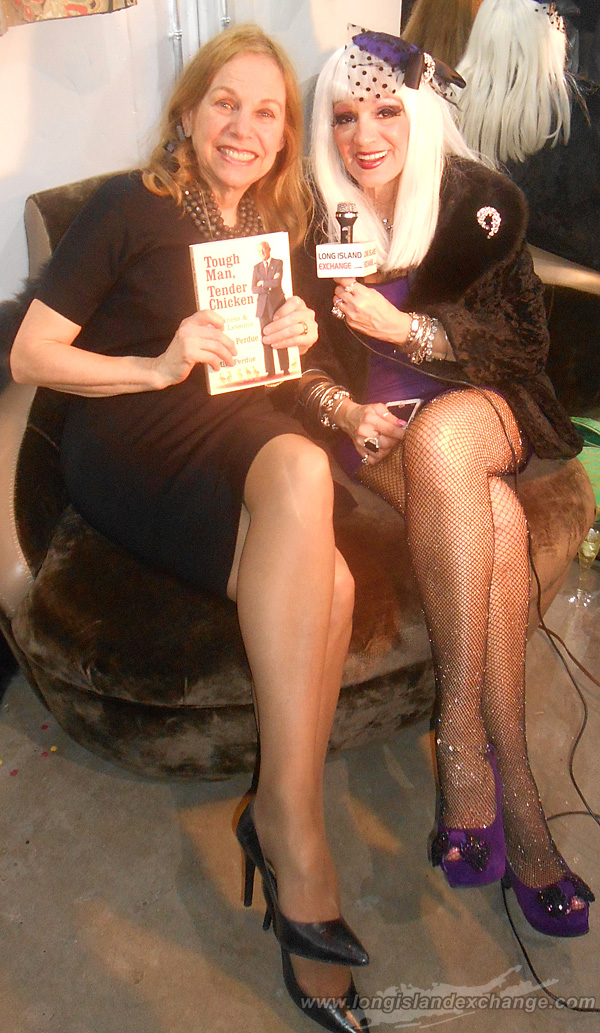 During the event we sat down and talked about her amazing life with her late husband Frank, Perdue.

Welcome back darlings, I am here with the fabulous author, Mitzi Perdue and she wrote a fascinating book about her husband Frank Perdue “Tough Man, Tender Chicken.” Tell my audience what inspired you to write this very provocative book?

Mitzi: Thank you so much. What really got me to write it was it occurred to me looking back on Frank’s life that what he really was, was a teacher. He built a company when it started with him and 2,000 people. By the time of his passing nineteen thousand people worked for Perdue Farms and how do you get that many people to work together and that well. I think that he was a teacher and I decided to write the book because I thought there was so much wisdom in how he went about growing that company.

He was a tough man wasn’t he, not with you though I bet he treated you like a princess, I am sure!

Mitzi: Well you know the funny thing is people would always tell me, “You must be a tough cookie to stand up to Frank Perdue.” But in fact he just treated me like with kid gloves. He was always kind to me. I think he had a great ability to adjust how he treated people according to who they are. I don’t have any backbone at all so we worked just great.

Mitzi: Your my kind of woman! I love you dearly!

The company is still under your name. Are you on the top of all this?

Mitzi: The family is. It’s a family owned business. Yes the family runs it.

That’s wonderful. That’s truly truly wonderful that you kept it in the family. Are you running it or do you have a son or daughter running it?

Mitzi: Jim Perdue is the one who runs it now. I think it’s five members of the fourth generation working in the company. Jim is third generation.

Mitzi: The third generation Jim Perdue and there is four of the fourth generation running it and that’s kind of exciting because how many companies go four generations.

Not that many. People somehow mess it all up. The children and the siblings they’re always fighting, no one can agree but I am happy to hear that the company still is going on in the fourth generation and it’s prosperous. It still is the best chicken out there.

Mitzi: You wouldn’t believe how hard we work to make it the best. In fact allow me to boast. We are all friends right?

Mitzi: One of the advantages of being a family owned company is that we don’t have to worry about each quarter and what the stockholders are going to say. So we were able to invest for twelve years in something that wasn’t a payoff deal until it was a payoff. We have learned how to produce chickens without antibiotics. Our chickens are antibiotic free.

Mitzi: But it took twelve years to get it there.

Mitzi: Well because the fact is anybody can grow chicken without antibiotics the only trouble is they die. So it took a lot of learning how to produce really healthy chickens without antibiotic and we did it. Yay!!!

Tell my audience what your life was like with Frank Perdue. Was it a glamorous life? I probably have to read the book to find out.

Mitzi: I am going to agree with you. It was amazingly glamorous.

I am sure. You must have got into every restaurant, every night club, was able to see every celebrity you could imagine. Am I right about that?

Mitzi: Well A your right. There is a PS to it. Frank really, really enjoyed living in his community being close to the charities he cared about. So he was a mixed person. He was very good with celebrities. He was also good with his close friends and he was a very unassuming man. It surprises people to know that a company that large, Frank Perdue would travel economy class. we would use the subways regularly.

Mitzi went on to say how much she still misses her late husband, Frank Perdue and that Johnny Carson was a good friend of his. Mitzi also revealed, “There was nobody like him, he had it all. He was a successful businessman, he had a loving family and he was close to his community so how many people have it all like that.” 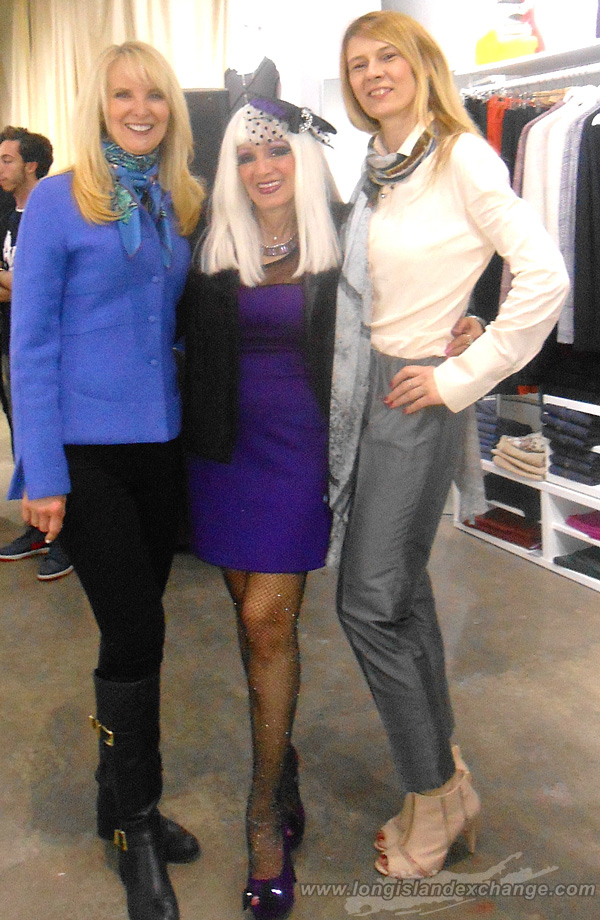 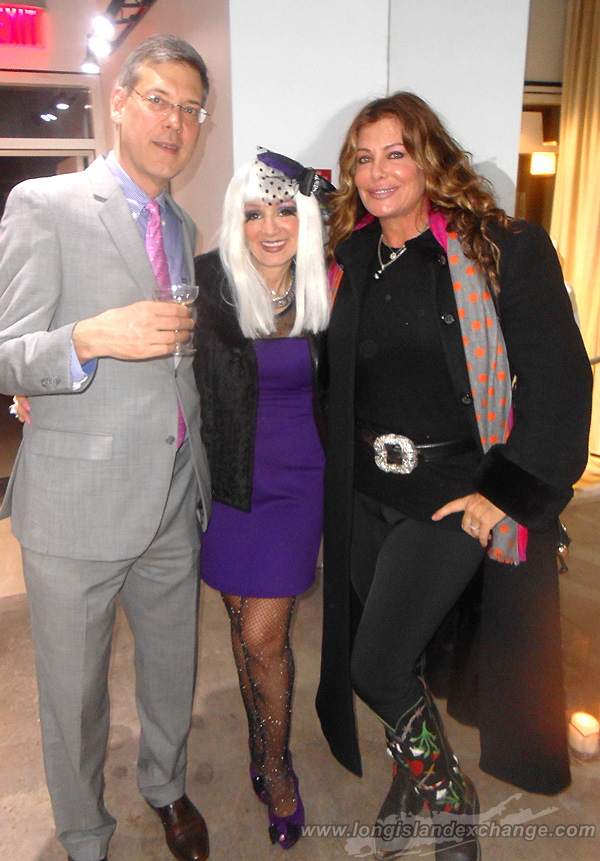 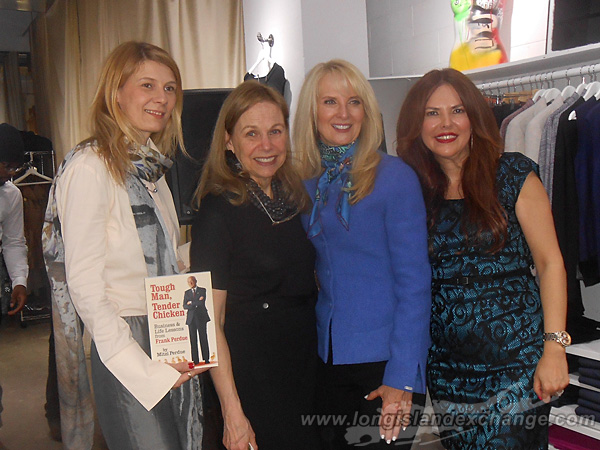 Frank Perdue was the quintessential entrepreneur, marketer, and businessman, a man whose life lessons are applicable to anyone searching for inspiration and encouragement. To write this book, Perdue’s wife Mitzi interviewed nearly 140 people, seeking to understand every aspect of the man behind the tremendously successful corporation.