(Long Island, N. Y.) There’s a great deal of sci-fi coming out as of late, and I for one couldn’t be happier. Science Fiction, in my opinion, is a lot like pizza- even when it’s bad, it’s still pretty good. Yeah, I know, that’s a pretty lame and overused analogy to use, but it still holds true.

The latest bit of sci-fi to plop down in theaters, the Tom Cruise-starring Oblivion, is a bit of throwback to slightly higher-concept 70’s-era fare…or, at least, it tries to be. High on concept but thin on actual script, Oblivion is still a fun and entertaining bit of pulp for the masses to enjoy.

Set in the year 2077 on Earth after the successful repulsion of an alien attack that nonetheless left the planet basically uninhabitable (nukes tend to do that to an ecosystem), Technician #49, AKA Jack Harper (Tom Cruise) oversees the protection of Earth’s remaining resources with his partner/lover Victoria (Andrea Riseborough) through the means of automated robotic drones that patrol the world. Said resources, including water, are being harvested by…um, harvesters, which in turn deliver the materials to an orbiting space station called Tet, where most of humanity is holed up.

Once Earth is stripped of its intrinsic goodies, Jack and Victoria are scheduled to join the other survivors on the planet Saturn’s moon of Titan, where most of humanity is holed up. However, when repairing a drone, a regular part of his daily chores, Jack stumbles across some information – including the reliability of his own memories and possibly the existence of rogue, abandoned human beings living underground – that has him questioning his mission; and those questions might result in his undoing at the hands of those he thought were on his side. 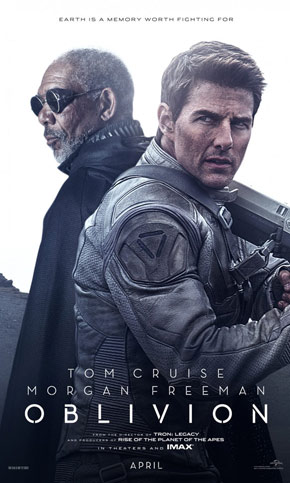 Oblivion is an odd duck (another lame and overused analogy, but I LOVE that expression); the trailers make it look like an action-packed firefight from start to end, but in reality, action is used rather sparingly. There ARE some impressive set-pieces when it comes to gunshots and explosions, don’t worry, but overall, Oblivion boasts a small cast and attempts to tell a more personal, intimate story tinged with mystery. And it does that rather well, but not altogether successfully.

First of all, Oblivion is pretty much carried by the talents of Tom Cruise, who is probably the most reliable actor in Hollywood and has been for ages, in my opinion; supposed personal idiosyncrasies, aside, he takes each and every role and makes it work, at times with astounding success. Here he channels his tough-guy action movie persona, but he plays it with equal parts quirkiness and anxiety as well, which results in a more delicate, nuanced performance. I’d comment on the other characters, but honestly, this movie is all Cruise.

For example, Morgan Freeman shows up playing Morgan Freeman, as Morgan Freeman always does…he’s his usual rather charming self, but there’s little else to be said. Andrea Riseborough plays Tom Cruise’s rather nondescript female sidekick and lover, although a twist revealed later in the movie does give a bit of depth to her.

However, the story of Oblivion is weighed down by heavy-handedness and an abundance of clichés, giving it a “been there, done that” feel at times. And while the film tries to convey a complex narrative, the result is less than the sum of its parts; it’s a movie that tries to be deep, but at the same time the established conventions it steadfastly follows robs it of that depth somewhat.

And since this is a sci-fi movie (directed by filmmaker Joseph Kosinski of Tron: Legacy fame), of course you’re asking if it’s pretty and if it has lots and lots of flashy CG effects. The answer is obvious in this day and age, of course, but I’ll nonetheless deliver it anyway- yes. It looks great, and really manages to effectively convey the ruins of the old Earth and the cutting-edge tech of the future era it’s set in. But any film with a decent budget can lay that claim these days, right?

Overall, Oblivion is a very solid action/sci-fi/mystery hybrid…one that delivers as many familiar elements as refreshingly original ones. If you’re a fan of the genre, Cruise, or both, you could do a whole lot worse (like, say, Scary Movie 5 worse) than gambling the bucks and giving Oblivion a try. Go for it.