(Long Island, N. Y.) Olympus Has Fallen follows the rather implausible premise of terrorists taking over the White House and holding the President of the United States hostage. Still, it’s a movie, and if you buy into movie logic and are capable of suspending disbelief…well, it’s STILL rather implausible. But we’ll get to that in a moment.

Gerard Butler, who consistently stars in some of the worst movies imaginable, finally ups his game by starring in an average production for once. He plays Mike Banning, a Secret Service agent and former U.S. Army Ranger who is in charge of the security detail for the President (played by Aaron Eckhart). Or rather, he was, until a silly little car accident on the way home from Camp David leaves the First Lady in a car wreck at the bottom of the drink. Banning manages to save the President himself, however, who shows his appreciation by transferring him to the Treasury Department, since having Banning around reminds him of the dearly departed wife.

Maybe he should have saved the First Lady and let the President drown…I’m sure the Vice President would have been a lot more grateful for the resultant pay hike. Anyway, while Banning is toiling away crunching numbers at the Treasury, the White House is invaded by North Korean-led terrorists headed up by Kang Yeonsak (Rick Yune), who demands that the U.S. military withdraw from Korea, but he also has more dastardly designs: he wants to destroy the U.S. by blowing all of our nukes in their silos ’cause his folks were killed by American air strikes during the Korean War when he was a kid. Seems the President and some of his associates have the codes to do so, and Yeonsak is determined to get them no matter what.

Banning, hearing of the situation, is forced to invoke the power of Steven Seagal 80’s hit Under Siege when he sneaks into the White House and, of course, ends up being the only man bad enough to save the President. Countless action movie clichés abound, the end. 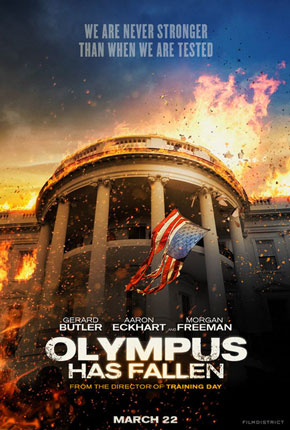 Overall, Olympus Has Fallen is a decent entry into the world of modern action flicks, which means it’s below the high-water mark set for such fare in the 1980’s, but it still manages to be entertaining on a base level. Gerard Butler is a solid actor who manages to star in terrible movies, so when he finally manages to get himself into an average film with a surprisingly good supporting cast, he can finally show off his modest talents.

Speaking of that cast, we have an impressive who’s who of actors whose careers are winding down: Aaron Eckhart, Ashley Judd, Morgan Freeman, Angela Bassett, and Cole Hauser, just to name a few. All bring their A-Game here, although some are used better than others (Judd’s role as the President’s wife amounts to little more than a glorified cameo). As usual, Rick Yune plays an evil Asian, as he does in most of his movies, which is disappointing, as he’s actually a really great actor and I feel he suffers a great deal of unfair typecasting in Hollywood.

As for the movie itself, the actual raid of the White House is pretty unbelievable, if you know anything about the extreme amount of security surrounding the President’s crib, especially in the United States-post 9/11. I really don’t think a cargo plane bristling with multiple Vulcan cannons can really get into Washington D.C.’s airspace unmolested to conduct a strafing run on the White House, let alone a small army of armed and armored terrorists who manage to easily overrun the Secret Service. As I said, it’s all rather implausible, but the film is nonetheless fun and paced well, and the action itself, while too laden with CG as most Hollywood productions are in this day and age, still packs a punch when needed.

So, Olympus Has Fallen is an okay movie, and if a quick action fix is all you’re looking for, I suppose it will scratch that itch just fine. However, if you’re looking for a REAL action movie, the big guns of 80’s nostalgia are finally set to be gloriously unleashed this week…G.I. Joe Retaliation is coming out this Thursday after a gut-wrenching, last-second nine-month delay to needlessly convert it to 3D, and I get the feeling it’s be a great deal more fun. Stay tuned for my review, kids!