LONG ISLAND, NY – Shoppers gathered with a line around the corner at Roosevelt Field Shopping Mall on Long Island to attend the The Original Soup Man Famous Delicatessen and Grill’s Grand Opening in the mall’s food court from 12 – 3 p.m. on March 21, 2015.

Actor Larry Thomas, The Soup Nazi, from the hit TV Show “Seinfeld” was on hand to sign autographs and serve the many varieties of soup to shoppers during lunch time.

I had the pleasure of interviewing Founder Seb Rametta. Mr. Rametta is founder and member of the Board of Directors of the subsidiary, The Original Soup Man, Inc. and is responsible for the executive management, focusing on strategic relationships, driving sales and distribution. He served as the Executive Vice President and a director of Soup Kitchen International from January 2005 to December 2009. 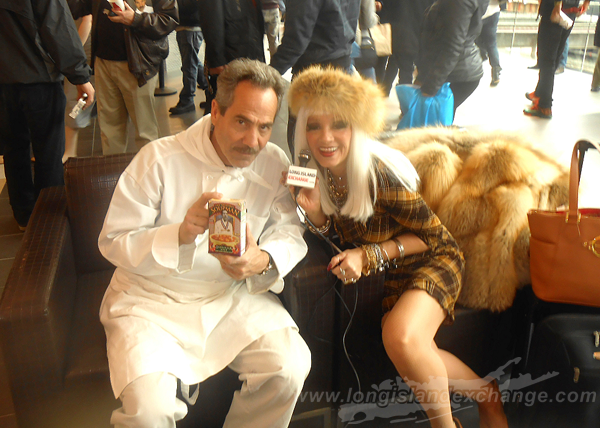 Tell us about the Orignal Soup Man Famous Delicatessen and Grill:

Reb: It’s about the ingredients, the abundance of the ingredients. We are so happy to be here at Roosevelt Field Mall with our new delicatessen grill concept. The crowds have come out.

This is amazing, the line is wrapped around the corner.

Reb: Because it’s all about the soup and the food. We deliver great food to people. They like it and they come back. It’s that comeback flavor that is created here and it is so wonderful. We are excited and I think you should try a cup.

I will. I am going to try the Lobster.

Reb: We are going to open these stores in casinos, malls and airports all around the country. I also have six of our varieties in Tetra Pak cartons. These cartons lock in the freshness and made it available on the shelf next to Campbells and Progresso on the soup aisles.

So you can actually buy the soup?

Reb: You can buy this soup in supermarkets across the country. These are new lines for us. Now we bring something new and exciting to the grocery aisles for soup because there is nothing that taste quite like our soups and we are excited about opening here in Roosevelt Field and we have new stores coming.

Reb: Because it’s about the food and Al Yeganeh started this in the 1980’s in Manhattan and he made these wonderful soups, Best of Zagat of New York.

Tell my audience where we can go to find out more information.

I also spoke to the “Soup Nazi” himself Actor Larry Thomas from “Seinfeld” who made an appearance to serve the soup to patrons at the grand opening.

Tell my audience why is this soup so spectacular?

Do you have a favorite?

Larry: I do have a favorite, New England Clam Chowder is my favorite.

Later I had the chance to chat with Co-owner Rakesh Chada who owns several franchises in Roosevelt Field Shopping Mall.

Tell my audience why you decided to open up such a brand of restaurant?

Rakesh: Soup Man was always known for the lobster bisque, a world famous soup and that inspired “Seinfeld” to do a show on him. It was the best soup in the world Zagat rated and with my current experience that we could take this brand into a second level and with the delicatessen, with the great sandwiches, we have a grill and I think this brand is ready to give Long Islanders great food at a reasonable price. 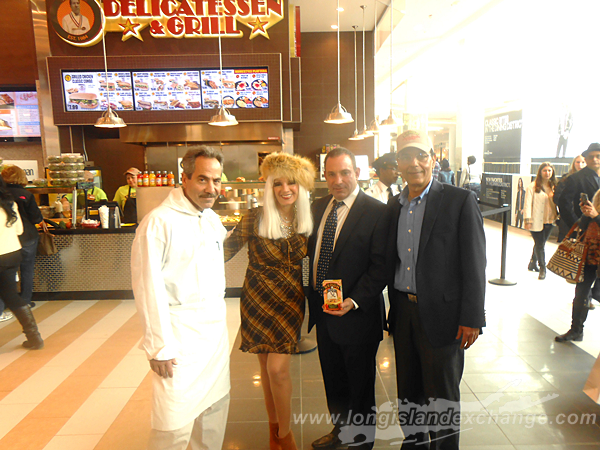 In 1984, The Original Soup Man opened its doors at 55th Street & 8th Avenue in Manhattan and quickly became a worldwide destination. Rated number one by Zagat and honored by the New York Times as “Art, not Soup,” it set the standard for innovation and excellence long before the famous “Seinfeld” soup episode made it a cultural icon. The company sells soup across America to grocery stores in their Tetra Pak cartons and at their The Original Soupman restaurants and food services. Shaquille O’Neal is an adviser and equity partner, as are Mr. October, Reggie Jackson and the award-winning actor, Jason Alexander. Lloyd Sugarman, co-founder of Johnny Rockets Hamburgers is their Chairman of the Board. SoupMan Inc.is a fully reporting public company trading under the symbol SOUP.