(Long Island, N. Y.) Everyone knows The Wizard of Oz, right? I mean, if you’re a modern parent, and you haven’t shown your kids this timeless classic by the age of four or five at the latest, you really should have Child Protective Services called on you. And everyone knows that Hollywood is creatively bankrupt and is desperately trying to cash in on nostalgia via remakes and prequels instead of trying bold new ideas and concepts that would, in the long run, save the industry from the overall slump that it’s currently experiencing, right?

Well, combine the two, and you get Director Sam Rami‘s (Spiderman and Evil Dead trilogies) newest film: Oz the Great and Powerful, a prequel to The Wizard of Oz that shows how that useless old coot in the original old film ended up on Oz to begin with, because everyone has been clamoring to find out for over 70 years now. Wait, no they haven’t.

Well, that didn’t stop Hollywood from trying to give it to you, anyway…in their own unique way. That is, with eye-searingly blissful CG visuals designed to wrest your attention away from the fact that this journey back to the magical land of Oz is fairly vapid otherwise, lacking in any real sense of character, personality, or substantial plot? That it is, like so many movies nowadays, all about style and not substance?

I don’t suppose I have to fill you in on the plot of The Wizard of Oz, do I? Dorothy? Kansas? The Ruby Slippers? Munchkins? The Wicked Witch? Of course I don’t. So let’s skip the setup and jump right to Rami’s prequel. Oz the Great and Powerful involved the man who will one day become the “Wizard of Oz,” a scrub magician in a traveling carnival named Oscar Diggs (James Franco), who is basically a con artist and a womanizer who is whisked away via a hot air balloon to the land of Oz, where he encounters Good Witch Theodora (Mila Kunis), who believes that he is the prophesied Wizard who will defeat the Wicked Witch who killed the king of Oz. Diggs, recognizing a chance to finally claim his own sense of greatness, goes along with it, never believing that he will actually have to live up to these lofty expectations and actually become a hero. And, of course, along the way, he’ll run into all sorts of characters, locations, and situations that should be familiar to fans of the original movie (and the book it’s based on). 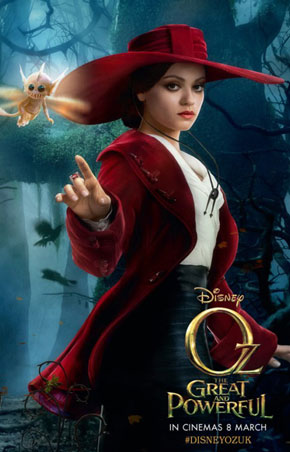 Yes, just like the fabled “man behind the curtain,” Oz the Great and Powerful does everything possible to provide distraction and misdirection to its shallowness…it painfully lingers over every pretty CG-laden shot while things constantly pop out of the screen to take advantage of the expensive 3D presentation (lamely attempting to justify your hundred-dollar 3D movie tickets), but when it comes to presenting actual characters you can relate to and care about, director Rami kinda glosses that over, giving a somewhat sterile feel to the proceedings. You will likely not really find yourself involved in their fates while your brain is rendered numb by essentially watching a 2-hour videogame, for all intents and purposes.

I suppose I should mention the actors…they do a good job of standing in front of green screens pretending to interact with things that aren’t there, I guess. However, James Franco’s terrible performance here almost single-handedly ruins the film, and Mila Kunis comes across as slightly mis-cast for the direction her character eventually heads in. Rachel Weisz and Michelle Williams (as good ol’ Glinda from the first movie) pop up as well, and do serviceable jobs in their roles, but again, they’re secondary to the CG.

Oh, and for you Bruce Campbell fans, yes, Rami gave him yet another cameo, and as usual, it’s pretty awesome but way too short. Supposedly Rami’s trademark Oldsmobile shows up somewhere as well, but I didn’t notice it anywhere.

Oz the Great and Powerful is not a terrible film, or even a bad one…on a base level, it’s entertaining, and even occasionally charming, I guess, but only in fleeting, small glimpses. Rami has shown much greater range with both story and character in the past, sadly, but here, much like other contemporary popcorn movies such as A Good Day to Die Hard or Jack the Giant Slayer, it’s a bland affair where CG stunts and set pieces come first and actors come second…or not at all. Just turn your brain off and enjoy the pretty pictures and you’ll do okay. Otherwise, watch the original Wizard of Oz. No, it’s not a deep, introspective character study, but it possesses a charm and sense of wonderment that all the CG in the universe cannot hope to replicate.