(Long Island, N. Y.) Pacific Rim was Amazing. AMAZING. I loved every second of it. A loving tribute to Japanese monster

movies, giant robot Anime, and about a dozen other things geek culture holds near and dear, Pacific Rim, created and directed by the awesome Guillermo del Toro, is the tale of a near-future alien invasion that occurs via an inter-dimensional portal located in the depths of the Pacific ocean that spews out skyscraper-sized creatures dubbed “Kaiju” (Japanese for “Great Beast”) that begin to spread death and destruction throughout the world.

Humanity unites and strikes back with tanks, planes, and missiles, but soon decides that something more effective (and way cooler) is required; powerful, giant combat robots called Jaegers (German for “Hunter”) that are so complex to pilot that they require two human beings working in consort, their minds linked Vulcan-style by a technological process known as “The Drift.” Only certain pilots are compatible to Drift effectively, and when Raleigh Becket (Charlie Hunnam) loses his brother while fighting a massive Kaiju in their Jaeger “Gipsy Danger,” Becket retires in despair, instead finding work building containment walls meant to seal out the monsters threatening humanity.

However, five years pass, and not only are the walls failing, but the Jaegers themselves are losing ground as newer and more powerful Kaiju keep appearing. Stacker Pentecost (Idris Elba), commander of the Jaeger forces, seeks out Becket to re-join the dwindling resistance in a plot to seal the inter-dimensional portal for good; however, in order to do so, Becket must find a new co-pilot to drive a refurbished Gipsy Danger. Will Pentecost’s adopted daughter, Mako Mori (Rinko Kikuchi), fit the bill, or will the hazards of establishing a reliable Drift with someone else after the painful loss of his brother, whom he was mentally joined with when he died, be too much for Becket?

Pacific Rim does it right- instead of starting out slowly and making you sit through a boring setup to establish the origin of the Kaiju War, the movie just drops you into the middle of things and fills you in as it goes along. It’s a completely organic time-saving measure that allows you to get to the movie’s main selling point – giant monsters and robots laying waste to entire cities – while leaving plenty of time for the story and characters to develop as the film progresses. I love this approach. 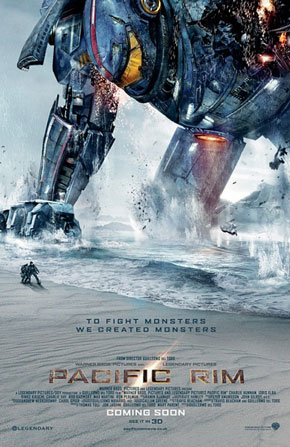 It’s amazing how Hollywood can constantly raise the bar when it comes to visuals; Pacific Rim is easily the most detailed, beautifully rendered, and fluidly animated CG-based film I’ve ever seen. And it’s backed by eye-popping design work and a great mix of physical sets and props whenever possible, giving the flick a gritty, realistic look and feel that really allows you to buy into the world that you’re watching. Both the Jaegers and the Kaiju are beautifully realized and move and interact with each other and their surroundings with a fluid grace and weight that is just poetry in motion. Every corner of the screen is packed with little touches that you might miss even with a dozen views; the city of Hong Kong, littered with neon, traffic, and scores of people, is a dense, textured landscape that is just fascinating to watch.

Of course, all of this would mean nothing if Pacific Rim didn’t deliver on the story and characters, but it does; the film is populated with people brimming with personality, each with their own motivations, loves, joys, and pain. The relationship between Raleigh and Mako is especially touching, and devoid of the usual attempts to shoehorn it into stereotypical romance; while there is attraction evident, the partnership ends up as more of a supportive friendship than anything else. Mako’s adoptive father/daughter relationship with Pentecost also works well, even though his overly-protective instincts toward her just annoyingly delay her inevitable ascension to Gipsy Danger’s co-pilot chair. Heck, there’s even a foil for Becket who’s an arrogant jerk who nonetheless becomes sympathetic by the end. It’s things like this that set Pacific Rim apart from the usual soulless big-budget garbage clogging up theaters during the summer.

Plus, the cast is rounded out by great roles played by Charlie Day, Rob Kazinsky, Max Martini, and the always amazing Ron Perlman as a pimped-out dealer in black-market Kaiju body parts.

So, overall, Pacific Rim is by far the best film of the summer, containing all of the city-destroying mayhem of Man of Steel (and then some) and supplementing it with the humanity that the new Superman movie was sorely lacking. Go see and support this movie for a number of reasons,

the most important of which being that I’m a fan of Guillermo Del Toro and would like to see both him and his films succeed.

Oh, you need more reasons? Okay…success at the box office would increase the likelihood of a sequel for Pacific Rim. I’m also a big fan of 2012’s Dredd, and sequels were indeed planned for that sci-fi masterpiece, but the fact that it bombed kinda made those sequels impossible.

PLUS, a non-sequel/remake doing well in theaters would maybe send a message to studios obsessed with remaking every property under the sun that maybe more original properties are worth investing in. Pacific Rim not doing well sends the exact opposite message. I know my wanting a sequel to Pacific Rim kind of goes against this point, but whatever. I like it.

And finally, the fact that Pacific Rim placed third in it’s opening weekend after the new Adam Sandler piece of slop tells studios that we want yet another sequel to Grown Ups to get made. That’s

probably the biggest crime of all. Get out there and watch Pacific Rim. Now.