(Long Island, N. Y.) Pain & Gain is one of those movies that are based on a true story that, upon viewing, you say to yourself, “Man, these

movies never stick to the facts. This is too crazy to be real.” But in this case, it IS.

Michael Bay directed this one, and apparently Pain & Gain is a pet project of his that he insisted upon doing before further ruining the childhoods of Generation X members by taking on yet another Transformers movie. However, when you strip Bay down to the basics by removing the nonstop explosions and heaping helpings of CG from his table, he’s actually a better filmmaker for it. Shocking, but true; sometimes limitations truly stimulate creativity. Hollywood’s history is replete with stories of great filmmakers who worked their ways up the ranks and started tanking when they finally got $100 million budgets. Heck, Pain & Gain’s $25 million budget is just a drop in the bucket compared to what bay is used to working with, but he makes the most of it.

Pain & Gain is a satire that tells the real-life story of Daniel Lugo (Mark Wahlberg), Adrian Doorbal (Anthony Mackie), and Paul Doyle (Dwayne Johnson), three dim-witted Miami bodybuilders who, sick of staring up at the wealthy and powerful, concoct a scheme to

kidnap a regular at their gym, a rude yet rich businessman named Victor Kershaw (Tony Shalhoub). The plan is to force him into signing over his fortune to them, and soon their plans include additional victims; before they know it, these brutal yet incredibly stupid individuals are lead down pathways to torture and murder, with two of them eventually landing on Death

Row for their crimes. 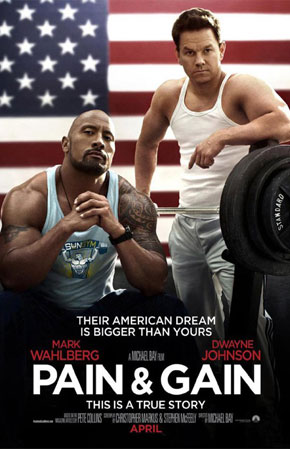 However, the (horrifically) interesting part of the story isn’t where the so-called “Sun Gym Gang” ended up, but how they got there- these guys make misjudgments and mistakes that would be hilarious if not for the fact that these guys were actually brutal murderers who nonetheless were brain-dead enough to conduct kidnappings while wearing bad Halloween costumes or actually returning blood-covered tools used to dismember some of their victims to the very store they purchased them from. Again, it seems too crazy to be real, but it is.

Of course, there is some underlying distaste to the proceedings, since actual real-life innocent people were killed by these guys and yet Pain & Gain is basically played off almost like a comedy; reportedly, the families of the victims of the “Sun Gym Gang” were none too pleased with this film, and with good reason. But for everyone else, how does Pain & Gain stack up as entertainment?

Well, it’s fun, but not perfect. Wahlberg and Johnson are an awesome combo, and I’d love to see them star in more movies together. They’re funny and have great chemistry together, and are a huge part of what makes Pain & Gain work. Tony Shalhoub also is a hoot, playing a slimy business snob who makes

it difficult for you to worry about him when he’s finally in a hot spot.

The film is fast-paced, funny, and generally just crazy. It’s a big departure from the more family-friendly fare that Johnson has been frequenting lately, that’s for sure. However, as it goes on, Bay seems to lose sight of the satirical aspects of the film and unfortunately falls back to form, relying on violence and action instead of staying focused on further developing the characters and story. Pain & Gain gives you a brief glimpse of greatness from Bay, but sadly, he snatches it away like a kid sent for a “time out” in the corner for acting out, only to run amok once again once the punishment period has ended.

It’s a shame that Pain & Gain eventually derails like it does, but until then, it’s a hell of an entertaining ride. If you’re looking for bizarre true-crime story that’s funny, hard-edged, gritty, and even slightly thought-provoking for a little while, I’d advise you to check it out.