(Long Island, N. Y.) When it comes to Paranormal Activity 4, I guess you could say what is old is new is old again, if that makes any sense. Written, directed, and shot by amateur filmmaker Oren Peli in his very own home, the original Paranormal Activity was the story of a young couple, Katie (Katie Featherston) and Micah (Micah Sloat), who are being spooked by a demon that would manifest itself at night while they slept. Wondering what the hell is going on, the couple start leaving a camcorder trained on their bed each evening, and each morning the resultant footage gets freakier and freakier. Eventually Katie is possessed, kills off Micah by pitching him like a lawn dart, and disappears for parts unknown.

It’s amazing how, when Paranormal Activity first burst onto the scene back in 2007, it gave the stagnant and status quo horror genre a major shot in the arm. The horrifying “found footage” tale of possession and things that (literally) go bump in the night had audiences screaming in fear, which made for an invigorating movie-going experience to say the least.

Of course, the fact that the first movie was shot for pocket change, coupled with the insane bank it made at the box office, ensured the world that we’d be getting a new installment of this profitable series every single year. Fast forward to 2012, and I’m now reviewing Part 4 and telling you that this series, like anything mined for all of its inherent worth, is starting to run dry; the horror genre is once again stagnant and status quo.

Let’s face it…the “found footage” genre, which is where the film is comprised solely of video shot by the characters and conveniently “found” after the fact so it appears that the events were somehow “real” has its limitations; among them is why people would be constantly filming themselves and somehow always catching the right moments at the right time to propel the story forward, batteries and hard drive space be damned. 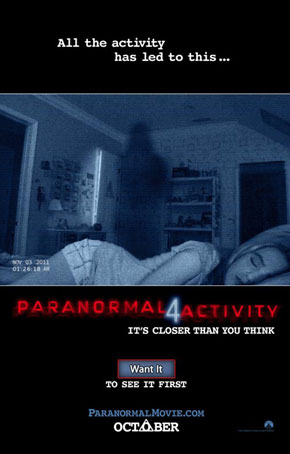 Yeah, so anyway, in Part 4 demon-possessed Katie is still on the loose with the kid she kidnapped at the end of Part 2, and now she’s…moved into a house in a suburban neighborhood? Yeah, ’cause that’s what satanic kidnappers do, right? But when Katie has to go to the hospital for some reason, the neighbors across the street have no problem taking in the “child” of this stranger for a few days. Enter “Robbie,” Katie’s “son.” Well, we all know he’s really her demon-possessed kidnapping victim, but whatever, I’m still trying to get over the idea of the family taking in a stranger’s kid like that, no questions asked. That’s just weird…and I’m saying this about a movie featuring demons and stuff.

So, naturally, all sorts of freaky stuff starts happening, and night by night the freaky stuff gets freakier and freakier…until Katie finally shows to pick up her kid, and, shockingly, she’s none too appreciative of this nice family’s charity. Killings ensue, leading to yet another sequel next Halloween. Whee.

Again, another Paranormal Activity will break the bank at the box office, and given the fact that these films cost little to make and can be shot on the crummiest, cheapest cameras possible, you can bet that, just like the lackluster “Saw” series before it, Paranormal Activity will be visiting us in yearly installments until the unknown demon at the center of its tale of evil finally succumbs to something even the evil dead have no defense for: dwindling profits.

I will say that the scares are still there, to a point, and that the acting is serviceable, although Katie is the least threatening bad guy in horror movie history…well, except when her face gets all demonic and CG-laden. Then she’s kinda scary, I guess. But the most shocking thing to me was the fact that teenaged main character Alex (Kathryn Newton) was actually played by a teenager instead of a 30 year-old, which most movies bizarrely seem to do lately (for a recent example, see Maggie Grace in Taken 2 for major lolz).

Otherwise, it’s paint-by-the-numbers Paranormal Activity action, folks. If you’re a fan of the series, go for it, but don’t expect the refreshing, terrifying rush you first experienced back in 2007. Me, I’m going to wait for the next Big Thing in horror to come along, wow audiences, and subsequently be run into the ground by overzealous studio marketing gurus. And so it goes, sadly.