(Long Island, N.Y.) I loves me some stop-motion animation. In this age of super-slick GCI cartoons, the sheer amount of labor and artistry that goes into your typical stop-motion film is truly awe-inspiring to behold. For those of you who aren’t in the know, stop-motion animation is…well, I’ll just let Wikipedia do the talking for me on this one:

“Stop motion is an animation technique to make a physically manipulated object appear to move on its own. The object is moved in small increments between individually photographed frames, creating the illusion of movement when the series of frames is played as a continuous sequence. Dolls with movable joints or clay figures are often used in stop motion for their ease of repositioning.”

Sounds like exhausting, maddening work, right? But that’s why I love it so; not only is it impressive in a technical sense, but such hands-on work inevitably produces little mistakes and warts

that, in part, gives such a production a unique charm. I love stop-motion animation.

Which brings me to today’s review- ParaNorman, a horror/comedy animated movie with an impressive cast of voice actors, including Casey Affleck, Tempestt Bledsoe, John Goodman, Bernard Hill, Leslie Mann, Christopher Mintz-Plasse, Kodi Smit-McPhee, among others. It’s a fun, funny movie with some nice morbid overtones, similar in feel to 2009’s wonderful Coraline, and with good reason: both movies were produced by the same American animation studio, Laika, and based on their track record, I’m going to have to be keeping my eye on these guys. They do good stuff. 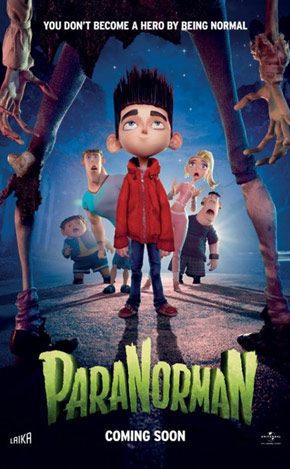 At first the premise of ParaNorman might not sound all that original- a New England kid named Norman (Kodi Smit-McPhee, star of the pointless Let The Right One In remake) is able to speak with the dead, just like the kid on The Sixth Sense. But it’s in the execution of this story where ParaNorman differs from the aforementioned movie; while living people ostracize and make fun of Norman for his abilities, he’s quite popular with the dead folk. His only living friend is the tubby and awkward Neil (Tucker Albrizzi), who is also the only person who actually believes in his ability to communicate with the dead. Life kinda sucks for Norman, but at least things couldn’t get much worse, right?

Wrong, actually. When his Uncle Prenderghast (John Goodman) issues a strange warning and then passes away, Norman eventually finds himself tasked with taking over his Uncle’s duties, which consist of defending the town he lives in from the curse of an ancient witch, long kept at bay from meddling in the affairs of the living. With the help of Neil (which is really like no help at all), Norman sets out to perform a ceremony to keep the evil dead at bay. Unfortunately, thanks to the interference of a school bully, it doesn’t quite work…which means that the live folks in Norman’s town are bound to have a bad day if he doesn’t do something about it.

ParaNorman is beautifully animated, easily ranking up there with the best of the stop-motion field while retaining a creepy, one-of-a-kind look and feel that really drew me in. It’s solidly scripted as well, with a fairly interesting plot and some good laughs, and even a genuine scare or two, which is surprising given that this is targeted at kids. Why? Well, unlike Pixar, whose movies are almost always appropriate for little kids but contain jokes that easily go over their heads so grownups can appreciate them as well, Laika Studios’ movie’s aren’t quite as accessible to all ages. By that, I mean that there’s some weird, questionable, and slightly adult content that perhaps wouldn’t make films like Coraline and ParaNorman something to show to the REALLY young. Well, if you’re a lame parent, that is. Me, if I had kids, I’d LOVE to ween them on spooky Laika fare like this. After all, not every kid should be sheltered and cultivated into an uninteresting little wuss.

plot and acting are all really well-done also, and as I previously mentioned, the movie is funny as well, which helps soothe the ache in my heart after another recently-released stop-motion film, Aardman Animations’ The Pirates, sadly failed to live up to my expectations, ending up fairly flat and unfunny.

So, kid or adult, I recommend ParaNorman highly. Check it out.