(Long Island, NY) On a cold January day in Virginia, men and women of the guided-missile destroyer USS Donald Cook’s (DDG 75) engineering department stood at attention both somber and quiet. The bitter cold chills of the wind broke the silence of their awards-at-quarters on the ship’s flight deck. While most service members eagerly await receiving awards, this was certainly not true for Electrician’s Mate 3rd Class John Chavez-Sanchez. This was the day he did not anticipate — being awarded for his bravery and assistance in the aftermath of the terrorist attack on USS Cole (DDG 67) on October 12, 2000. 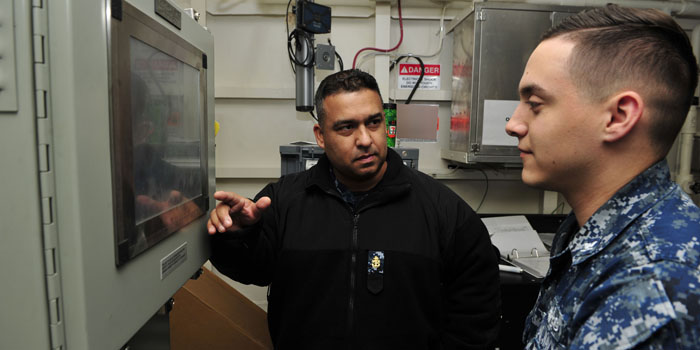 “You figure my first NAM [Navy and Marine Corps Achievement Medal] is that one that I am most excited for, but I didn’t smile,” said Chief Electrician’s Mate John Chavez-Sanchez, from Bay Shore, New York, now assigned to USS Gerald R. Ford’s (CVN 78) engineering department. “Nobody smiled. Nobody clapped. Myself and the crew from the Cook didn’t want any type of praise. We played a key role, but we didn’t want to take any credit.”

On that fateful day, Cole pulled pierside in Aden, Yemen to begin refueling. It was mid-day when two suicide bombers pulled a small boat along Cole’s port side and detonated explosives leaving a 40 foot-by-60 foot hole at the waterline of the ship. Seventeen Sailors died and another 39 were injured.

While on its maiden voyage, a mere two nautical miles away, USS Donald Cook got word on the events that had took place.

“We got sent to GQ [general quarters] and no one knew why at first,” said Chavez-Sanchez. “I was going through my checklist as the repair locker electrician when the CO [commanding officer] came on the 1MC and announced that the Cole was attacked. He told us, ‘This is what we train for. Get ready for war’.”

Chavez-Sanchez said a quick prayer. Shortly after, the CO announced Cook’s air-wing was going to provide air support. A few more hours passed, now he and the engineering department were to muster on that same flight deck in which he was awarded his first NAM.

“We were asked to volunteer to be a part of the first group to help assist with damage control efforts,” said Chavez-Sanchez. “Everyone raised their hand. Everyone wanted to help. It was the single most example of comraderie I had ever seen.”

Ten hours after the attack Chavez-Sanchez was on the first rigid-hull inflatable boat to be sent to aid the vulnerable Cole.

“The waters were clear; there was no debris,” said Chavez-Sanchez. “You couldn’t tell an attack just happened until we passed right by the hole. I could see clear into the ship. That’s when I smelled it — the rotting, decaying, foul smell of death.”

Aboard Cole, Chavez-Sanchez and his group were asked if they could handle the situation. Again, everyone raised their hands in agreement. Some grabbed a flash light or a radio, but all of them applied a small amount of vapor rub right under their noses to combat the smell.

“We were making our way around to assess what we needed for the damages,” said Chavez-Sanchez. “The only light or ventilation in the ship came through that hole where the blast happened. We knew we were by the galley; it looked like crumpled up aluminum foil. Then I saw bodies, that’s when everything hit me.”

At that sight, the 21-year-old Chavez-Sanchez realized the magnitude of the situation. He responded with a sense of duty by volunteering for anything he could do — fighting fires, dewatering flooded spaces, standing shoring watch, and security watch. However, his primary mission as an electrician’s mate was to bring up the generators and restore power to the ship.

“Throughout the day and night, there was constant flooding,” said Chavez-Sanchez. “We were getting woken up to combat the flooding. It was hard to sleep most nights.”

Chavez-Sanchez and the many who volunteered from the Cook began a watch rotation of 48-hours on, 48-hours off, serving time and standing watch on both missile-guided destroyers.

“The day we heard ‘USS Cole, underway’ was emotional for our crew,” said Chavez-Sanchez. “We all celebrated because we knew we did our job for the ship to be ready to make her way back to the states.”

Once the Cole was home she began her intensive repairs and eventually became deployable again.

“After 18 years, I still remember that day, that time period,” said Chavez-Sanchez. “I carry that story with me. It became a motivation to stay in the Navy and I continue to train everyone around me. ‘Train how you fight’ became personal to me.”

Within the same year of the 18-year anniversary, Chavez-Sanchez’s story came full circle.

“While in Norfolk, the Cole was moored on the same pier [as the Ford],” said Chavez-Sanchez. “I froze for about two minutes. In that time everything rushed back — the memories, the emotions. I saw it and I prayed. I didn’t want to tell my story because I didn’t want the recognition, so I had to keep moving.”

While Chavez-Sanchez may never forget, he is now ready to share his story so that it may inspire his newest shipmates on the Ford with the camaraderie and brotherhood he formed with his former shipmates in the wake of the Cole tragedy.