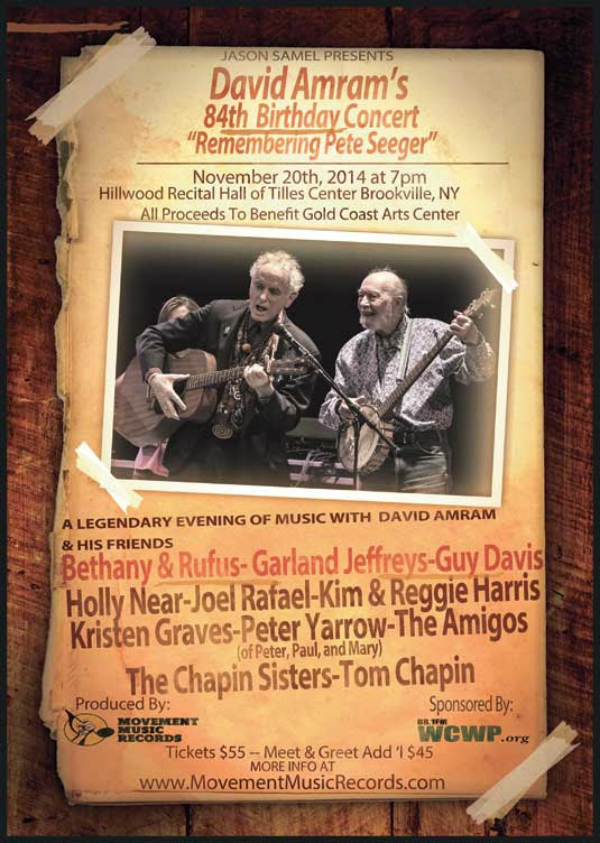 This family of musicians feels honored to mark David Amram’s 84th birthday with a celebration of the life of their mutual friend, Pete Seeger. In years past these musicians would regularly be found sharing the stage with Pete. They continue to share the stage with him through remembrance and acknowledgement of his spirit’s presence in all their music and activism. We credit Pete as a great organizer and musician who blazed a path for so many by indelibly linking his music and activism. We thank him for bringing songs like Guantanamera and Wimoweh to the United States, for turning the traditional song “I Will Overcome” to “We Shall Overcome” and teaching it to Dr. Martin Luther King. Pete Seeger brought American Folk music into the homes of millions of Americans and those in countless countries around the world. As we remember Pete we equally acknowlege Toshi, Pete’s wife of seventy years who passed six months before him. Their devotion to each other and to their work was larger than life and lives on in across the globe in many ways.

Tickets for the show go on sale Thursday, October 2nd for $55 in advance and can be purchased by visiting www.brownpapertickets.com.

There is also a VIP meet and greet with the performers available for an additional $45.

For more information about Hillwood Hall at the Tilles Center an LIU CW Post, visit www.tillescenter.org and www.wcwp.org.

About the Gold Coast Arts Center
The Gold Coast Arts Center is a 501(c)(3) organization dedicated to promoting and supporting the arts through education, exhibition, performance and outreach. For over 20 years we have brought the arts and arts in education experiences to tens of thousands of people throughout our region free of charge. Through our School for the Arts, which offers year-round classes in all visual and performing arts to students of all ages and abilities, Free public art gallery, Concert and lecture series, and Outreach programs, we are able to bring artist residencies, after-school programs, school assemblies, teacher training workshops and parent-child workshops to students, senior citizens, teachers and others in underserved communities throughout our region. Our year round film screening and discussion series and the Gold Coast International Film Festival, now in its 4th year round out the offerings for tens of thousands of regional residents. The Arts Center is an affiliate of the John F Kennedy Center for the Performing Arts: Partners in Education Program and National Gallery of Art, both located in Washington DC.