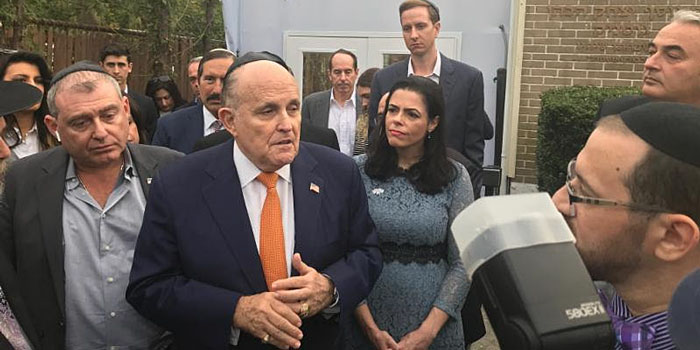 NEW YORK, NY – America’s Mayor, Rudy Giuliani, has endorsed Chele Farley (R, C, Reform) in her bid for the United States Senate. Giuliani offered his support after a visit to the Rebbe’s Ohel this past Thursday, November 1. Giuliani and Farley both attended a prayer service organized by Rabbi Shea Hecht, Chairman of the NCFJE organization, for the victims of the Pittsburgh shooting.

Over the weekend, Giuliani recorded a robo-call in support of Chele Farley for Senate that will go out to households across the state today. You can listen to the recording here.

In the recording, Giuliani said, “Chele Farley has experience negotiating business deals and will work with President Trump to get a better deal for New York. Her qualifications and experience will make her a great Senator who will put New York first.”

Giuliani’s endorsement is a last-minute boost to the Farley campaign in her bid to unseat incumbent Senator Kirsten Gillibrand. This after the latest Siena College poll released yesterday showed the race with a nine-point swing in Farley’s direction.

“With a lack of affordable housing, an exploding homeless population and a crumbling transit system, New York is at a dangerous tipping point. Mayor Giuliani knows that we need a Senator in Washington whose only priority is working for New York,” said Farley. “Thank you, Mayor Giuliani, for your generous endorsement, everything you have done for New York and your continued service to our country.”

Chele Farley is an outsider with over 25 years of experience in the private sector. She is the Republican, Conservative and Reform Party candidate for U.S. Senate. Farley lives in New York City with her husband Richard and their three sons. For more information about U.S. Senate candidate Chele Farley, please visit www.CheleFarleyforSenate.com.