(Long Island, NY) Suffolk County Legislature Presiding Officer DuWayne Gregory on March 4 hosted a lottery in which the 3,739 individuals attaining a score of 95 on the written exam to become a Suffolk County Police Officer were ranked in priority order to advance to the next stages of the selection process. The lottery was live-streamed from the William H. Rogers Legislature Building in Hauppauge.

The additional phases of the selection process include a personality and psychological assessment, physical fitness test, medical examination, a polygraph examination and a background investigation.  After the testing and background review are completed, candidates who successfully complete all parts of the selection process will be considered for appointment in the same sequence in which their names were drawn in the lottery. 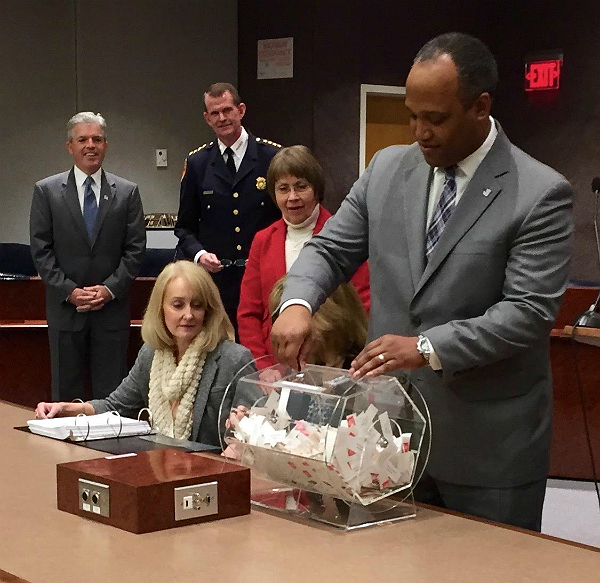 Suffolk County Legislature Presiding Officer DuWayne Gregory pulls a name at the March 4 lottery in which the 3,739 individuals attaining a score of 95 on the test to become a Suffolk County Police Officer were ranked in priority order to advance in the next stages of the selection process. Gregory hosted the lottery at the William H. Rogers Legislature Building in Hauppauge, from which it was live-streamed. Photo Credit: Suffolk County.

More than 13,000 individuals passed the test, which was administered in June 2015. Of the 3,739 candidates who scored 95, a total of 216 were black, 613 were Hispanic, and 61 were Asian. Combined with other minorities, 25.9 percent of all applicants in the lottery were minorities.

Following the first lottery, a second lottery was held ranking the 365 candidates who attained a score of 95 on the Spanish-speaking test.

“I was deeply honored to join Suffolk County law enforcement on this occasion, as this lottery is a critical step in the selection process for the next police class,” said Presiding Officer Gregory. “It has long been an important priority of mine that Suffolk County work to increase diversity in the police force, and I’m pleased to announce that nearly 26 percent of applicants qualifying for today’s lottery are minorities. I congratulate all these candidates on their top scores, and I encourage those who were not ranked highly to remain persistent and never give up on your dream of serving in law enforcement. There is nothing more noble than your willingness to put your lives on the line every day to protect not just your own families, but also every family here in Suffolk County.”

“The police department would like to thank the Legislature for making their facility available to allow the live streaming of the police candidate lottery on March 4,” said Suffolk County Police Chief Stuart Cameron. “This was the first time that live streaming was employed in an effort to make the process more accessible, transparent and open.”

“I would like to thank County Executive Steven Bellone, Presiding Officer DuWayne Gregory and Police Chief Stuart Cameron for attending the lottery and making the first selection of candidate names,” said Stan Pelc, Director of Examinations for the Civil Service Department.

“This lottery has provided a level playing field to those who want to join one of the finest police departments in the country,” said County Executive Steve Bellone. “I can say without hesitation that I am proud of the Suffolk County Police Department at all levels of the organization and welcome those with the courage and commitment to serve our residents.”

The names of the candidates in the order in which they were drawn will be posted this week at http://suffolkcountyny.gov/civilservice.