Bochner, drafted and sent to Europe to fight at age 17,  describes the liberation of a concentration camp in vivid detail; his approach to the Ohrdruf concentration camp, the first Nazi concentration camp liberated by U.S. troops. Bochner served in France, Germany, Austria and Czechoslovakia and was awarded the Bronze Star for his service, a part of which was served under U.S. General George Patton. 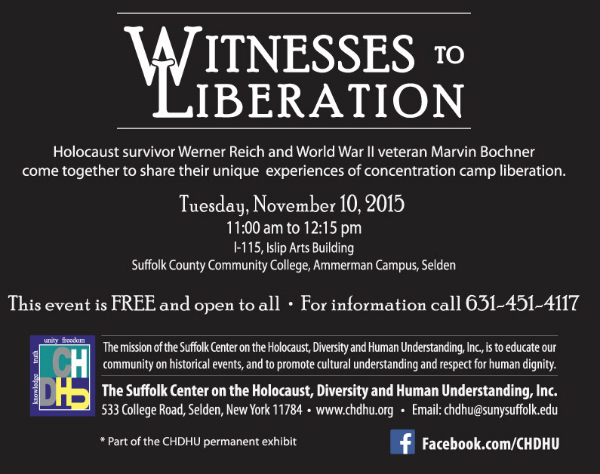 Werner Reich, now in his 90’s, endured the atrocities of four concentration camps between the ages of 15 and 17 years old.

Reich’s father, while living in Berlin in 1933,  lost his job because he was Jewish. Reich’s family, soon after, left Berlin for Zagreb, Yugoslavia. After Hitler invaded Yugoslavia and Croatia in 1941, Reich was forced to to live in hiding with two families until 1943, when he was found, arrested and beaten by the Gestapo. Reich was imprisoned and later transferred to Terezin concentration camp.