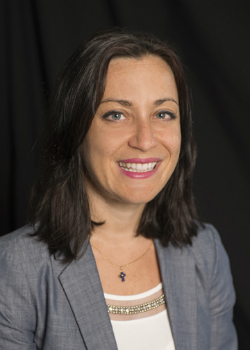 Monaco, who was recently promoted to full professor, is advisor to the college’s Italian Club and the faculty leader of the Suffolk County Community College Summer Study Program in Sorrento. The Study Abroad Program offers a wonderful opportunity to all students interested in spending a month in Italy, learning the language and exploring some of the country’s most beautiful cities including Rome, Florence, Naples and the Amalfi Coast.

The award is presented annually to a woman of Italian heritage who has demonstrated excellence in her field of expertise, made a significant contribution to advancing educational opportunities for students, and who herself has earned the Doctor of Philosophy degree. The award, established in 1978 by the New York State Grand Lodge, Order Sons of Italy in America.

The Cornaro Award is given in honor of Elena Lucrezia Cornaro, a 17th century Venetian who was the first woman recorded as having been granted a doctorate. She earned this recognition from the University of Padua where she studied mathematics, philosophy and theology from 1672–1678. Born in 1646 to an aristocratic family, whose ancestry dated as far back as the Roman Empire, Cornaro was tutored throughout her early life in the arts, sciences, languages, rhetoric and logic; she was the first woman to apply to study theology at the University, where she presented her work before a panel of judges and scholars on June 25, 1678. Upon earning her degree, Cornaro was appointed to the faculty of the University in mathematics, a position she held until her premature death in 1684, at the age of 38.