(Long Island, NY) Public Education Advocate, Diane Ravitch will be a featured guest on Tom Needham’s The Sounds of Film this Thursday at 6 P.M. on 90.1 FM, WUSB. Diane Ravitch is a nationally-known historian of education, an educational policy analyst, a New York University research professor and was the former assistant Secretary of Education under President George H. W. Bush. She is also the author of many books including The Language Police: How Pressure Groups Restrict What Students Learn, The Death and Life of the Great American School System: How Testing and Choice Are Undermining Education and Reign of Error: The Hoax of the Privatization Movement and the Danger to America’s Public Schools. She is one of the county’s leading voices against charter schools, common core and standardized tests. In addition, she has been a strong supporter of Long Island’s Opt Out movement. 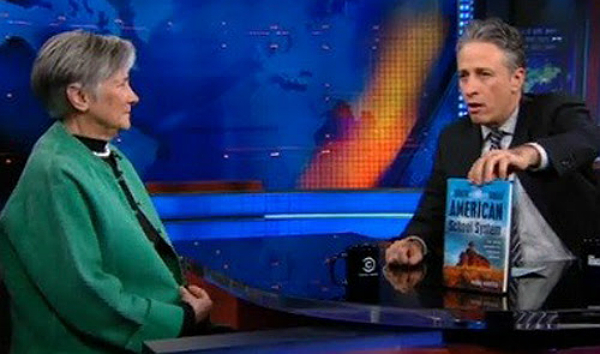 Ravitch has argued, “Testing is not teaching. It steals time from instruction. Making it so important that it leads schools to narrow the curriculum, cutting funding for the arts, eliminating social workers and counselors, cutting recess and physical education. Making testing so important that it leads to states and districts gaming the system, to schools shedding low-scoring students, to cheating, to teaching to the test, and to other anti-educational actions.”

Also joining Tom Needham on the program is South African Anti-Apartheid Activist, Constitutional Judge and writer, Albie Sachs, and director Abby Ginzberg, who will be discussing their Peabody winning-documentary Soft Vengeance: Albie Sachs and the New South Africa. The film reveals how as a young lawyer, Albie defended those committed to ending apartheid in South Africa. For his actions, he was imprisoned in solitary confinement in Cape Town, tortured through sleep deprivation and forced into exile. In 1988 he was blown up by a car bomb set by the South African security forces in Maputo, Mozambique, which cost him his right arm and the sight of one eye, but miraculously he survived and after a long year of rehabilitation in England, he recovered. Returning to South Africa following the release of Nelson Mandela, Albie helped write the new Constitution and was then appointed as one of the first 11 judges to the new Constitutional Court, which for the past 20 years has been insuring that the rights of all South Africans are afforded protection.

Albie Sachs once explained what motivated him,” We were fighting against a system, a system of injustice. We weren’t fighting against a race. We were fighting for a better country, a better society. That system, which had not only oppressed and imprisoned black people in terms of their hopes and their possibilities, but imprisoned whites in fear, narrowness, arrogance and greed. That’s what liberation meant. That’s what emancipation meant.”

The Sounds of Film is the nation’s longest-running film themed radio show. For over 27 years, the program has delivered a popular mix of interviews and music to listeners all over Long Island, parts of Connecticut and streaming live on the Internet at wusb.fm. Recent guests include William H. Macy, Michael Moore, Billy Joel, the Nation’s Katrina vanden Heuvel, comedienne Lisa Lampanelli, Rev. Jesse Jackson, Nile Rodgers, composer Howard Shore and author/activist Chris Hedges.