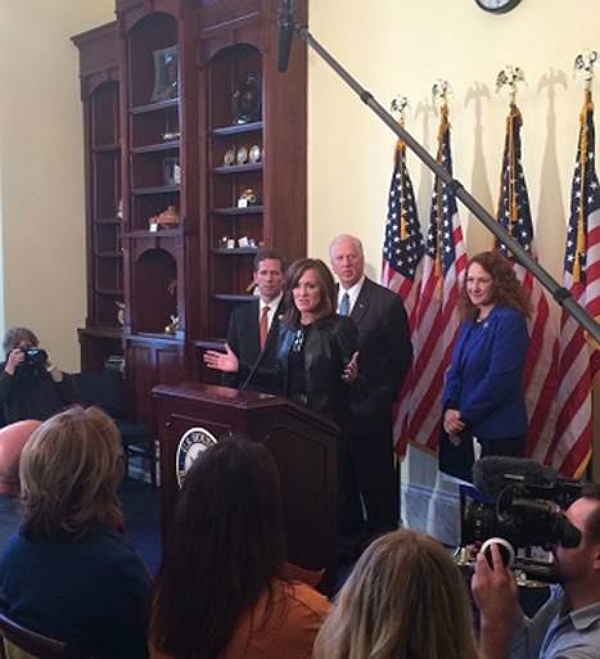 “This bill is about taking common-sense steps to enforce current law,” said Rice. “Violent criminals, domestic abusers and people with dangerous mental disorders are already legally prohibited from buying guns, but we can’t enforce that when anyone can avoid a background check by going to a gun show or ordering online. As a former district attorney and lifelong prosecutor, I’ve held the hands of too many grieving mothers and fathers not to do anything I can to prevent gun violence, and this bill is an opportunity to do just that. It’s bipartisan, it’s common sense, and I urge all my colleagues to give it the support it deserves.”

“This anti-criminal, pro-Second Amendment bill will help keep spouses, kids and communities safe by preventing dangerous people from getting guns,” said Mike Thompson. “Background checks are the first line of defense in our efforts to keep guns from criminals, domestic abusers and the dangerously mentally ill, and Congress should fortify that first line of defense by passing our bipartisan bill to close the system’s loopholes.”

“There is no single law that can put an end to mass shootings or gun violence, but there are certainly proactive steps we can take to keep guns out of the hands of felons, domestic abusers, and the dangerously mentally ill.  To that end, I have introduced bipartisan background check legislation called the King-Thompson Public Safety and Second Amendment Rights Protection Act.  My legislation extends the current background check system to all commercial sales.  It also improves state and federal recordkeeping to strengthen the background check database (NICS), and authorizes a commission to examine incidents of mass violence in the U.S.,” said King. “When background checks are used, they keep guns out of the hands of people we all agree shouldn’t have guns.  It is estimated that four out of 10 gun buyers do not go through a background check when purchasing a firearm – meaning those with criminal records can easily bypass the system.  As government officials it is our responsibility to protect our citizens, and when it comes to gun violence we must do more.  I will continue to push for action on background check legislation in Congress, and support efforts to reduce gun violence.  The overwhelming majority of Americans want to see action, and we owe it to the victims and their families to prevent such tragedies from occurring again.”

“This is a common-sense, bipartisan proposal that creates a comprehensive system for background checks while not infringing on constitutional rights. This measure – as well as efforts to end straw purchases and ensure that the dangerously mentally ill cannot lawfully get access to a gun – have my full support,” said Fitzpatrick.

“A stronger background check system on commercial sales will make our communities safer and help keep guns out of the hands of people who shouldn’t have them,” said Meehan. “This legislation will help save lives while protecting the rights of law-abiding Americans.”

“As a strong supporter of the Second Amendment and responsible gun ownership, I am proud to co-author this commonsense legislation that will help keep firearms out of the hands of criminals and the dangerously mentally ill.  This bipartisan bill takes critical steps towards stemming gun violence in our communities and schools by closing loopholes in the system that all too often allow firearms to end up in the wrong hands.  This is a critically important cause that transcends party lines, and I hope Congress and the President will move quickly to put this law on the books,” said Dold.

“This bill is a real commonsense approach to keeping our communities safe. As an avid hunter and gamer, I am pleased to co-sponsor legislation that keeps our communities safe without disruption to responsible gun owning citizens. I urge Congress to move quickly on the passage of this legislation and look forward to the benefits of this law,” said Bennie G. Thompson.

“The current loopholes that allow criminals and the dangerously mentally ill to buy guns over the internet or at a gun show without a background check put our families at risk,” said Esty. “It’s time for Congress to listen to the voices of over 90 percent of Americans, including the majority of gun owners, and expand background checks to cover every commercial gun sale.”

Under the legislation, the current background check system would be expanded to require comprehensive and enforceable background checks on all commercial gun sales, such as those made at gun shows, over the internet or through classified ads. Studies show that every day where background checks are used, the system stops more than 170 felons, some 50 domestic abusers, and nearly 20 fugitives from buying a gun. However, no system is in place to prevent these same prohibited purchasers from buying identical guns at a gun show, over the internet, or through a newspaper ad with no questions asked because background checks are not required for these kinds of sales. The King-Thompson bill closes these loopholes.

The legislation also supports the Second Amendment rights of law-abiding gun owners. It bans the government from creating a federal registry and makes the misuse of records a felony, punishable by up to 15 years in prison. It provides reasonable exceptions for firearms transfers between family members, friends and hunting buddies. It allows active military personnel to buy guns in the state in which they are stationed. It permits interstate handgun sales from licensed dealers. And, under the bill, background checks would continue to be conducted in the same manner as they have for more than 40 years.

The bill also help strengthen the National Instant Criminal Background Check System (NICS) by incentivizing states to improve reporting of criminals and the dangerously mentally ill and by directing future grant funds toward better record-sharing systems. The bill will reduce federal funds to states that do not comply.