(Garden City, NY) Area residents joined with labor unions and progressive advocates on Wednesday in rallying outside of Senator Jack Martins’ office, protesting his refusal to support a proposal by Governor Andrew Cuomo to create a system of publicly financed elections. 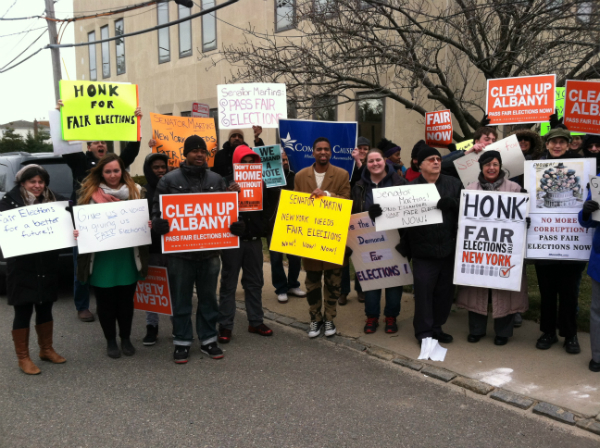 Area residents joined with labor unions and progressive advocates on Wednesday in rallying outside of Senator Jack Martins’ office protesting his refusal to support a proposal by Governor Andrew Cuomo to create a system of publicly financed elections. Photo Credit: LIPC.org.

“After years of corruption and broken government, Governor Cuomo has included a Fair Elections system of lower contribution limits and small matching funds, ensuring we’ll see more candidates running and more participation from small contributors. Polls consistently show that a vast majority of Republicans, Democrats and Independents support these reforms. Today, I’m asking my Senator, Jack Martins, to stand with his constituents and not the special interests that seem determined to keep the status quo. Senator Martins: Keep Fair Elections in the budget,” said Port Washington resident and Common Cause member Phil DePaolo.

The Fair Elections proposal would create a public matching system for small dollar campaign contributions, giving everyday voters an equal voice in the political process. Candidates who opt into the system wouldn’t have to rely on big money donations from well-connected insiders and can instead focus on catering to their constituents. Cuomo included the proposal in his 2014 Executive Budget, which is currently being debated by the legislature.

Helen Manas, member of the Long Island Progressive Coalition stated, “We have been fighting for over 10 years to end the corruption in Albany. Our Long Island communities are suffering because residents’ voices are being drowned out by the big money contributions or corporations and CEOs. Without the constraints of fundraising our politicians can work on issues like jobs, education, environment and healthcare.”

Martins’ opposition to the Fair Elections proposal highlights his record of embracing Albany’s pay to play culture. This week Senator Martins’ constituents received a mail piece that reported that Martins pushed a bill that would grant legal immunity to catering companies that stole employees’ tips after receiving $56,000 in campaign contributions from industry groups.

“Senator Martins must listen to the voice of his constituents and the residents of Long Island, and not to big money donors like the catering industry. The people of the North Shore deserve a clean state government free of the corruption and undue corporate influence. We, as constituents of Jack Martins, want and need a true voice in our state election system. If Senator Martins cannot deliver the elections we deserve, if he refuses to support the Fair Elections proposal in Governor Cuomo’s budget, then we need a senator who will.”, said Ruth Shalom Great Neck resident.

The proposal has the support of three of the four leaders in the ongoing state budget negotiations, including Governor Andrew Cuomo, Senate co-leader Jeff Klein and Assembly Speaker Sheldon Silver.