(Long Island, NY) Suffolk County Community College will confer degrees on a record 4,306 students at its 2015 commencement – the College’s 53rd — on Sunday May 17. 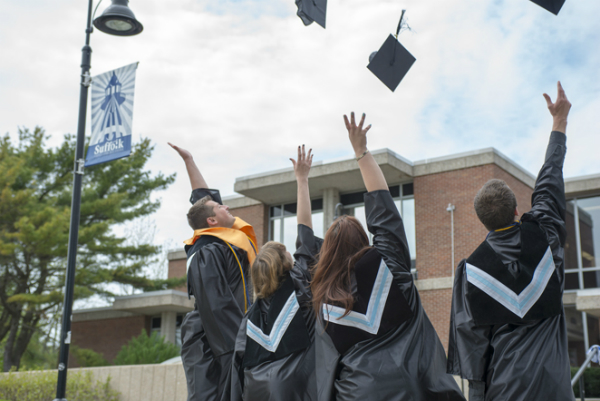 Keynote address
The College will forgo a keynote speaker and instead focus on the graduates and student speakers.

Satoko Matthews representing the Eastern Campus
Satoko Matthews, of East Patchogue, served as the Vice President and finally the president of the Culinary Arts and Baking Club. She also served as captain of the Culinary Knowledge Bowl team and led the team to a win at the American Culinary Federation (ACF) Regional Competition and second place at the national competition. Satoko also served as a senator at the Eastern Campus representing the Culinary Department. She is also a recipient of the prestigious SUNY Chancellor’s Award.

Her community service includes assisting in the launch of a program through the local ACF Eastern Long Island Chapter’s “Lunch Break for Kids, ” a month-long initiative that involved visits to local schools from Pre-K through high school to educate students about eating healthier. Satoko was also instrumental in the ACF’s launch of the SEED (Sustainable East End Development) charitable event last fall.

Andrea DiMaria representing the Michael J. Grant Campus
Brentwood’s Andrea DiMaria graduated from Brentwood High School in 2012 with an Advanced Regent’s Diploma and was urged to attend Suffolk County Community College by her parents who are strong advocates for community college education. Andrea has two sisters, Danielle who graduated from Suffolk County Community College in 2011 and Gabrielle who is a current Suffolk student.

Andrea’s enthusiasm for being involved has made her a significant part of campus life at the Michael J. Grant Campus.  Andrea was an executive in the Campus Activities Board and took part in hosting common hour events to boost student involvement in campus activities.  She was an outstanding peer mentor and supported new and continuing students as well as assisted in the planning of new student orientation with the Orientation Planning Committee. Andrea was also an active member of the Rotary Volunteer Club. She is graduating with an Associate’s Degree in Liberal Arts.

Steven Curcio representing the Ammerman Campus
Patchogue’s Steven Curcio is the 2015 Daniel DePonte Student of the Year.  In addition to being an honors student, a student senator, and a member of Phi Theta Kappa (PTK) Honor Society, Steven is a Get There From Here scholar, a member of the PTK All New York Academic Team, a Distinguished Student Award winner, a SUNY Chancellor’s Award winner, and a Stay on Long Island scholarship winner.  He is also the winner of the Jack Kent Cooke Scholarship, a prestigious award given to less than 100 students nationally.