Vertullo, 34, of Babylon, coached the Suffolk County Community College Sharks to the National Championship last month, a repeat of his 2010 accomplishment. 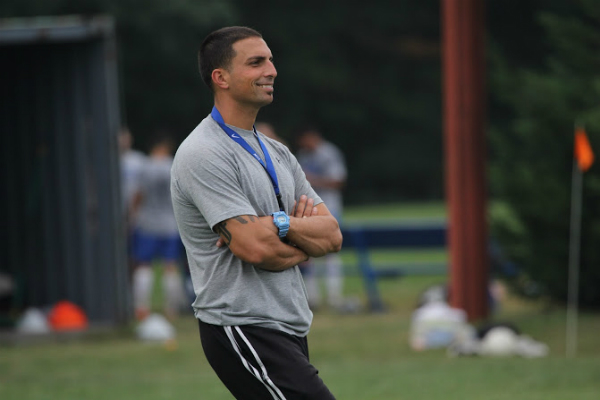 Entering the junior college Final Four as the fourth seed with a 19-4-0 record, Suffolk played number one seed and host, Herkimer Community College, on November 14.

A twelfth minute goal by Romario Hulea was all the Sharks needed to avenge their 2013 loss to Herkimer in the National Championship game and advance, 1-0.

The Sharks continued as underdogs in the national title game on November 16 against number two seed Richland Community College from Texas, who previously defeated them 5-2 in September. Joseph Lopez and Hulea scored for the Sharks and goalkeeper Jon Zapata, named championship game MVP, made six saves in the second half to preserve Suffolk’s 2-1 lead and secure the championship title.

“There are so many factors that are involved in winning multiple national championships. Consistency, recruiting, experience and creating a family atmosphere within the program are the key components. The success of the program has also helped in the recruiting process of potential student-athletes wanting to leave home to play at Suffolk even without the convenience of campus housing. However, just bringing in talent is not always good enough, ” Vertullo, who was named Coach of the Tournament, said.

“My student-athletes have always given me 100% and have done everything I’ve asked of them. The family atmosphere we create makes the student-athletes want to perform for one another and they hold each other accountable. They also draw on my experiences from coaching in eight Final Fours in the last 14 years. Each year, we pull positives and negatives out of each Final Four experience and bring that into the next year’s tournament to further be prepared and to put the student-athletes and the program in the best possible position to succeed,” Vertullo said.

As a player, Vertullo played in the Long Island Junior Soccer League (LIJSL), for the North Babylon Bulldogs and Massapequa TNT. Frank also competed for three years on the LIJSL Select Team and two years on the Eastern New York ODP.

Vertullo played at Dowling College from 1997 to 2000 and was Conference Rookie of the Year, All-Conference three times, captain of the team for three seasons and starting center back. He also played for the New York Freedoms of the United Soccer Leagues (USL) in 2002 and 2003.

Vertullo served as Dowling’s assistant coach from 2001 to 2006, helping lead the Golden Lions to four NCAA Division 2 Final Fours and the 2006 National Championship.

Vertullo took over the Suffolk Community College men’s program in 2007 and has led the Sharks to five Region XV titles and two National Championships, been honored as Region XV Coach of the Year four times and NSCAA National Coach of the Year in 2010. Vertullo also won the New York Metro Intercollegiate Soccer Officials Association (NYMISOA) Sportsmanship Award in 2008.