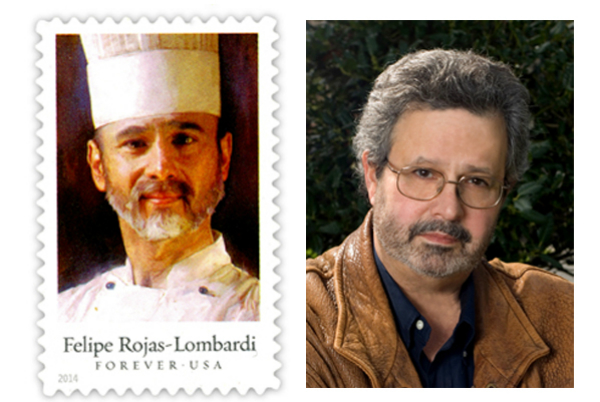 The USPS engaged artist Jason Seiler to illustrate Chef Felipe Rojas-Lombard’s portrait and asked the deceased chef’s family for photographs of the chef.  It was the chef’s family who directed them to Chef Felipe’s good friend, Suffolk County Community College Professor of Photography and Northport native Harold Naideau who had captured images of the chef for a bestselling cookbook: The Art of South American Cooking published by Harper Collins 1991. The artist used one of Naideau’s portraits of the celebrity chef to create the work that ultimately became the official stamp.

“Felipe died too young and too soon,” said Naideau.  “I can imagine, with his amazing personality and the recent popularity of chefs on television, that he would have had his own cooking program. He just had so much more to offer; not only to the culinary world, but to his family, friends and for the appreciation of cuisines from around the world, especially Peru and South America. I think it was all of that, the whole package, which made Felipe more than a chef, more than a great chef, but a great person.  He was a good friend that I will certainly never forget; so it’s more than appropriate that his portrait will grace a Forever Stamp.”