(Long Island, N.Y.) I’m sure by now you’ve heard that Project X, the product of first-time director Nima Nourizadeh and starring a trio of relative unknowns, is rather reprehensible from a moral standpoint, and for the most part, the film’s detractors are right. Project X is pretty much packed to the gills with highly unlikable characters, blatant misogyny, and rampant drug use without any repercussions (physical or legal), and all these unsavory elements are tied together by one of the most clichéd and tired story-lines ever conceived.

And yeah, watching all this left a bad taste in my mouth, which would normally make me feel like an old fogey if not for the fact that almost everyone else in the movie review biz is complaining about it as well. Now, normally my reviews are a little out of step with the established norms, but frankly, it fills me with a bit of relief this time that there are plenty of people out there taking issue with Project X’s pointless, overly hedonistic nature.

However, I’d also be lying if I said I didn’t find myself laughing here and there throughout this film. Mind you, I’m not saying that Project X (which is NOT a remake of the 80’s Matthew Broderick space-chimp flick, a joke that was old the first time I heard it) is a GOOD movie…I’m just saying that it’s an okay flick with some solid chuckles that tries way too hard to be edgy and cool. Way, WAY too hard.

As I said somewhere earlier in this review (I’m not sure where, but this is only my fourth paragraph…it can’t be THAT hard to find), the plot of Project X is as overused as they come- three high school losers, Thomas (Thomas Mann), Costa (Oliver Cooper) and J.B. (Jonathan Daniel Brown), throw a party in an attempt to be cool and score with girls. That’s it. But, of course, the party quickly gets out of control and basically destroys the entire neighborhood they hold it in, all while an army of teens are running all over and having sex, taking drugs, destroying property, and generally acting pretty much like little degenerates, to the point that even the local SWAT team can’t handle them. 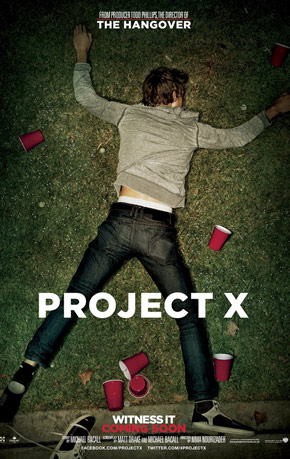 DAMN, I really just said that, didn’t I? Am I old? Or just mad that I never attended a party like that? Granted, I don’t think anyone really has (Project X IS just a movie, after all), but if such a party were ever to be actually held and I found myself invited, I’d like to think that I wouldn’t run headlong into the middle of it in my underwear, waving a bottle of Jack in one hand and a fistful of cocktail weenies in the other.

Anyway, if Project X boasted main characters that weren’t such annoying little idiots, and if their horrible actions had any consequences for them whatsoever, it might be easier to overlook some of the extremes that the film goes to. But our three leads, discovered by the producers during a nationwide “talent” search specifically looking for people with little to no acting experience whatsoever, are bratty, devoid of charm, and just not likable in any way, with Oliver Cooper’s character being especially deserving of a slow and painful demise by way of acid bath or firing squad.

Oh, and did I mention that Project X belongs directly in the “found footage” genre? In other words, the movie is supposed to be comprised of camcorder video recorded by the teens as they just party, party, party. Now, the recent sci-fi film Chronicle found a way to delve into the found footage genre and do a very fresh take on it. Project X doesn’t- it’s just a grainy, shaky eyesore full of forced situations where the dude with the camera happens to be in the right place at the right time, all of the time (and the overall level of film-making and editing on display is rather amateurish). *Yawn*

Still, like I said, there are some laughs to be had in Project X, and in the end, this saves it from the wrath of a Chris Boyle Long Island Exchange Movie Review one-star rating, and it finds itself elevated to, say, a one-and-a-half star rating instead. Hey, it’s better than nothing…if it was as morally evil as it is but with NO laughs, I might have had to issue my first zero-star review. Still, I can dream of a day when a film will be bad enough to make that happen…