(Long Island, N.Y.) I’d been looking forward to Prometheus more than any movie in recent memory; to the point that I had imposed an embargo upon myself regarding all online spoilers and reviews…I wanted to go into Prometheus knowing as little as possible. Starting development by director Ridley Scott as a prequel to his original 1978 sci-fi/horror classic Alien, the film eventually took a turn during the scripting phase into something altogether different, in Scott’s words. The director made a point of telling the press that this was no longer a prequel to Alien, but that it “shared some of its DNA.” In other words, it was supposed to be a different tale, but set within the same universe.

Still, expectations for Prometheus were running high, with many people believing that Scott was hoodwinking the public in an effort to maintain an aura of secrecy around the production. These expectations were also bolstered by the fact that, after several unpopular sequels and crappy Alien vs. Predator spin-offs

that had damaged the franchise, the Alien series was finally being revisited by its creator. Oh, wait, but it’s NOT supposed to be an Alien movie, remember?

Well, I’ve seen it, and as much as Scott tries to say otherwise, it IS an Alien movie. Sort of. You see, Scott in no way lied about it not being a prequel, but at the same time there are multiple elements that DO tie Prometheus into the grand Alien mythology, but not in a way that I found at all satisfying (in particular, the ending is a direct tie-in, but was fairly lame and felt VERY tacked on). What we’re left with is a film with amazing casting and a fantastic first hour, but a film that eventually delves into stupidity, plot holes, unanswered questions, and lazy storytelling in its second half. Prometheus is both great, yet very, very flawed; I enjoyed it, but at the same time I kinda wish it was never made. I prefer the mystery generated by the first Alien movie as opposed to the tiny bit

of goofy quasi-Alien stuff they put in here. They either should have tied it directly into the first Alien or just gone COMPLETELY off in another direction.

The story involves archaeologists Elizabeth Shaw (Noomi Rapace) and Charlie Holloway (Logan Marshall-Green), who discover cave symbols in various unrelated cultures, all separated by centuries of time. The symbols correspond to a star system real far away, and the duo are convinced that an alien race called “Engineers” had created humanity and this “puzzle” is actually an invitation to come and say hi. Funded thanks to the dying wishes of zillionaire Peter Weyland, the elderly CEO of the Weyland Corporation (played by Guy Pierce in a Halloween mask; why couldn’t they hire an ACTUAL old guy to play this part?), a scientific expedition sets forth in the spaceship Prometheus to planet LV-223 (don’t get excited; the planet in Alien was LV-421) to discover the possible origins of life on Earth. 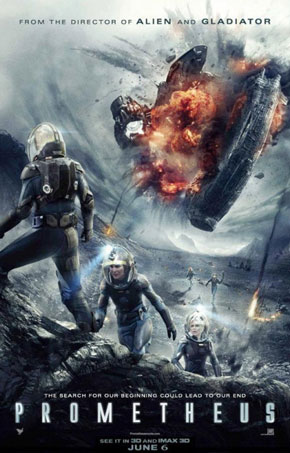 Of course, things don’t turn out as planned. Introduced in the original Alien, the “Engineers” (known to Alien fans as the “Space Jockeys”) appear to all be long dead when the crew of the Prometheus arrives at LV-223. The scientists discover a temple-like structure containing a series of tunnels that lead to a mysterious chamber. This chamber houses containers filled with a living black fluid that we discover is actually a horrific bio-weapon of the Engineers that apparently somehow destroyed their creators by altering the DNA of those exposed to it, creating vicious monsters…monsters that appear to have burst out of their chests…

Soon, Dr. Shaw has to determine what poses the biggest threat to the Earth- the Engineers’ deadly bio-weapon, threats from within the crew of the Prometheus itself, or the fact that all of the Engineers on LV-223 just might NOT be dead after all…

As I stated earlier in this review, the first hour of Prometheus is amazing. The acting is superb, the story gets you involved, and there’s a dense atmosphere of tension as our team heads out into the unknown. But when we hit the halfway mark, the film just starts to fall apart; the most glaring flaw is that characters suddenly start doing really stupid, sub-horror movie-style things that no one would ever do…examples:

1) “Hey, a threatening monster! Come here, buddy! Hi there! Hey, wow, aren’t you…AARRRGGHHH!!!” 2) “Okay, I’m gonna take my helmet off on an alien planet with a toxic atmosphere…just because. Oh, good thing I can actually breathe here.” 3) “Ok, let’s kill ourselves just because some raving mad British chick says so! Whee!” 4) “I have an insanely detailed holographic map of this temple and am in constant contact with home base, but I’m going to get hopelessly lost anyway.” 5) “I’m a genius-level scientist but I suddenly have a tentacle growing out of my eyeball. Maybe if I ignore it it’ll go away.” 6) And so on and so on…

Questions are asked that are never answered and gaping plot holes abound…you really get the sense that most of the answers were held off for a possible sequel (that, for all we know, might never be made), but that’s just lazy storytelling. A film should be able to stand on its own, instead of disguising poor script writing and gaps of logic as being “deep.” I mean, why did the Engineers create us, and later want to destroy us? Why was there a Xenomorph mural in the Engineers’ ship, and why was it morphing for no reason? Why, when we finally meet an Engineer, is it just a mindless roaring Frankenstein monster instead of the representative of an intelligent, space-faring race that goes around sowing the seed of life on various planets? Oh, and where did the Aliens from the first movie come from? They had such a specific life-cycle (Facehugger to Chestburster to Xenomorph) that the vague explanations given in Prometheus hardly connect the dots at all.

Still, the good almost makes up for the bad…the cast overall is incredible, with standouts being the great Michael Fassbender (X-Men: First Class) as David, a quirky android crew member whose motives and moral compass are ambiguous (really, isn’t that the case with almost all the androids in this series?); Noomi Rapace (The Girl With The Dragon Tattoo) as a scientist conflicted between her search for the meaning of life and her strong religious faith; Charlize Theron (Monster) as the usual creepy company representative who tags along on these missions (although she does possess layers as the movie goes on); and Idris Elba (Thor) as the working-class (yet wise) captain of the Prometheus.

Also, the film is just drop-dead beautiful to look at. The bio-mechanical look of the environments of Alien are somewhat retained, yet given a more streamlined, metallic look; the physical sets are a marvel and the CG is unmatched, except for perhaps Marvel’s The Avengers. The pace is blazing, with no time wasted in getting the story rolling (something I expected…sadly, today’s ADD-afflicted audiences couldn’t cope with the slow, deliberate pace of 1978’s Alien), the dialogue is tight and natural, and the plot is very intriguing. Overall, Prometheus is masterfully made and starts out as a classic; but that second half…

Still, Prometheus is a must-see, if not for what it is, but at least for what it tries to be. It’s a high-concept story that asks a lot of questions, and it’s better to see a film take a shot at being intelligent and fail than films that revel

in just being stupid. You’ll enjoy yourself more if you erase any thoughts of Alien from your head before going into the theater, because while Ridley Scott claims this isn’t a prequel to Alien, at its very heart it IS…and it fails on that level. So, with Alien expunged from your expectations, you’ll probably have a better time, but you’ll still have to contend with all the storyline problems that are totally UNRELATED to Alien. But again, it’s worth it for the glimpses of pure greatness Prometheus affords you at its best moments.