LONG ISLAND, NY – For Boyd Melson, professional boxer and Captain in the US Army Reserves, being co-founder of the non-profit organization Team Fight to Walk is a labor of love. The group’s mission is to raise awareness and to make all possible efforts to fund a cure for spinal cord injuries in the United States.

In 2002, while a junior at the United States Military Academy at West Point, Boyd Melson met Christan Zaccagnino. Christan was paralyzed in 1993 at just ten years old when she broke her neck after diving into a backyard pool. It didn’t take long for the two to fall in love.

“She shared her dream of walking again,” Melson said. “That dream became mine. I told her, ‘I’ll never stop fighting unless you stop fighting.’” 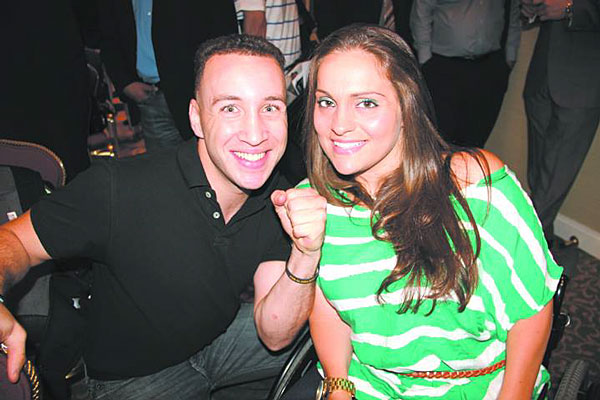 Boyd Melson, professional boxer, with Christan Zaccagnino, who was paralyzed in 1993 when she broke her neck after diving into a backyard pool. The two co-founded Team Fight To Walk; Melson donates all his purses to help raise funds for American’s first Spinal Cord Injury Trial.

The two co-founded Team Fight To Walk. In December 2013 it became an official 501c3 Non-Profit Organization. To date the organization has raised $300,000 to help cure paralysis due to spinal cord injury.

Three weeks ago, Melson who has been a professional boxer since 2010, started Pushups for Paralysis. Modeled after the Ice Bucket Challenge, which had everyone talking about ALS raising more than $100 million for the organization, Pushups for Paralysis’ goal is to raise both funds and awareness through social media. Each participant is challenged to do 10 pushups, call out others to participate then donate $10 to TeamFightToWalk.com. If they are unable to complete ten, participants are asked to donate an additional $1 for each incomplete pushup. For example, if only six pushups are completed the donation would be $14. The goal is to have 500,000 people complete the challenge, raising the $5 million needed to bring the trial to the United States. 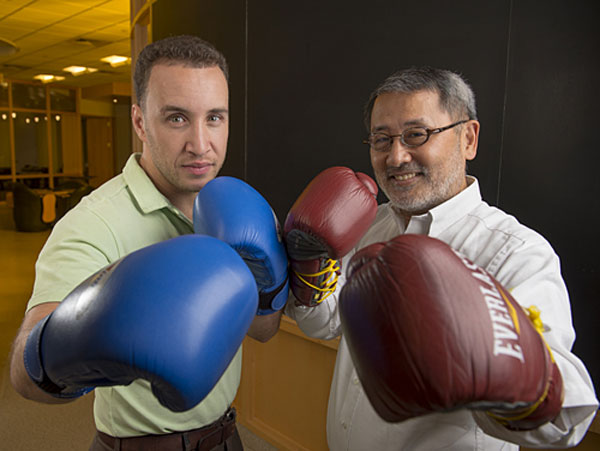 “The trials include four hospitals,” Melson said. “Mt. Sinai in Manhattan, Kessler Rehabilitation Center in West Orange, NJ, Jefferson Memorial Hospital in Philadelphia and North Shore-Long Island Jewish on Long Island. There would be ten patients in each location. Stem cells would be injected into the spinal cord above and below where the injury is.”

“Dr. Wise Young originally performed these trials in China,” Melson said. “The results were that 15 out of the 20 people operated on can now walk ten meters or more with a walker. For most, bladder function returned. We are now trying to bring these trials to the United States.” 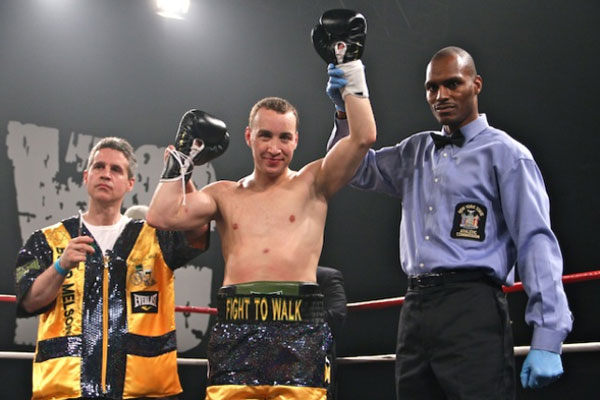 Boyd Melson Beats Hector Rivera In 44 Seconds In NYC. Melson who has been a professional boxer since 2010 donating all his purses to help raise funds for American’s first Spinal Cord Injury Trial. Photo by Carlos Suarez.

“We have a lot of great people stepping up to the challenge,” Melson said. Including Tina Cervasio, the post-game reporter for the Knicks, Ray Lewis and Eric LeGrand who was paralyzed in 2010 when he was playing collegiate football for Rutgers and broke his neck in a tackle. LeGrand has since regained movement in his shoulders and sensation throughout his body.

If you want to get involved it’s easy, Melson said. Just make a video and say “Team Fight to Walk, My name is (blank) and I’m doing 10 pushups for people paralyzed and fighting to walk.” After completing the pushups call out to others. And, of course, don’t forget to donate to Team Fight to Walk. One social media you can use hashtag #PushupsForParalysis.

“Our motto is, ‘Curing Spinal Cord Injuries one punch at a time,” Melson said.