(Long Island, N.Y.) Are you looking to read a good book this summer? Or heck, why not. write one? I’ve got you covered. I caught up with an incredibly inspiring Massapequa Park mom and writer Dina Santorelli who is celebrating the release of her first novel Baby Grand. Here, I chat with Dina about the publishing process. If you ever had the desire to start writing that novel you’ve been thinking about for years than this just might inspire you.

Can you tell me a little bit what your novel is about?

Sure! Baby Grand is a thriller, which is my favorite genre. I like suspenseful and fast-paced stories, especially about ordinary people who find themselves in extraordinary circumstances. Here’s the official book blurb for Baby Grand: 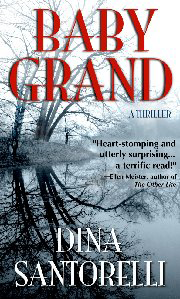 In Albany, New York, the governor’s infant daughter disappears without a trace from her crib at the Executive Mansion. Hours later, newly divorced and down-and-out writer Jamie Carter is abducted from the streets of Manhattan. Jamie is whisked upstate, where she is forced by her captor, Don Bailino, an ex-war hero/successful businessman, to care for the kidnapped child in a plot to delay the execution of mobster Gino Cataldi – the sixth man to be put to death in six years by hardliner Governor Phillip Grand. What prevails is a modern-day thriller about family ties, loyalty, murder, betrayal, and love that’s told in deftly interweaving narratives that follow the police investigation of the missing Baby Grand, the bad guys who took her, and the woman who found the strength to protect her.

Summer is the perfect time to start reading a good book-and writing one! How long ago did you get the idea for your novel and when did you start writing it?

I actually got the idea for Baby Grand in the mid-1990s, which is when I was devouring thrillers by John Grisham, Michael Crichton and James Patterson, among others, while riding the New York City subways and buses to and from my office in Manhattan (I worked as a fulltime editor). I don’t know exactly when the idea for Baby Grand came to me, but it was around that time. I’d get lots of ideas for books – I guess New York City will do that to you – and I’d jot them down to work on at a later time. Fast forward about 15 years. Now I’m a suburban mom with three kids, and a successful freelance writing career, and all I can think about are those partial novels and story ideas that lay dying on my hard drive (there’s actually a line in Baby Grand about that – my heroine, Jamie Carter, is a freelance writer as well). I decided it was now or never, but how can I focus on fiction with three kids and a career? I did the only thing I could think of. I went to graduate school. There, I knew I would be forced to write “for homework.” I had grades to keep up, professors to keep happy. I knew going back to school would force me to put the novel “first” – where it needed to be. Four years later, I graduated from Hofstra University with a Master’s in English and Creative Writing and the first third of the manuscript for Baby Grand completed. Eight months later, an agent would read that first third and sign me. I truly believe if I hadn’t gone back to school, the novel would still be one of those things I “needed to get to one of these days.”

Writing a book, being a mom-oh my goodness! How on earth did you find the time?

Okay, so now it’s 2009, and I’m out of school. For the next six months, I try to work on Baby Grand, but I’m having trouble again. Without a professor hanging over me, I had fallen back into my life – you know, kids, work. I had been hired to work on a nonfiction title, Good Girls Don’t Get Fat, authored by Dr. Robyn Silverman, which was taking up a lot of my time. And when that was done I was designing my daughter’s elementary school yearbook. There was always something else I needed to do. I worried that my partial manuscript for Baby Grand would never be finished and would gather dust like the others.

Landing an agent was the best thing that could happen to me. Now I had incentive to put the novel first again, because somebody was waiting for it. And because I know I’m deadline oriented, I gave her a date for when I’d hand the completed manuscript to her. I just made it up. End of June. Boom. Now I HAD to get it done, right?

Panic set in. Writer’s block. Procrastination. I decided to start a blog that I called Making ‘Baby Grand,’ which I thought might help me get through the difficult times and help me network with other writers in the same boat (it did).

Finally, it was June, and I had asked for a six-week extension, because I was struggling so much with getting it done. Finally, I just put my foot down. I decided that I was going to write 1,000 words a day, every day. No excuses. Just sit down and bang it out. And that’s what I did. I worked in the morning or at night and spent time with the kids during the day. I put off my vacations until the end of summer. Six weeks later, Baby Grand was born.

Did your family support you when you said you were going to pen a novel? What was your family’s reaction?

My husband is forever supportive. Always has been. I’m very lucky that way. Although he is probably one of the most practical and level-headed people I know, I could tell him that I was going to become an astronaut this year, and he would not only believe me, but would support me. And my kids? Truth be told, they didn’t really care much about Baby Grand in the beginning. They just knew that their mom was “working on a book,” whatever that meant, but I don’t think they totally grasped the concept that their mother would be an author. They knew I wrote for magazines and for newspapers such as Newsday, but it didn’t sink in that I would write “a real book.” They just knew I was busy. Busier than usual. In fact, I remember finishing Baby Grand and telling them that I would be starting another novel, and their reaction was “OH, NO!” You know kids… They just want their Mom to concentrate on them and nothing else. But now that the book is out, I think they are very, very proud of me. They see that people are reading it. 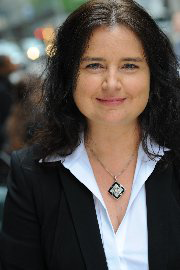 My youngest son, who’s ten and doesn’t really care about anything other than riding his bike and eating French toast for breakfast, came up to me after school the other day and said one of the teachers yelled to him in the hallway, “Hey, Jack, I’m reading your mom’s book!” He said to me, “It was cool.” Now, we’ll all be at Ralph’s for ices, and I’ll pull out my smartphone and say to the kids, “Should we see where Baby Grand is on Amazon’s best seller list? Do you think we kicked 50 Shades of Grey out of the top spot yet?” And we all laugh. I love sharing in this excitement with them and also with my own parents, who never really “got” what I did for a living. Having a book out, though, everyone seems to understand.

Tell me how exciting it is to finally have it out there (I need motivation!)

It is very exciting, but also a tremendous relief. I think I’ve been stressing about this book – just getting it done and getting it out there – for so long that I forgot how it feels to totally relax. Originally, my agent and I had planned to traditionally publish Baby Grand, but I made the decision in January to self-publish. The explosion of eBooks and the self-publishing industry was just too difficult to ignore. And when I made that decision, I felt some of that stress lessen. And then when Baby Grand finally came out at the end of May as an eBook, and I downloaded it, and the formatting seemed fine, and people were downloading it with ease and liking it, the anxiety disappeared altogether. Now, I’m truly enjoying the excitement while trying to promote the book as best as I can.

How can we find it/buy it?

Baby Grand is available for Amazon Kindle and Kindle apps. In the fall, it will be available for other eReaders and as a paperback.

So what’s next for you? Do you think you’ll write another novel?

But, of course! I’ve got all those story ideas to get to! I’m currently working on my second novel, a stand-alone thriller titled, In the Red, which stems from another idea I came up with sometime in the mid-1990s. I hope to have it done by the end of August, which means it’s back to 1,000 words a day, end-of-summer vacationing and my kids waiting patiently for their mother every day to close her laptop to go swimming. Happy summer!

Dina Santorelli -is a freelance writer/editor who has written for many print and online publications, such as Newsday, First for Women and CNNMoney.com. She served as the “with” writer for the nonfiction title, Good Girls Don’t Get Fat (Harlequin, 2010), and is the current Executive Editor of Salute and Family magazines for which she has interviewed many celebrities, including James Gandolfini, Tim McGraw, Angela Bassett, Mario Lopez, Gary Sinise and Kevin Bacon. You can follow Dina on Facebook, Twitter, Goodreads and on her blog. Baby Grand, her first novel, is available on Amazon.