(Long Island, N. Y.) Pointless, pointless, pointless…can you say pointless? Hollywood, in all its creative bankruptcy, is choking on pointless remakes in recent years, churning out carbon copies of movies that were, for the most part, usually pretty good-to-great the first time around. But the horror of constantly having to come up with something new, coupled with the desire to cash in on nostalgia, has compelled studios to keep the retreads rolling (retreads…rolling…tire humor, get it??). However, when you start remaking films such as 1984’s Red Dawn, whose highly- topical subject matter (for 1984, that is) isn’t even relevant in today’s world, then you know you’re in trouble.

Written and directed by the great John Milius (known for selflessly giving the world Arnold Schwarzenegger’s first true starring role in the delightful family film Conan the Barbarian), Red Dawn played upon the paranoia generated by the Cold War and the ever-looming red threat of the Soviet Union.

Based on the premise that the USSR was actually invading American soil, Red Dawn chronicled the struggle of the Wolverines, high school students turned underground guerrilla resistance fighters. It was a solid and quite memorable entry into the 80’s Action genre that boasted a fun cast and, despite being somewhat hokey and implausible, it was made all the more gripping by the fact that the Russians actually were the big, bad bogeymen in those days. 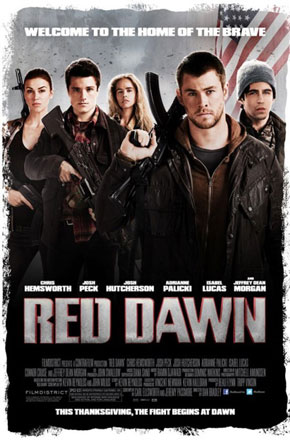 Fast-forward to 2012. The Iron Curtain has fallen, the Soviet Union is no more, and the automation and destructiveness of modern warfare has all but ruled out the concept of invasion between Superpower nations. In today’s society, we don’t live in fear of enemy paratroopers raining from the sky in suburban America; we’re more worried about some terrorist leaving a suitcase nuke in the shopping mall down the road. But, despite this being the case, some idiot thought it was just a FANTASTIC time to remake Red Dawn, but swapping the Russians for the Chinese as the vile invaders of US soil this time.

Oh, wait! China has like, what, a billion people living there? People with wallets and eyes? Eyes that can watch movies, and wallets full of money to buy tickets to do so? Better not offend them by making them the baddies in our new invasion flick! But when Hollywood can cleverly swap those Chinese flags and insignia with North Korean ones (because North Korea has an army big enough to conquer the United States, apparently) via CG in post-production, you can rest assured that the grosses will be safe, and all those nice Chinese moviegoers will be able to experience this crappy and forgettable action movie along with the rest of the world.

Populated with a very pretty cast consisting of Chris Hemsworth, Josh Peck, Josh Hutcherson, Adrianne Palicki, Isabel Lucas, Connor Cruise and Jeffrey Dean Morgan, what we get with the Red Dawn remake is the original Red Dawn, but played on fast-forward. It hits the same beats and plot points as the original, while adding in some stupidity and sacrificing even the marginal character development the Milius movie had. Also missing is the slow transition of the kids from being innocent acolytes to battle-hardened pros, the hardship of having to scavenge for food and supplies while on the run, and an overall sense of total desperation that the original conveyed so well.

In contrast, the cast of the remake scurry into the woods after the initial invasion, and Hemsworth’s character, an ex-Marine, gives them basic training in the brush that turns them from Xbox Live junkies to born-again killing machines in the space of what appears to be hours. Then they visit their pals in the city and get all the guns and gear that they need, no problem buddy!

The only thing that really makes the new Red Dawn at all compelling is the presence of Hemsworth, who is actually proving himself to be a fairly effective and charismatic actor without having to fall back on the safety net of his popular Thor role. Sadly, he didn’t play Thor here, which would have been cool – seeing him flying through the skies swatting North Korean paratroopers with his mystical hammer would have ruled all – but even as a mere mortal, Hemsworth holds his own as an action hero. The rest of the cast, however, was pretty much instantly forgotten.

Taken on its own, Red Dawn doesn’t even make any sense. North Korea successfully invades the United States in conventional ground warfare, and does so totally by surprise? In this day and age of unmanned drones, smart guided missiles, and pinpoint satellite surveillance? It just makes the film impossible to buy into. The action scenes are at least done well enough, but just when the movie starts feeling like it’s finally finding its feet and has a story to tell that might actually start differing from the source material its’ been flawlessly aping up until this point, it abruptly ends. It’s incredibly unsatisfying and, honestly, quite stupid.

So, another day, another pointless remake…what’s next? Robocop? Ha, that’s a good one. Wait, they’re seriously remaking Robocop? Damn it!