(Long Island, N. Y.) So Resident Evil: Retribution wasn’t that hot. And after five installments in the series, it ended in yet another cliffhanger, too. So, considering the fact that this movie was a hit at the box office this weekend, it looks like yet another sequel’s coming for sure. Wheeeee.

For newbies to the series, Resident Evil is a adaptation of the hit series of Survival Horror video games by Japanese developer Capcom. The games are, for the most part, great. The films, produced, written, and usually directed by Paul W. S. Anderson, are not. Anderson, for the uninitiated, is perhaps the premier purveyor of mindless style-over-substance/intelligence in the movie biz today. Just an awful, awful human being, aside from his one fluke; 1997’s Event Horizon, which is pretty much awesome. Since then, I’ve been waiting for him to achieve a similar level of brilliance. I’m still waiting.

The Resident Evil movies are very loosely based on the games; main character Alice, played by Anderson’s wife, Milla Jovovich, battles against the evil Umbrella corporation, a multi-national conglomerate responsible for a world-wide viral outbreak that has transformed most of the Earth’s population into zombies and other assorted monsters.

More than any other installment of the Resident Evil film series, this one just seemed so totally by the numbers. Nothing of any consequence happened. Characters from the previous movie are mentioned in passing and then never show up again,leading you to wonder what the hell happened to them. And Umbrella has this MASSIVE underwater testing complex that had exact scale recreations of New York, Moscow, and Raccoon City (a city from the games), not to mention millions and millions of clones of people on a conveyor belt, all for testing purposes of Umbrella’s viral weapons. It just made no sense. 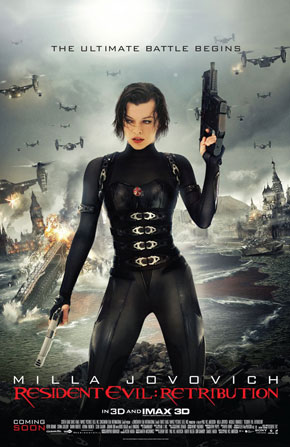 Speaking of clones, why bring back clones of half of the people killed in the first movie, just to have most of them do nothing of any importance?

Oh, and in addition to yet another cliffhanger, we also get super-powered Alice back. You see ,early in the series, Alice is injected with the mutagenic “T-Virus,” which, instead of transforming her into a monster, gives her insane super-powers. So, we got a stick-thin super model now able to plow through hundreds of powerful creatures without breaking so much as a partial sweat. Honestly, it was very annoying to have such an invincible protagonist, one especially hard to buy as such considering that Milla Jovovich has the body of a 12 year-old boy. It came as a relief when she had those powers taken away in the beginning of the fourth film of the series, but at the end of Retribution she gets ‘em back thanks to series baddie Albert Wesker (Shawn Roberts) to help him prevent the extinction of humanity. Welcome back, Super Alice. Whoopee!

Honestly, I can’t wait to see the difference, because even though she had no “powers” for most of this movie, Alice was still somehow able to punt zombies 20 feet through the air and do spinning aerial back flip kicks while gunning down four other targets simultaneously and even survive getting punched directly in the damn heart, Terminator-style. Hell, I was stunned that Milla Jovovich’s director/husband allowed her to actually lose a fight in this film, but of course two seconds later she’s back to saving the day once again, so whatever. It was of no consequence.

The much-touted 3D effects were, of course, non-existent and not worth the $40 it adds to the ticket price. But you can see what’s going on at least, unlike most 3D action films where everything is blurred to death. Fans of the games will be happy to see the inclusion of several favorites, such as Leon S. Kennedy, Ada Wong, and Barry “Jill Sandwich” Burton . Unfortunately, these fans will be disappointed to discover how poorly/under-utilized these characters are, and devastated over how utterly atrocious the acting is across the board. Even Jovovich, an actress I’ve seen do good work in the past, is more wooden than a pirate’s peg leg here.

On a positive note, I think this was the first time I’ve ever seen Michelle Rodriguez dolled up all girly-like, and she was actually pretty hot. She seemed to have fun playing against type as well…it’s a shame she was also under-utilized.

Despite my almost non-stop hating on Resident Evil: Retribution, which is well-deserved, I still get a perverse sense of guilty pleasure out of watching these movies. Perhaps it’s because I’m a fan of the games; perhaps it’s because I’m a fan of action/sci-fi movies; or perhaps it’s just that I can find fun in even the crummiest flick imaginable. Whatever it is, Resident Evil: Retribution will not change your pre-conceived notions of the series based on your experience with previous installments; if you liked Resident Evil 1-4, you’ll like 5. If you hated them, you’ll hate this, and will likely hate the 200 sequels to follow. And so it goes.